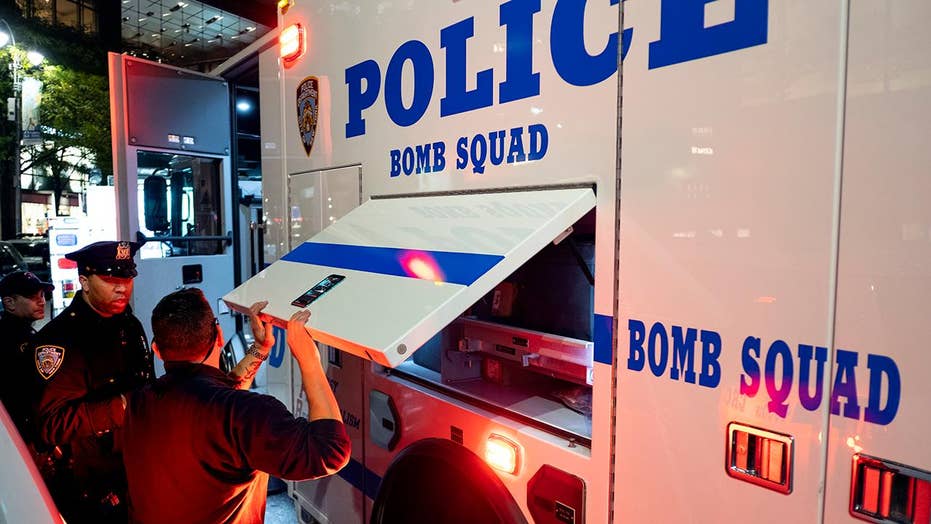 This is a rush transcript from "Special Report with Bret Baier," October 5, 2018. This copy may not be in its final form and may be updated.

PRESIDENT DONALD TRUMP: I am pleased to inform that you law enforcement has apprehended the suspect and taken him into custody.

ATTORNEY GENERAL JEFF SESSIONS.: We will brings the full force of law against anyone who attempts to use threats, intimidation, and outright violence to further an agenda.

FBI DIRECTOR CHRISTOPHER WRAY,: Though we are still analyzing the devices in our laboratory, these are not hoax devices. This is very much an active and ongoing investigation. We do believe that we have caught the right guy. Today's arrest doesn't mean we're all out of the woods. There may be other packages in transit now.

BRET BAIER, ANCHOR: The FBI says they have their man, making an arrest today, Cesar Sayoc in Florida. He is being described as a former male stripper. Acquaintances and relatives are telling reporters he used steroids for years. He has a long rap sheet in Florida. In 2002 he was sentenced to one-year probation for making a bomb threat in Miami-Dade County. Charged with third degree grand theft, battery, petty larceny. In 2004 charged but never prosecuted for possession of a controlled substance. And then fraudulent refunds and tampering with physical evidence.

The van that he lived in, we're told, was taken away, and we saw that live on TV. And you can see the van with the stickers, a lot of political stickers supporting President Trump, Vice President Pence. There are other stickers on there, "CNN Sucks," and also targeted -- pictures with a target over Hillary Clinton's face and others. The president was asked about that as he left for Charlotte a short time ago.

TRUMP: I did not see my face on the van. I don't know. I heard he was a person that preferred me over others, but I did not see that. There is no blame. There is no anything. If you look at what happened to Steve Scalise, that was from a supporter of a different party.

I think I have been toned down, you want to know the truth. I could really tone it up because, as you know, the media has been extremely unfair to me and to the Republican Party. With all of that being said, we are winning, so I like that.

BAIER: So what about all of this and the developments? Let's bring in our panel: Byron York, chief political correspondent for The Washington Examiner; Mollie Hemingway, senior editor at The Federalist, and Charles Lane, opinion writer for The Washington Post. Byron?

BRYON YORK, THE WASHINGTON EXAMINER: Well, we now know who the suspect is. He's a strange, unbalanced man, long criminal record, as you said, who adopted the most extreme displays of Trump support. You can see those. I covered a lot of Trump rallies in the campaign. There are some of those people at each rally. Most of them, of course, entirely harmless.

But there's no doubt that there is politics in this because not only did he target a number of Democrats or pro-Democratic figures, but that the ones targeted were kind of a gallery of Trump villains -- Eric Holder, Hillary Clinton, George Soros, Maxine Waters.

YORK: Exactly, people who had been in highly publicized oppositional arguments with President Trump. So this is going to be a highly politicized argument. But, on the other hand, we don't know a lot now specifically about why he says he did what he did.

BAIER: Let's listen to President Obama a short time ago on the stump talking kind of around this.

FORMER PRESIDENT BARACK OBAMA: What is at stake is a politics that is decent and honest and lawful, and tries to do right by people, and that's worthy of this country we love. It shouldn't be Democratic or Republican, to say you don't punish political opponents or threaten the freedom of the press just because you don't like what they say or write about you.

BAIER: The president has used lines similar to this, but he kind of went down the line of stirring up violence in this speech tonight.

MOLLIE HEMINGWAY, THE FEDERALIST: I'm not sure exactly which.

HEMINGWAY: President Obama was saying that. Well, I think it is something we have seen in recent weeks where there have been these acts taking place from individuals that are threatening, whether it was the Ricin attacks, sending that to General Mattis and President Trump, or there was a bomb plot that was diverted that involved Paul Ryan, I think it was just this week. This attack of sending bombs to Democrats. And I think that's very concerning that when individuals do this.

It's also disconcerting that we are seeing larger public embrace of violence or violent rhetoric or incivility. You know, you had Antifa taking over police functions in Portland. You have had some leaders of the Democratic Party call for physical confrontation and incivility. And it's much more worrisome. You're always going to have people on the left or on the right who behave this way, individuals who acting alone. I think the country needs to, of course, be vigilant against that, and it's wonderful that the FBI did such a good job with the other law enforcement agencies, but much more disconcerting would be the normalization of political incivility.

BAIER: We can come to that conclusion, I think, fairly, that our discourse is a mess. Both parties are to blame. Obviously, the president has the biggest megaphone day-to-day, and we cover it. He took offense, clearly, that some of the coverage of this leading up to this arrest was pointing directly at him for a day, and tweeted out overnight that Republicans are doing so well in early voting at the polls, and now -- he first tweeted out about CNN, they're doing so well at the early voting at the polls, "Now this "Bomb" stuff happens and the momentum greatly slows. News, not talking politics, very unfortunate what is going on. Republicans go out and vote." He was frustrated by it, which was attacked all over the place.

CHARLES LANE, THE WASHINGTON POST: I guess it isn't fair in some cosmic sense that the president isn't allowed by some people in their minds to be as mean to the press or his other critics as they are to him. But, you know what, it's the reality, and it's always been a part of the role of president that your job is not to, as the president likes to say, when somebody hits you hit back twice as hard. Rather, the president's role, at least historically, has been to pour oil on troubled waters in this society, to use soothing rhetoric in times of conflict, to try to soften the political divisions all around us.

And, so, he says people scream at him that he is being unpresidential. I think he is being unpresidential. And it's just never going to happen. I think we have seen enough evidence that President Trump just doesn't sort of have it within him to take a moment of extreme tension and calm it. He tends to raise the tensions. And it's getting to the point where -- and in no way, shape, or form am I explaining him for this specific act of violence.

BAIER: But some did over the past day and a half. And you know that.

LANE: But what I do think is fair is to look at that White House and say, what has it been doing in the last 18 months? Has it been exacerbating political conflict and/or exploiting it, or has it been consciously trying to sooth it? And I think the answer is pretty clear.

HEMINGWAY: I think it's absolutely true that everyone needs to improve the rhetoric from President Trump on down. He is known for insulting people and his negative discussion of the press.

What's unfortunate is the media are very poorly situated right now to talk about improved discourse. They spent much of the last two years opening talking about -- having people on air who talk about him as a traitor who should be impeached. The punishment for treason is actually capital punishment, or that's one of the things can you do. This is incredibly uncivil rhetoric and it's been going on near daily for a year and a half.

YORK: There is an atmosphere now, and it's not attributable to any one person, but do you have an atmosphere in which these bombs can happen, in which the Republican baseball shooting can happen, in which five policemen are murdered in Dallas during the campaign. These things are happening, and we're in one of these periods. And you think back maybe to 1968 in which there were people who worried that the whole country was going to fly off the axle. And we are in one of these periods right now. And I don't think you can attribute -- certainly Donald Trump is doing his part. But I don't think you can attribute the whole or even the greatest part to one single person.

BAIER: One thing we can all agree on is that law enforcement deserves a lot of praise for getting this guy in the short time that they did. Quickly?

LANE: Well, I was just going to say he was mailing out envelopes full of evidence, and they exploited every scrap that was in there.