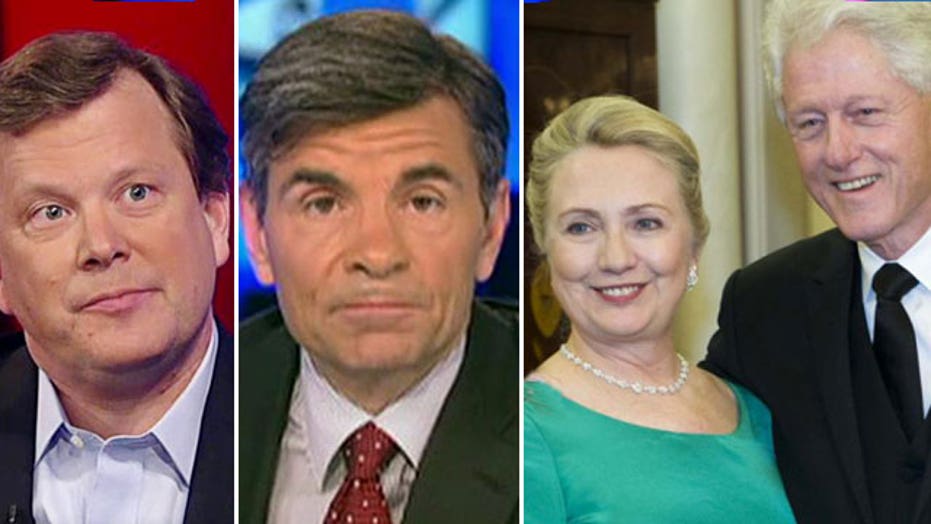 Peter Schweizer on Stephanopoulos' deep ties to the Clintons

This is a rush transcript from "Hannity," May 19, 2015. This copy may not be in its final form and may be updated.

GEORGE STEPHANOPOULOS, ABC NEWS: Now I want to address some news you may have seen about me. Over the last several years, I've made substantial donations to dozens of charities, including the Clinton Global Foundation.  Those donations were a matter of public record, but I should have made additional disclosures on air when we covered the foundation.

And I now believe that directing personal donations to that foundation was a mistake. Even though I made them strictly to support work done to stop the spread of AIDS, help children and protect the environment in poor countries, I should have gone the extra mile to avoid even the appearance of a conflict. I apologize to all of you for failing to do that.

SEAN HANNITY, HOST: That was the greatest humanitarian in the history of mankind, ABC News chief anchor George Stephanopoulos, apologizing yet again for not disclosing that he donated tens of thousands of dollars to the Clinton Foundation.

Now, in a recent op-ed, Peter Schweizer revealed that Stephanopoulos and his ties to Bill and Hillary go much deeper than that. Here in studio to explain much more, author of "Clinton Cash," Peter Schweizer.  Congratulations.

HANNITY: Now a huge New York Times bestseller. I'm not surprised.  All right, so I have your article. I read it this weekend, and it appeared in today's edition of USA Today. It's interesting, the term that you use.  You said "hidden brand journalism." Explain what you mean by that.

SCHWEIZER: Well, I mean, he certainly knew that he had donated to the Clinton Foundation, and he also knew that, as I lay out in the article, he had participated in all these events. I mean, we're not just talking about George Stephanopoulos's time -- his money. We're also talking about his time.

HANNITY: I want to get to that, but here's -- and he did harp on the fact that you were a George Bush speech writer for what, all of three or four months?

HANNITY: Yes. So he wanted to highlight your...

HANNITY: ... conflict to discredit you.

HANNITY: Did you get the feeling that there was collusion, coordination with the Clinton campaign?

SCHWEIZER: Well, I will say this. Somebody did tell me that would have reason to know that he went through the book in great detail and made lots of notes. So he spent a lot of time going through this book. I don't know if he had collaboration, but this was something that he was very, very focused on.

HANNITY: But he didn't ask you about...

SCHWEIZER: This is not.

HANNITY: ... involved in the book, he just wanted -- he said in that interview with you that, Our own ABC investigation.

HANNITY: Who? Who investigated? Was this a call by him to Hillary and said, Hillary, I know this book is awful, horrible. It's -- right, it's horrible? Yes, horrible. OK. Click.

HANNITY: Was that the investigation?

SCHWEIZER: Well, it could have been because, you know, the only people at ABC News looked at this was the investigative unit, and they've run several articles talking about the troubling patterns that the book pointed out, that there was flow of money between...

HANNITY: So wait a minute! So that statement's not true!

HANNITY: ABC did not find your book...

HANNITY: So that was his statement based on, I guess, his investigation, but he used the ABC brand to hide behind.

HANNITY: Well, that's interesting because there's a story in The New York Post today that there's fury and there's a lot going on, a much bigger crisis than ABC will admit, that internally, they're having problems. Have you heard anything?

SCHWEIZER: I have not heard anything directly, but it wouldn't surprise me. I mean, I've worked with some of the people in the investigative unit at ABC News, like The New York Times and The Washington Post, and you know, they're -- they try to be straight news people. And I think it's got to be frustrating when you have somebody that's got this political past that it's not actually their political past now, it's their present.

HANNITY: And he was deeply rooted and involved in the very foundation that you had investigated.

Now, he didn't talk about that.

SCHWEIZER: No, he didn't. He didn't apologize for that. And I mean, this is the problem. I mean, as you know, Sean, we've talked about...

HANNITY: He's up to his eyeballs in this whole -- in this -- in this charity!

SCHWEIZER: And yet that's the subject of my book, but he didn't feel the need to disclose that.

HANNITY: Let me show him on "The Daily Show" because he makes a definitive statement here that I think is interesting. He's on with Jon Stewart. Let's watch this.

STEPHANOPOULOS: I read the book that this is based on, "Clinton Cash." Read it, and I actually interviewed the author on Sunday. This is a tough one because when you actually look at -- look closely at it, he even says there's no evidence of any direct action taken on behalf of the donors.

HANNITY: Did you -- do you -- did you say there's no direct evidence?

SCHWEIZER: No. No. What I said is that there's a pattern of behavior. What's so funny about this is he, in that interview, tried to say, Do you have a smoking gun that a crime was committed? I'm an author.  I mean, that's not the threshold for reporting (INAUDIBLE)

HANNITY: But it's interesting because both The New York Times, Washington Post, and other news outlets...

HANNITY: ... and they made a stinging rebuke, I would argue. You had Pulitzer Prize winners over at The New York Times that I thought took him down, took this initiative down. And that was their reporting based on your book, right?

SCHWEIZER: Right. Exactly. That's exactly right. So it's mystifying to me. I mean, now that we know what we know about his ties to the Clinton Foundation -- Sean, when I went on and did this interview, I kind of assumed that the Clinton thing was in the past. I kind of assumed that, you know, he had left them and he'd written a book and there was kind of a falling out. I had no idea that he was this deeply immersed in the Clinton Foundation. It stunned me. It stunned me.

HANNITY: Fellow mainstream media journalists Carole Simpson and Jeff Greenfield had comments about this. I want you to respond to this.

CAROLE SIMPSON, FMR. ABC NEWS ANCHOR: I like George. I worked with him, and have great respect for him. But I wanted to just take him by the neck and say, George, what were you thinking? And clearly, he was not thinking. I thought it was outrageous.

JEFF GREENFIELD, DAILYBEAST COLUMNIST: I call this a self-inflicted wound. ABC has said now George Stephanopoulos can't moderate a Republican debate. Well, what else are they going to say he's not going to be able to do?

HANNITY: By the way, he said he was recusing himself. Reince Priebus said they already said he can't do a debate! He gave up nothing.

SCHWEIZER: Yes. No, that's exactly right. And I mean, the other thing that Carole Simpson said in that interview is that she didn't really consider George Stephanopoulos a journalist, per se.

SCHWEIZER: Which I thought was, you know, coming from her...

HANNITY: All right, let me go -- let me take you back in time to when he was with the Clintons and they produced this little movie. It was called "The War Room" because I want to ask you two questions out of this.  Do you think he ever changed, number one? And number two, what ABC -- you would like them to do. But this is George when he worked for Clinton on his campaign back in '92.

UNIDENTIFIED MALE: Now, Governor Clinton has a character problem, but I take it that your line of...

UNIDENTIFIED MALE: Your line of counterattack is that it's un...

Bill Clinton's passed his character test throughout his life and throughout this campaign.

UNIDENTIFIED FEMALE: And you're convinced it won't work again?

It is completely (EXPLETIVE DELETED). If you went on the radio and said that Bill Clinton is the father of an illegitimate black child, you would be laughed at. People would think you're crazy. I guarantee you that if you do this, you'll never work in Democratic politics again.

I'm very proud to have done this. I'm as happy as I can be and I'm so proud. We won Nevada big. Governor, we're going to -- I mean, it's looking like close to 400. You ought to be the happiest man in the world.  And I just got to tell you, I mean, I just appreciate this so much. This was the best thing I ever did.

SCHWEIZER: I thought he had changed. But I have to say -- look, I got tough questioning from other people, you know, also on "Fox News Sunday," and I don't mind that. But the interview with Stephanopoulos, the focus was really on trying to get his points across, not...

HANNITY: What should happen to him? Because this involves you and I think you probably, you know, have more right to an opinion, if you will, than the rest of us. What would you like to see happen?

HANNITY: ... because this is more connected to politics. Brian was just trying to build himself up a little bit.

SCHWEIZER: Exactly. And this was actually the heart of the reporting. That was more Brian Williams going on late night talk shows.  This goes to the heart and the essence of journalism. So I think if you look what happened to Brian Williams, I think this is far more severe.

HANNITY: All right, Peter Schweizer, congratulations on the book's success. And I'm sure there's a lot more to come, and Hillary has a lot of questions to answer.