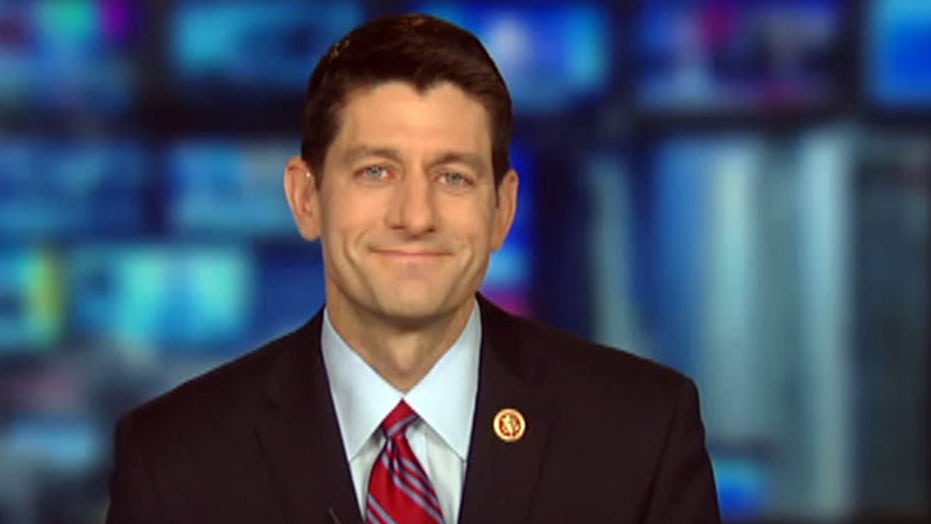 Paul Ryan: Budget agreement is a step in the right direction

This is a rush transcript from "Hannity," December 11, 2013. This copy may not be in its final form and may be updated.

SEAN HANNITY, HOST: This is a Fox News alert. In less than 24 hours, lawmakers in the House of Representatives are expected to vote on a tentative budget deal that was reached late last night. However, today, many conservatives have expressed serious reservations about this agreement. Now, in just a moment, I'll be joined by the man who unveiled the proposal yesterday, Republican Congressman Paul Ryan.

But first, earlier today, House Speaker John Boehner was asked at a press conference about the conservatives who have spoken out against the deal. And this was his, well, reaction.

REP. JOHN BOEHNER, R-OHIO, SPEAKER OF THE HOUSE: They're using our members and they're using the American people for their own goals. This is ridiculous! Listen, if you're for more deficit reduction, you're for this agreement.

HANNITY: Now, the speaker may feel that way, but there are many on the right, conservatives, who are not happy with the so-called compromise. Tonight, by the way, we want you to join the conversation. Log onto our Facebook page. Tell us how you would cast your vote tomorrow. And you can also sound off on Twitter using the hashtag #Hannity over the course of the next hour.

In the meantime, here to address conservative critics and more directly is the chairman of the House Budget Committee, Congressman Paul Ryan. Congressman, good to see you. How are you?

HANNITY: There's a lot of conservative opposition. Before we get to that, let's talk specifically about the deal. And I think a lot of the anger is rooted in the -- kind of the end in sequestration. That was working. But why don't you outline it yourself. You worked on it with Senator Murray. Tell us what it is.

So what we're saying is instead of the across-the-board cuts, which hit only the military starting in January, which is a concern of ours, we cut spending in other parts of government to pay for that. And we cut -- we get $85 billion in savings from the autopilot side of government spending to pay for $63 billion in sequester relief. That gives us $23 billion of net deficit reduction.

So when I went into this, Sean, I had a couple of bottom lines -- keep our principles intact -- that means no tax increases, cut spending in smarter ways so that we actually reduce the deficit. We think we kept those principles intact. That's what this agreement does. Doesn't get rid of the sequester. It actually -- the Democrats went into this saying no sequester at all. Now they've agreed to keeping 70 percent of the sequester during this time. And over the life of the sequester, we keep 92 percent of it. So we see that as a -- we see that as a really good step in the right direction.

HANNITY: All right, the budget deal, though, would spend $63 billion over the next two years. The savings come at the back end of the 10-year period. And you and I both know that future Congresses are not going to be beholden to this deal and it's probably going to change many times in between. Isn't that the way -- and this is a big criticism of Washington in general.

HANNITY: You get tax increases now, you get this now, and all the good stuff will come later.

RYAN: Yes. Well, obviously, there's no tax increases here, but I understand your point. This is the nature of what we call mandatory spending or entitlement spending or autopilot spending. When you change the law, which we're changing the law immediately, that accrues savings over time. And that does take time to accumulate that savings. It's not backloaded, it just compounds.

Take, for example, federal employees. We're suggesting that the hard- working taxpayers who pay the taxes to pay for government workers' benefits don't pay as much for their benefits and the worker pays more for their own benefits.

HANNITY: Isn't the net, though, $23 billion in savings over a long period of time, and that the budget deficit, which now stands...

RYAN: Sean, let me just make the last point, which is permanent law changes, permanent spending cuts -- they take time to develop, but they -- they're not -- if they're going to be undone, Congress has to pass a new law to undo them.

To your point, you're right on the money. This is not an agreement to balance the budget. That's what our budget does. Guess what, Sean? Elections have consequences. We're going to have to win a couple of elections to actually pass the kind of budgets that you and I are in favor of, the one I passed in the House just last spring.

HANNITY: So this is not your ideal...

RYAN: ... without raising taxes. No, of course not.

RYAN: This isn't even close to my ideal budget. But here's the point, Sean. Is this a step in the right direction or not? This cuts spending, this lowers the deficit, it doesn't raise taxes. And...

RYAN: ... in particular, we're concerned about what it does to defense. It stops those defense cuts from happening any more. So we see it as a step in the right direction.

RYAN: So this prevents those government shutdowns.

HANNITY: It prevents the government shutdown. It's -- it gets you to the next election. And I guess I view where we are right now -- and tell me at which point you disagree. Feel free to interrupt me.

I see America is in a financial crisis that...

HANNITY: ... we are now going to have $25 trillion we're now headed for in debt, all these -- the $90 trillion in unfunded liabilities. We have 25 million more Americans on food stamps, one in six Americans in poverty, one in five American children in poverty, no real solution in sight.

I know that you only have one house, but you also have the power of the purse. Is it -- tell me why it's better to have the status quo and not go to the American people and say, "We're hitting a crisis, we're going to be bankrupt, Medicare's going bankrupt, Social Security's going -- we are on a path that's unsustainable."

The penny plan, any other plan to balance the budget is better. Here's what we should do. Why not take that message to them...

RYAN: ... versus just accept that it can't happen?

RYAN: Sean, I've been doing that for five years.

RYAN: For each of the last five years, I have passed or pushed budgets that do just what you said. Here's the problem, Sean.

RYAN: Here's the problem. Barack Obama is the president of the United States, and Harry Reid is the Senate majority leader.

And so what are we going to do in the meantime? In the meantime, it's three yards in a cloud of dust. In the meantime, we're going to get incremental gains. And we think it's in our interests nationally and also for the year to not have government shutdowns. And here's the precedent that I wanted to set. Every time we've had these budget negotiations, the Democrats say, I need 50 percent tax increases, 50 percent of spending increases. (sic)

HANNITY: But let me ask you this...

HANNITY: ... for a second -- let's assume that the Republicans maintain the House and they get control of the Senate. We're still on a trajectory towards...

RYAN: I think the window of opportunity is closing very quickly.

RYAN: So if we get the Senate, then we'll take that House budget, which balances the budget...

HANNITY: ... for two years, even if you have the House and Senate.

And by the way, every time we do these continuing resolutions, where we give the power to the president to set spending priorities, we're ceding the legislative branch power to the executive branch. This agreement brings that power back. This agreement by writing our appropriation bills says we're not going to give the president a blank check with a continuing resolution. Congress is going to set spending priorities. Congress is going to write the spending bills. That's one of the things we get in this agreement.

RYAN: So look, you and I agree with each other...

HANNITY: I know -- I know where your heart is. I know that we are really coming to a critical point in our history, and that is that this country headed towards bankruptcy. We're robbing our kids and grandkids blind. I know that you don't want to do it, but we're still -- this budget deal still brings us to $25 trillion in debt. That's -- that to me is bringing us to a crisis.

RYAN: ... you're not going to get that. So what we're trying to do is make this divided government work and get the Democrats to drop tax increases and work with us to cut spending, which is what this does do. As small as it is, it's a good precedent. It's a step in the right direction. We're reducing the deficit...

HANNITY: Will it pass?

HANNITY: All right. Congressman, thanks for being with us. Appreciate it.