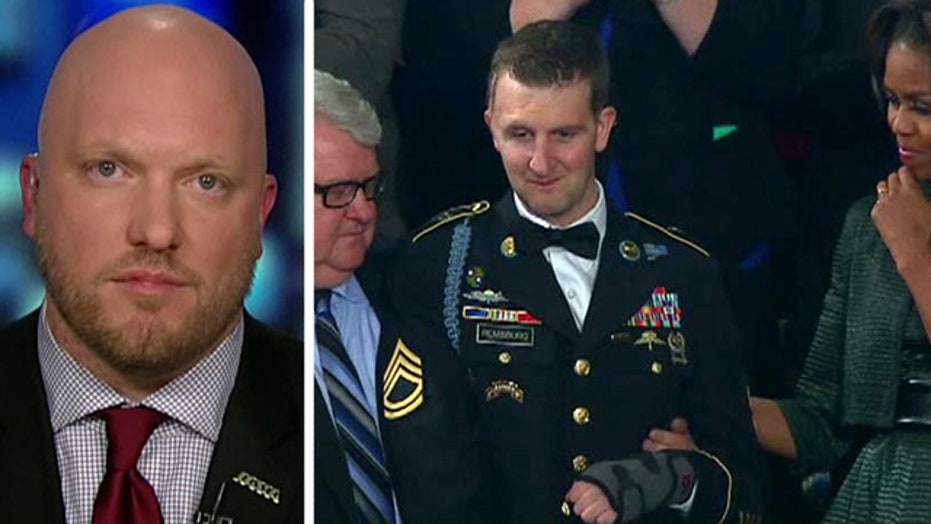 Are the president's promises enough for our nation's heroes?

This is a rush transcript from "The Kelly File," January 28, 2014. This copy may not be in its final form and may be updated.

PRESIDENT BARACK OBAMA: As this time of war draws to a close, a new generation of heroes returns to civilian life. We'll keep slashing that backlog so our veterans receive the benefits they've earned and our wounded warriors receive the health care including the mental health care that they need.

MEGYN KELLY, HOST: Well, military veterans listened closely as President Obama addressed their needs for earned benefits. Among those listening, an Iraq war veteran who says this country needs more than speeches right now. Paul Rieckhoff is the founder of the group Iraq and Afghanistan Veterans of America. Paul, good to see you.

PAUL RIECKHOFF, IRAQ AND AFGHANISTAN VETERANS OF AMERICA: Good to see you, Megyn.

KELLY: So, what did you want to hear, but didn't?

RIECKHOFF: Well, the number one thing that I, V.A. and our national membership wanted to hear is that the president stands with us in opposing retirement cuts. That just went through the budget in a back room deal. You and I have talked about it a few nights ago. That's going to cut the retirement benefits for folks by 20 percent. That means about $80,000 for retiring E7, someone like the vet who was sitting there tonight, at the State of the Union, a lot of vets who were around him. We wanted to hear that the president is going to stand with us, and demand that Congress repeal those cuts. He didn't. And I think that absence and that silence on that issue is very disappointing and outrageous when Congress just did a backroom deal .

KELLY: But just to be clear. Just to be clear. That is not a President Obama issue. That is a Republican and Democrat issue up for those who struck this deal in the Congress and voted for it. Right? I mean, obviously, the president signed on, too, but .

KELLY: What did you think, though, at the end Paul? He had a nice moment with the veterans when he called out Cory Remsburg, an Army ranger who had been injured in Afghanistan and talked about how he said his recovery wasn't easy -- nothing in life has been easy, that's worth it, and he talked about how America's never come easy, but we need to work together.

RIECKHOFF: Yeah, you know, Cory is an example for everybody. And, you know, he's got more honor and integrity than most folks in Congress and I think he should inspire all Americans. It's great to hear that story told and it's great to hear for Americans to understand that veterans like Cory represent a new generation of leader perhaps a next great generation. And we think they are going to be out on front, and maybe they can even help solve Congress, but that is the type of leadership we need in Washington and we need nationwide.

KELLY: And calling attention to the backlog of military benefits, I mean that is something that, you know, has been an outrageous oversight, to put it charitably, in this country in Washington for far too long.

RIECKHOFF: Yeah. 400,000 people are still stuck in the backlog. They've dropped it by about 30 percent, but that basically means they've pulled the car out of a ditch about 30 percent. There is still a long way to go, and 400,000 people are waiting. So, our members want to see that number at zero. And until that number gets to zero, we're not going to be satisfied. And Congress and the president shouldn't be satisfied, either.

KELLY: Paul, great to see you.

RIECKHOFF: You too, Megyn, thank you.

KELLY: Up next, more reaction to the State of the Union. This time, of course, from Meatloaf.