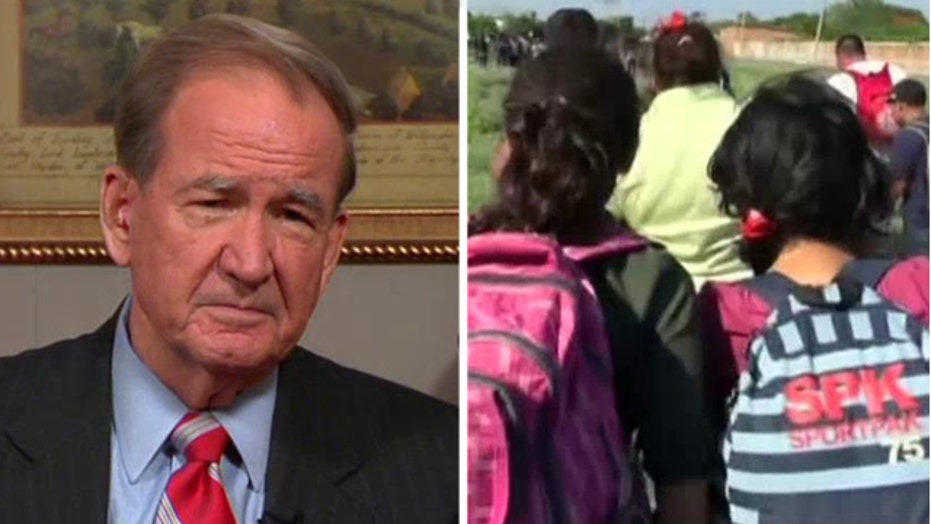 Pat Buchanan sounds off about dangers of immigration crisis

This is a rush transcript from ""Hannity," September 8, 2014. This copy may not be in its final form and may be updated.

SEAN HANNITY, HOST: Welcome back to "Hannity." Now, despite some officials, including the commander-in-chief, insisting that ISIS does not pose a credible threat to our homeland yet, well, others continue to sound the alarm on the radical Islamic group's capabilities.

Now, take a listen to these chilling warnings, and keep in mind that they come just days before the 13th anniversary of the September 11 attacks.

SEN. DIANNE FEINSTEIN, D-CALIF.: ISIS is a major threat to this country in the future and right now to the entirety of Syria and Iraq and the expanding caliphate. I think where they're going is to Baghdad. It is my belief they will try to attack our embassy.

MICHAEL MORRELL, FORMER DEPUTY & ACTING CIA DIRECTOR: There was no credible information on September 10th, 2001, that al Qaeda was going to hit us. The threat from ISIS is exactly what Fran (ph) said it was. It is them directing an American citizen or a Canadian or a West European to come here and conduct a small-scale attack. That could happen tomorrow with or without credible information.

HANNITY: All right, here with reaction is the author of The New York Times best-seller "The Greatest Comeback: How Richard Nixon Rose From Defeat to Create the New Majority," Patrick J. Buchanan. Sir, how are you?

HANNITY: You know, what part of, you know, the president not realizing, if you behead Americans and you're saying, "We'll see you in New York and we're going to raise the flag of Islam in your White House" -- what part of that not being a war does this president not understand? Because that sounds like war to me, that they're at war with us.

BUCHANAN: Well, no doubt when you behead two Americans like that and do it on video and send it to the Americans and taunt them, that is not only an insult to the United States, it's an outrage and an atrocity. And we should really hammer them hard as soon as that happens, Sean, and be severe and extensive in our attacks.

Now, their threat to the United States, however, I think is much more like the Al Qaeda threat. It's a threat of individual acts of terrorism of people that have been over there being moved out and moved over here. So I think there's two different kinds of threats.

HANNITY: You know, Pat, you and I -- we even had, I think, one or two knock-down, drag-out fights over the issue of the Iraq war. But once we were in it, I will say this. You said we got to win the war.

The president -- in a post-Vietnam era -- here's my concern, is that we have now politicized war to the point where we can't win it. And all the president needed to do was keep intelligence on the ground, keep training on the ground for Iraqi forces. And I tell you that Fallujah, Tikrit, Mosul and these other cities wouldn't have fell because we would have seen ISIS coming. We would have been able to stop it. Do you agree with that part?

BUCHANAN: Well, I agreed with the surge. I didn't want to see the United States lost the war in 2006, 2007. I do agree if you had 10,000 Americans in there right now that I think ISIS would not be doing as well in Iraq as it's doing.

I also agree, Sean, that we can use American air power. Where I do disagree is this. I think a lot of these terrorists want Americans to send another big army over there into Syria, into Iraq, where we create as many terrorists as we kill.

Look, there are about a million troops in the Turkish, Syrian, Iraqi and Kurdish armies. They can deal with 20,000 ISIS terrorists on the ground. America should restrict itself to air power.

HANNITY: All right, let me -- let me go to the threat here at home.  Did you see today in the news that Saudi Arabia is actually building a fence on the Iraqi border, a fence that we should be building on our southern border? I have always said, and you've been -- you've been so outspoken on the issue of immigration -- the biggest need to control our borders is the fact that we've got terrorists that could enter this country.

When I was down getting briefed by Rick Perry and a team of border agents down there, they were telling me they're capturing people from Yemen, from Syria, Afghanistan, Pakistan. How important, if we really want to prevent another 9/11, is it that we secure that border and make it a single top priority now?

BUCHANAN: Well, Sean, look, we've seen terrorists come through the Canadian border, which is much more secure. Here we got 2,000 miles of border where people -- 13 million people or something have walked into the United States. Others have come in here and overstayed their visas.

HANNITY: I have no idea.

BUCHANAN: ... ironclad on this issue for 25 years!

HANNITY: Yes, they don't -- their strategy, according to Roll Call today, is play it safe until the elections. I think they ought to be saying, "We're going to control the border. We're going to have the penny plan and stop spending money we don't have. We're going to use energy to jump start the economy..."

HANNITY: They ought to have an inspiring vision.

BUCHANAN: They ought to also hammer the president of the United States, who's going to give an executive amnesty to 7 million people after the election! They ought to...

HANNITY: ... he's delaying it, but he's going to do it. So what's the difference?

BUCHANAN: Well, I think every Democrat should be put on notice to answer whether he supports this unconstitutional, illegal action which usurps the power of the Congress of the United States!

Look, we had a battle in 2007 about amnesty, and it was in the Congress and our side won, Sean. Our side won! Now the president can do it by executive order? I think the Republicans ought to raise the devil about it! And the reason some of them don't is they want it.

HANNITY: But they're not going to do it, Pat, because they're playing it safe. No inspiring vision. They're not nationalizing the elections about the economy, about energy, about securing the borders, about a consensus alternative...

BUCHANAN: Some of them -- some of them want the amnesty to get the issue behind them.

BUCHANAN: A lot of Chamber of Commerce conservatives will say...