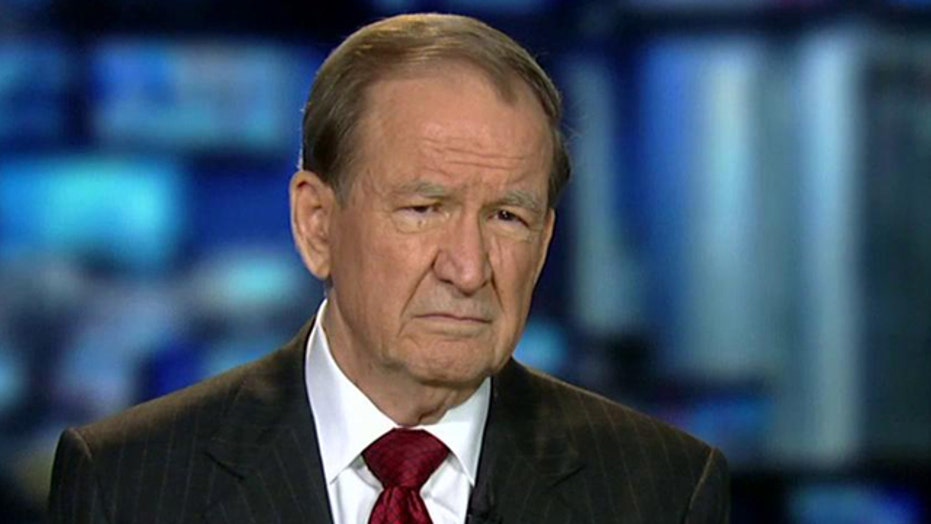 Pat Buchanan on why border crisis may tear the US apart

Former presidential candidate sounds off about the immigration chaos

This is a rush transcript from "Hannity," July 16, 2014. This copy may not be in its final form and may be updated.

SEAN HANNITY, HOST: And for years, my next guest -- he's been warning of the dangers of illegal immigration, but he made waves earlier this week when he said if America continues to allow illegal immigrants to flood across the border, our country faces a, quote, "Balkanization" and risks a, quote, "potential break-up."

Joining me now, author of the brand-new book, a New York Times best-seller, "The Greatest Comeback; How Richard Nixon Rose From Defeat to Create the New Majority," Patrick J. Buchanan is back with us.

Sir, you have spoken for years -- you have warned America for years about illegal immigration. You've even taken a lot of heat and been called a racist for saying that you want our laws obeyed and American sovereignty respected. Is this even worse than you thought it would become?

PAT BUCHANAN, "THE GREATEST COMEBACK" AUTHOR: Yes, Sean, it's -- I've been at this for 20 years since I ran in 1992 against President Bush, when they were coming in at the Imperial Beach out there in San Diego at 5,000 a weekend, walking into our country. For 20 years, the government of the United States has failed to secure the borders of the United States. And a country that cannot control its borders, said Ronald Reagan, isn't really a country anymore.

And we are headed down the road to a point in this country, with people pouring in from every country and continent of the world, many of them coming in here not knowing the language, understanding the language, not being part of our culture or civilization, to the point where I think the United States of America is really down the road going to head for Balkanization and breakup, people moving to enclaves of their own faith, their own language, their own history, their own identity. And I think that's what we're risking. All over the world, countries are breaking up over these issues.

HANNITY: Let me ask you this, Pat. Are you suggesting that maybe secession, maybe a state would say, You know what? We don't want any part of this anymore, America -- you know, look at the last report that we had from Kristin, and she's saying that our government is paying families to house illegal immigrants?

We know we have 11 or 12 million illegals here. It may well be 20.  How did this happen, Sean, to get to these numbers without either the collusion or dereliction of duty in the part of the president of the United States?

HANNITY: Well, but Pat, we already know this!

BUCHANAN: And frankly, not only this president.

HANNITY: We know this president -- in fact, he didn't get his Dream Act passed, so they made a decision not to enforce the immigration law. He made a decision to rewrite the workfare provision and not enforce them on welfare reform. We know that this president has decided to unilaterally change his own legislation, "Obama care." This is not new, Pat. We've been talking about the imperial presidency for a while.

BUCHANAN: We're going to talk about the transformation of America, too. That's what he had in mind, and that's what is happening here. Now, these folks coming into this country are poor. They don't speak the language. They're not well-educated. And they're going to go on welfare rolls and they get social welfare benefits.

And it's not simply a problem of bankrupt the country. Politically, what is this going to mean? Right now, one third of all the illegal aliens go to California, Sean. Take a look at California politically, which Richard Nixon carried five times and Ronald Reagan carried in four landslides.

HANNITY: Well, a diverse society, but you're saying that you think the majority of people that are coming in from these poorer countries are more likely to vote Democrat because they...

HANNITY: Well, let me ask you this. You talk about Balkanization.  What do you foresee happening? How would that happen?

BUCHANAN: I don't see the -- here's what I see. I see -- I mean, there are huge enclaves of people in various cities and towns basically moving together by culture, by language, by ethnicity, and basically not communicating well or hardly at all with other areas of the country.

It's like, you know -- when I say Balkanization, look at Yugoslavia.  It broke up over religion, language, culture and history into seven countries. You got Serbia, Croatia, Bosnia-Herzegovina, Macedonia, Montenegro, Kosovo. And that's what I see happening down the road to the United States.

Sean, it is happening -- look at Britain. The Scots want to get out, and they are similar in many ways to the English.

HANNITY: Do you see certain states...

BUCHANAN: It's happening all over the world!

HANNITY: Do you see certain states saying, we want to be independent, and declaring their independence?

BUCHANAN: No, I don't see another thing like Southern secession.  It's more internal. Look, northern California wants to secede from California. Northern Colorado wants to secede. Maryland wants to secede because politically, and every other way, they look at Annapolis, say, in Maryland, say, we don't want part of that.

BUCHANAN: We can't get anything out of there. They're not like us.  I see that as the future of the country.

HANNITY: All right, Patrick J. Buchanan, thanks for being with us.  Appreciate it. Congrats on your book.