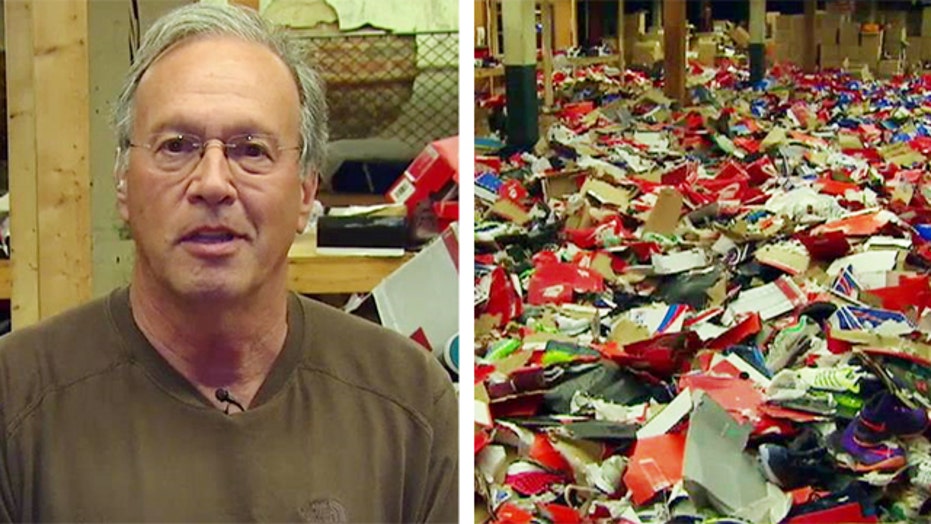 Owner of looted Baltimore shoe store on handling of crisis

This is a rush transcript from "Your World," April 29, 2015. This copy may not be in its final form and may be updated.

NEIL CAVUTO, HOST: Meanwhile, this is what was happening to my next guest's shoe store on Monday night, looters running in and out and grabbing as much as they could. This is what his store looks like right now.

To Sportsmart owner Harvey Levy on what he makes of the mayor's alleged comments right now.

What do you think of that, Harvey, what she's saying essentially or what she's alleged to have said, is that it's only property?

HARVEY LEVY, OWNER, SPORTSMART: Well, I think that the mayor had a tough decision to make in lieu of the Gray trial, and in lieu of the problems that they have had in the past, the violence in the city.

I think she was between a rock and a hard place. She -- I think she did the best she could, except I was a little disappointed that they didn't activate the National Guard the day before doing -- due to the violent nature of Baltimore's history. And with the Gray trial, I think that they could have been at least put on alert on Sunday, and they could have hit the streets a lot sooner than they did.

I didn't see any National Guard here until late Monday night. And by that time, my store was pretty much empty.

CAVUTO: What did they do? I mean, explain what happened, what you saw, what went down.

LEVY: Well, I was home at about 9:00 and I got that call that every businessman hates. Puts an empty feeling in your gut, that your store alarms had gone off, and they called.

And I went right to my Webcam phone. And we have eight cameras here, and all my lights were on in the store, and I saw people running in the front door and running out with boxes and looting my store. I, you know, thought the police were on the east side of town, and all the police and everyone was on the west side of town, and I think it was a crime of opportunity here.

And it's -- it was gut-wrenching to watch our business dissolve like that. And I finally called -- they were doing a live interview in front of Central Police Station, and she -- and the anchor had several policemen behind her. And I actually called the station and said, if you can get a message to your on -- live personality, if she could turn around and please tell one of the police officers that they're taking about a million dollars' worth of merchandise out of my store three blocks behind them.

LEVY: And I still got no response. There were no -- the policeman finally called me about an hour later. And he was in my store. All the looters had gone, and he was sitting at the counter and I saw him on the video cam. So, I called the store and he answered and he said he was a policeman.

And I said, well, do me a favor and see -- you know, lock the back door, because I could see they were still looting in the back door. This is a big warehouse. And he was in the front and he was sitting there and he said he has to leave, to please come down. I said, I'm not coming down there. And he said, well, we have to leave.

And 15 minutes later, I logged back on and he was gone and there was probably 150 people rampaging my store. And they worked their way through to open the back door and they had probably 200 people coming in my back door, and they were making trips in and out.

CAVUTO: How long was the process? Because when I was looking at some of it before, they did not appear to be in any particular rush to get out in case the cops would show up. How long were they there before they emptied you out? Because I understand they were dragging a safe out of there as well.

LEVY: Well, we have a 2,500-pound safe that they -- they put it on a hand truck, which was destroyed, and I don't know how many people took it, but they took the safe, and when we came in at 7:00 the next morning, the safe was sitting about half-a-block away in the middle of a street. They still couldn't get into it.

The police -- I was watching my video until maybe 5:00, 5:15 on Tuesday morning and there were still people in the store looting the store.

CAVUTO: All right, so, bottom line, Harvey, you're wiped out. I mean, a dozen workers there, their future in doubt. What are you going to do?

CAVUTO: So, you have no compunction about opening back up? You still want to stay in that area, you still believe in that area?

LEVY: Oh, yes. You know, probably 98 percent of our customers are people that are third-generation that have been coming to our store for years and years and years.

And, you know, they're very nice people, although it was a little disconcerting when you can see the faces of the looters. A lot of them looked familiar, people that I know have shopped in the store.

CAVUTO: Is that right?

LEVY: That's going to be difficult when we open back up.

LEVY: It's going to be a little tough to do business and see people come in that we might have recognized on the video.

And the video, I have five-and-a-half, six hours of eight cameras watching maybe 300, 400 people come through our store.

Harvey, I'm very sorry. But, you know, you sound like a very resilient fellow. Good luck reopening. Good luck getting back on your feet. Incredible.

CAVUTO: I appreciate it very much, Neil.