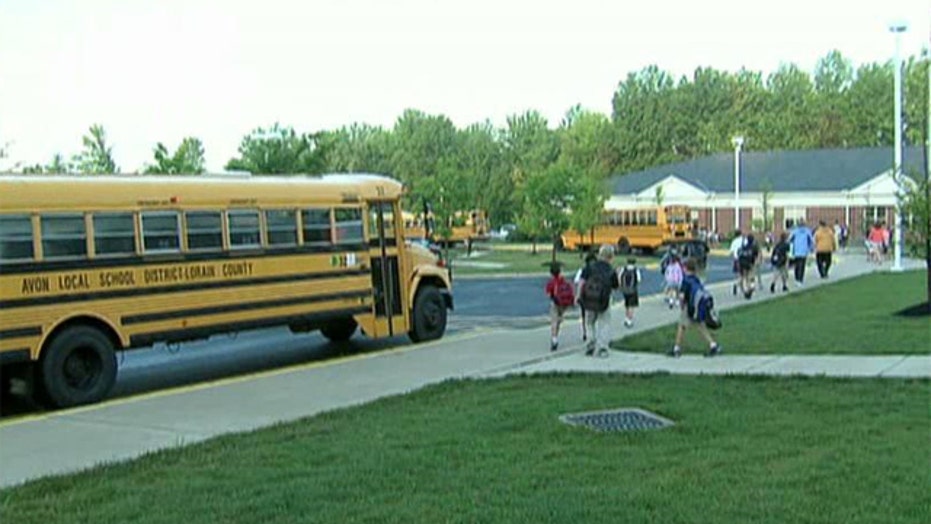 Back to school bummer?

JOHN LAYFIELD: This is politicians' way of buying votes and not dealing with real problems. We have 46.9 million Americans that are on food stamps right now. One out of every six Americans is also living in poverty. If we want to fix food stamp use, we have to fix poverty. We have politicians that aren't doing anything to fix the underlying problem, which are jobs and the economy. We simply give people food stamps and welfare, spending $1 trillion a year on these programs just to buy votes.

JEHMU GREENE: This is about making sure that the recovery doesn't continue to be as tepid as it has been. I had the very personal experience as a young child of standing in a line waiting for government cheese. People who are on food stamps feel that it is demonizing. They do not want to be in that line. They do not want to be working a full-time job and still living in poverty. What needs to happen? We do need to increase the minimum wage. We should not have a person who is working full-time, receiving the minimum wage, still have his family in poverty, and have to listen to a child say "mama, I'm hungry." So it is not about throwing these programs more money. This is a social safety net. It's a safety net for when we went into the recession and that's why the numbers are so high. But the solution isn't to just slash that money and remove that safety net as folks are still struggling in this tepid economy.

TRACY BYRNES: There was a time when it was embarrassing. My family immigrated; they would never in a million years take a government handout. Things have changed, since Jehmu was a kid. The mentality is now, "Hey, my neighbor's getting a check, I want one too. How come I didn't get first-time home buyers check? Everyone else got something I didn't." Now we're starting to feel like, "Hey, where's my cut?" And that's a bad, bad place for our country to be in.

GARY B. SMITH: I think when you give people something for free, they're apt to do what most of us would do and that's become lazy. I'm not saying that everyone getting the food stamps is lazy. Study after study has shown that when you increase unemployment benefits, the length of time a person stays unemployed is longer. So there's a very direct correlation between increasing this "free money" and a time a person sits back, and I hate to say it, becomes lazy. I'm not saying there's a certain percentage of people out there who don't really desperately need it or in the case that Jehmu points out, they are desperate for food stamps. But there's a big gap between that and the people who just sit back and are taking it as evidenced by all of the fraud and things we see in welfare, Medicare, and even food stamps.

JONAS MAX FERRIS: The 74 percent people of the survey are right, but 75 percent of the country is dependent on government. If you broaden the definition of dependent, it's paying less in than you're getting from the government. Most people don't pay in enough. They take out more than they pay in taxes. Most Americans pay a single digit tax rate. They're going to get benefits far in excess of that. Doesn't mean they're all getting food stamps or unemployment insurance. But this government writes more checks to the oldest 20 percent than the poorest 20 percent. Let's not say the whole problem is food stamps. The problem is people who shouldn't be on that but people are not paying enough and they're taking in more through home credits or mortgage deductions, going down the line. Only the top tier of this country is paying more than they're getting out of this federal government.

GARY B. SMITH: The parents are undergoing a stick-up, if you will. It's all due to the fact that American public education is so incredibly inefficient, it's jaw-dropping. We now spend double per student, over $13,000 per student than we did back in 1975. Second, here in the DC. Area where I live, the average spent per student in public schools is $28,000. You know with $28,000; you can go to National Cathedral, Georgetown, any of the great private schools. Now, the parents in D.C. public schools think their kids are getting as good an education as they do at National Cathedral, I don't think so. American education and public education need to be reformed.

TRACY BYRNES: At the same time, as much as I complain about it, and I do, I would rather the money go to the curriculum. Some school systems are so poorly run. But I would rather pay to put my kid on the sports team and know that the money is going at least towards the education process.

JEHMU GREENE: School funding is absolutely getting cut. I think it's outrageous that parents should be paying these fees. When I was in elementary school, my parents couldn't afford the $3 fee for the musical class that I was taking to buy a recorder. I can't imagine these hundreds of dollars of fees. But privatizing education is not the answer. Children are getting private school vouchers and they're leaving those schools, the schools are then losing that money and that is why these fees are going in. So you have to have an all of the above approach where there are charter schools but still public education is not de-funded. We have Republicans who just passed a bill in the house that would make it easier for school districts to slash their budgets. That's wrong.

JONAS MAX FERRIS: I like the idea. I don't like the implementation. There are some poor kids that can't do the activities. That's unfair and against the scope of public education. You're not supposed to be able to buy more benefits. However, you can't keep dumping your neighbor with a higher property tax bill to pay the skyrocketing costs. This issue is paying for those costs and parents who can afford it should have to pay a pupil tax, let's say, you've got five kids in school and, let's say, you're a renter and you're not paying property tax, but poor kids who can't afford these fees should not get burdened with them. That's against the scope of it. It's not private school and on the private school note. Private kids don't have to pay for the special education and special needs kids.

JOHN LAYFIELD: I think this is not a partisan issue. Every president says they're an education president. Our system has continually deteriorated despite bright spots. My sister's a great teacher; there are great schools out there. I run a program that helps with at risk kids. We are privately funded. We help minority kids get through school. Very few of our kids could afford to be in our program. That's why we're privately funded. In inner cities, we have 50 percent of minorities dropping out of school. This is a problem on society. And that's where you have to have the government step in. You cannot cut funding to these schools. We've got to do something with this horrible education system and these horrible teachers that we have that need to be fired.

PRESIDENT CALLS FOR $15B HOUSING STIMULUS

TRACY BYRNES: These people don't learn, do they? Get out of housing, get out of everything. None of the housing projects that came out of D.C. have worked. If this was such a great idea, some private equity firm or a bunch of entrepreneurs would come in and do it themselves. Let the capital markets do this, not the government.

JEHMU GREENE: There are five states that right now hold 33 percent of the total negative equity. If we do not focus on these hardest hit communities, we are not going to see home sales rebound, and prices are going to continue to be driven down in these hardest hit communities. We have to intervene. This is also the textbook definition of a win/win/win. You can put people back to work, construction workers will help lift up these communities.

GARY B. SMITH: Why is the government meddling in housing? They're trying to predict supply and demand. They're trying to prop up home prices. Why is that the government's job? Look, if that vacant land or the rundown houses were of any value, someone would swoop in and build something there. We've had vacant land in this country before; it was called the 1700s and 1800s. No one said the government had to go into Oklahoma to clear away the shrubs to people could build houses; they just went there because it was cheap. Land in Detroit right now is cheap. You can buy a house there if you want, but no one wants to right now. All right, so go elsewhere.

JONAS MAX FERRIS: I thought that was how we developed Alaska, incentivizing people out there. The government has had a role of developing this country. The private sector is strong enough now to handle the for profit housing market. There is a way to make money from a lot. There are all of these funds that are buying dilapidated properties. However, when you have a situation that's uneconomic where there is no free market solution, that's when it becomes the role of government. When you've got a house that's dilapidated, it's not going to go away if it's worth nothing like in Detroit. Otherwise it's like a manmade disaster like a dust bowl. We have to fix up our own mistakes we made.