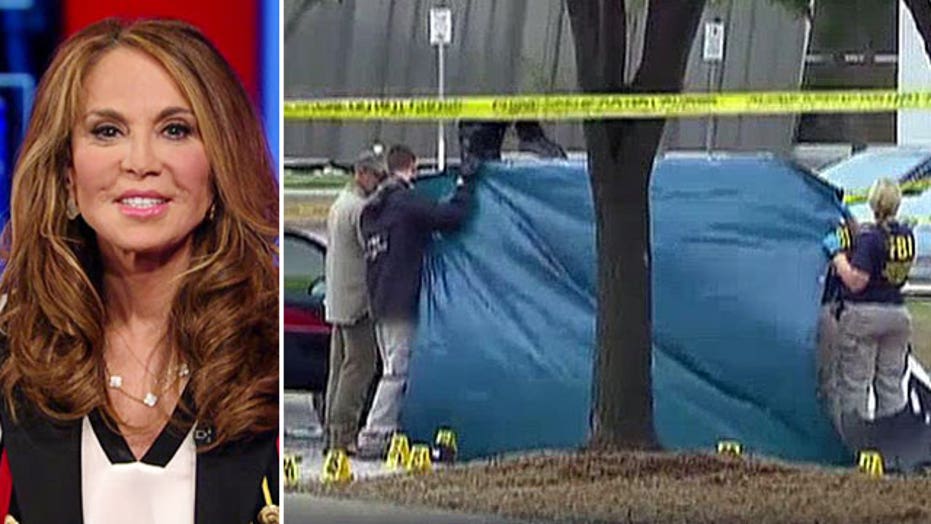 Organizer of Muhammad exhibit in Texas speaks out

This is a rush transcript from "Hannity," May 4, 2015. This copy may not be in its final form and may be updated.

SEAN HANNITY, HOST: An investigation is under way tonight into the backgrounds of two gunmen who launched an attack on a free speech event in Texas where cartoons of the Prophet Muhammad were being displayed.

Joining us from the scene tonight is our own Jonathan Hunt.  Jonathan, what do you got?

JONATHAN HUNT, FOX NEWS CORRESPONDENT: Sean, the investigators have finally wrapped up here at the initial crime scene having spent all day painstakingly sifting through the evidence, the shell casings and other evidence inside and outside the car in which the two shooters arrived.  They arrived, of course, armed with assault rifles and wearing body armor, but they were ultimately no match for one traffic cop armed with a pistol and the SWAT team members who then came to his aid.

Officials named the shooters as Elton Simpson and Nadir Soofi who apparently shared an apartment some 1,000 miles away in Phoenix, Arizona.  That apartment and two vehicles there have been the subject of a day-long search by FBI and local police who apparently removed several items of potential evidence. Now, Simpson was known to the FBI and was apparently convicted in 2011 of lying to federal agents about plans to travel to Somalia.

Now, as you know, the shooters appeared to have targeted this event because it was a contest for the best cartoon depicting the prophet Muhammad. Now, depicting the prophet in any way is blasphemy in the Islamic religion. The White House press secretary Josh Ernest said today the president believes that any act of expression, as he put it, even if it offends some people is not a justification for violence. Sean?

HANNITY: All right, Jonathan, thank you.

Here with reaction is the organizer of that event, Pamela Geller, and Breitbart Texas managing editor Brandon Darby, who was there covering the event.

Let me go to -- Chris Matthews, I mean, this is the mindset of the media. I'm not sure what part of the First Amendment freedom of speech they don't understand, but he's saying, well, does in some way these events, well, not the word causing, does it cause these events or provoke or taunt or daring? And then the so-called Muslim expert says, well, you know, when you provoke people and incite people, it doesn't make the violence right, but don't be surprised if it happens. So you can't draw a cartoon of the Prophet Muhammad without expecting this violence? Is this how far we have sunk that we've got to capitulate in this way?

PAMELA GELLER, AUTHOR AND COLUMNIST: Yes. That's how far the left has sunk. The idea is that in this country, country of freedom of speech, that they will not analyze, look at, or even discuss the ideology behind the slaughter, the wholesale slaughter of those that will criticize, mock, or insult Islam, speaks volumes.

HANNITY: But you were steadfast in saying you speak out against radical Islamists that are persecuting Christians, persecuting Jews, threatening to wipe Israel off the map, and you're standing up for the idea --

GELLER: Of freedom of speech. Look, this -- this event -- how did this event come about? Back after the Charlie Hebdo murders, you remember the jihad murders.

HANNITY: Sure, of course.

GELLER: These cartoonists were slain over a cartoon. Think about that. I will hold a thousand exhibits to stand in solidarity with the Charlie Hebdo editorial staff. In the wake of that jihad slaughter a number of Muslim groups held a stand with the prophet conference supporting the sharia restrictions against free speech, supporting the ideology behind the Hebdo jihadists.

HANNITY: Am I interpreting wrong? I interpret your event as you are not going to be dictated to what you can and cannot say, what you're not going to allow after the Danish cartoon incident, Charlie Hebdo incident, you're saying, no, this is America.

HANNITY: And we are not going to give into this political correctness or this demand that we can't draw a cartoon?

GELLER: Bingo. We are not going to abridge our freedom so as not to offend savages.

HANNITY: Why is a cartoon -- let me go to Brandon Darby who is covering the event. Why don't you tell us from your perspective how you perceive the events and what you saw go down?

BRANDON DARBY, MANAGING DIRECTOR, BREITBART TEXAS: Sean, thanks for having me on. My entire team, three of my team members were in the event. I covered the outside. I decided to cover the protests outside. But it was very strange because there were actually no protests outside. And, thankfully, I got in the car and began to drive around to look for protests, and that's why I wasn't right in the epicenter when the shots happened.

DARBY: And the way that they've treated the attacks.

HANNITY: It doesn't surprise me, because they're afraid to say the words "radical Islam," like the president is afraid to say it.

All right, Brandon, good coverage. It was through Breitbart that I got the initial report last night. Thank you very much.