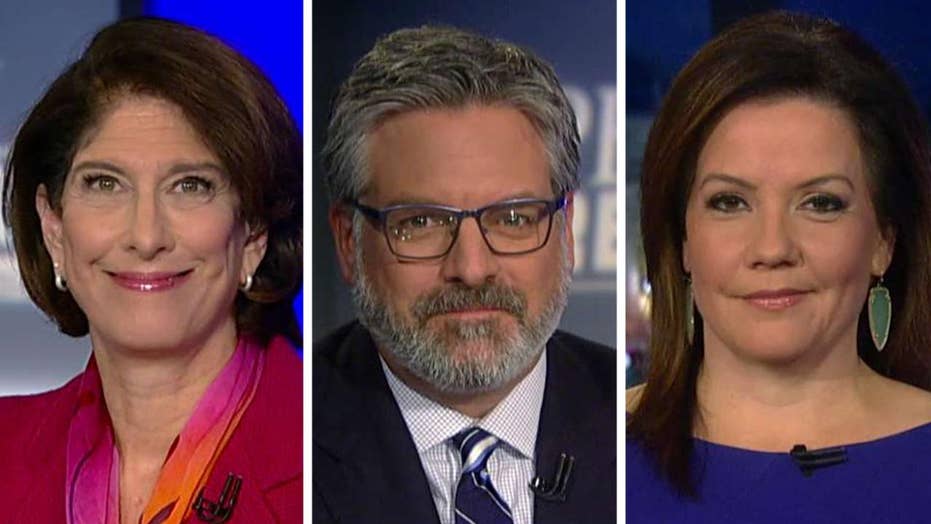 Options for Senate GOP in light of Moore allegations

This is a rush transcript from "Special Report with Bret Baier," November 13, 2017. This copy may not be in its final form and may be updated.

SENATE MAJORITY LEADER MITCH MCCONNELL, R-KY.: I think he should step aside.

UNIDENTIFIED REPORTER: Would you encourage a write-in campaign with Senator Strange?

MCCONNELL: That's an option. We are looking at whether or not there is someone who could mount a write-in campaign successfully.

UNIDENTIFIED REPORTER: Do you believe these allegations to be true?

MCCONNELL: I believe the women, yes.

ALABAMA SENATE CANDIDATE JUDGE ROY MOORE: Three days ago The Washington Post published another attack on my character and reputation, trying desperately to stop my campaign. These attacks obviously involving a minor are completely false and untrue.

BRET BAIER, ANCHOR: Another accuser coming out today saying that Judge Roy Moore attempted, she said, to rape her when she was 16. Judge Moore tweeting out in addition to what he said there, "The person who should step aside a Senate Majority Leader Mitch McConnell. He has failed conservatives and must be replaced, drain the swamp" as the calls for Moore to step aside out of this race in Alabama.

Luther Strange, who ran against Judge Moore in the primary just moments ago made a comment outside the capital to gathered press there. Expecting specifics soon, but basically he said the allegations are very serious. It's up to the people of Alabama to make sense of all of this and decide how they want to proceed. Asked about ruling out running, he called it an unfolding story and did not want to get into speculation. Alabama, as I told you earlier, has what's called a sore loser law, so he lost the primary, as did Mo Brooks. Neither one of them could be on a ballot, but they could launch a write-in campaign there.

OK, Mollie, every day, obviously this is another iteration of what we are learning, more accusations and more Republicans, really, coming out saying this should be come to an end, this race.

MOLLIE HEMINGWAY, THE FEDERALIST: So after the news on Friday it was kind of interesting to see what happens now. And today we have yet another very sickening allegation about improper behavior, assault against a minor. And it's very difficult to report on these stories and respond to these stories when you are dealing with not just the sensitivity of the issues but how to know what really happened.

But it's not surprising that a lot of people are finding that this is still a problem, that more stories are coming out, and this is not good for Roy Moore. He has denied it, but he kind of equivocated in some of his denial which is not giving people a lot of confidence.

So what I'm interested in is this is all happening while Donald Trump is on an Asia tour. He did not support Roy Moore during the primary. He said he would support him as the winner of the primary. I'm curious what he will do when he returns. I have a feeling he's not -- he would not enjoy that this is happening, and he might weigh in and that might be what is decisive in this case.

BAIER: Listen, Mara, Alabama is deep red in its inclinations politically. If there was a write-in campaign, it would have to be somebody big to be enough to overtake somebody who is actually on the ballot.

MARA LIASSON, NATIONAL PUBLIC RADIO: Yes, because if it wasn't big, it might just corral all those Republicans who have been flirting with voting for the Democrat, and then they have somewhere to park and Roy Moore could still won if it wasn't somebody so big that could literally won in a three- way race.

BAIER: Or the Democrat wins --

LIASSON: Or the Democrat wins. So what I'm saying is the write-in idea is fraught with peril. You've got to get the right person if the Republicans are planning to have that person win the race. So that's very tough. But the one clue for Donald Trump, and I think Mollie is right, what's he going to do when he comes home, Kellyanne Conway was pretty tough this week about Roy Moore. She didn't say "if these are true." she said this is the kind of thing -- somebody should not be in the Senate with his behavior. That may be a clue as to what Donald Trump is going to do when he gets back.

BAIER: Steve Bannon does not feel that way. He's been out and about talking on different outlets, and let's take a listen.

BAIER: Not sure how the room responded to that whole argument, but that is the argument he's making.

STEVE HAYES, THE WEEKLY STANDARD: I guess I'm not surprised that he's the argument is making. He's the one who gave a career to the Milo Yiannopoulos who writes for Breitbart and has defended similar kinds of things in the past. So now you have got Steve Bannon defending somebody who I think has been credibly accused of assaulting, interest in underage girls. He did the same thing with Milo Yiannopoulos. He didn't defend him but he certainly boosted his career and stood by them.

To me the real question -- I think the Republicans are likely to get behind somebody for write-in campaign. I think the big decision came today when they decided we are not going to have anything to do with Roy Moore from this point forward. Having made that decision --

HAYES: NRSC saying that, Mitch McConnell's comments. I think the real question is who they get behind, who they are recruiting. You can be sure that over on the other side of Capitol Hill, they are making phone calls furiously to try to enlist somebody who they think given in the event of a Doug Jones win, a Republican loss, could carry the banner of credible conservatism in this race in a way that Roy Moore just can't.

BAIER: So one idea out that's been floated out there, and The New York Times had a piece about this, one idea now being discussed under this scenario, brought up by two different White House officials who spoke on condition of anonymity, would be for Governor Kay Ivey of Alabama to immediately appoint Attorney General Jeff Sessions to what had been his seat when it becomes vacant again. Mr. Sessions remains highly popular among Alabama Republicans but his relationship with President Trump has waned since he recused himself from the investigation and the role that Russia played in last year's campaign. I don't know if that's wishful thinking by some inside the White House or -- I know the Justice Department has said privately that Sessions has no interest in going back to his Senate seat in Alabama. Whether he has a say or not, we don't know.

HEMINGWAY: It's interesting that that came from two White House sources because that might give us an indication of where Trump is leaning. It's also interesting that the Department of Justice said that Sessions has no interest in that. This is a plan that only works if Sessions for some reason wants to go back to the Senate. It is absolutely true that Republican leaders do need to think about the Republican voter. And I don't know if they find it as persuasive that it's OK to give this seat up to Democrats as Republicans here in Washington D.C. think. I don't think people are that committed to Roy Moore but they are probably very committed to keeping that seat Republican and they would like to see what happens when Republicans win an Alabama Senate seat.

BAIER: Because the Senate math gets a little dicey when you start adding up 2018 in some of these states without Alabama.

Speaking of the Justice Department, the Justice Department will not rule out, we are being told, opening another special counsel investigation into Uranium One and the Clinton Foundation. Fox News has learned that Attorney General Jeff Sessions has directed senior federal prosecutors to evaluate certain issues requested by Congressional Republicans involving the sale of Uranium One and alleged unlawful dealings related to the Clinton Foundation. The letter to the House Judiciary Committee directs senior federal prosecutors to evaluate these issues raised and will make recommendations as to whether any matters not currently under investigation should be opened or investigated further. So a little breaking news late this evening.