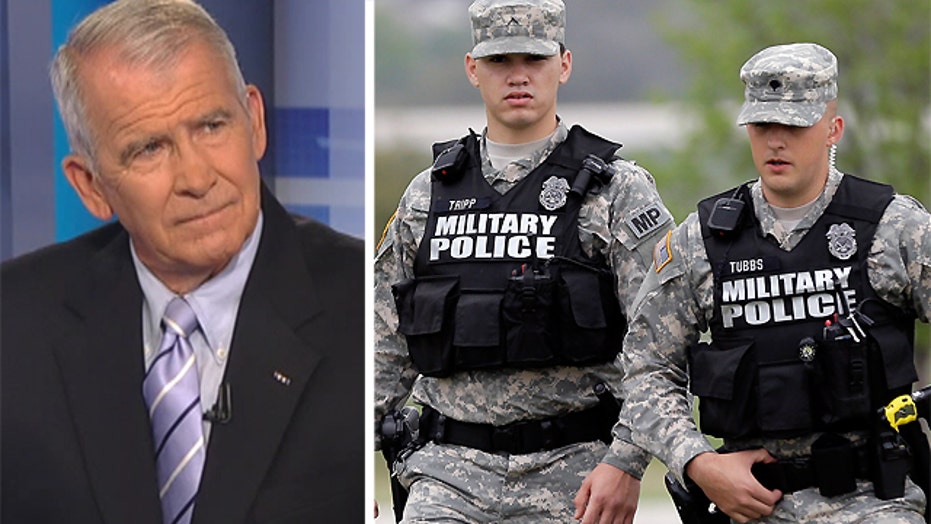 Military raises alert level, but are we really protected?

Col. Oliver North on what the US military's decision to raised its alert level to 'Bravo' n the face of treats from ISIS means

This is a rush transcript from "On the Record," May 8, 2015. This copy may not be in its final form and may be updated.

GRETA VAN SUSTEREN, FOX NEWS HOST: This reality is awful. ISIS is expanding its reach, including right here. How did we get to this point? And is enough being done to protect our citizens at home?

Here's the thing that bothers me, is the security has been elevated at military bases where they have guns. Apparently, there's not a specific credible threat. Shouldn't the rest of us be worried? We don't have those guns and we haven't gotten a security alert.

OLIVER NORTH, FOX NEWS HOST, 'WAR STORIES': Garland, Texas, is a perfect example. What happened in Garland, Texas, the FBI gave them a three-hour warning, an alert that one of those terrorists was headed that way. It didn't get to the people who were actually on scene. It apparently arrived at the Garland Police Department. It was never given over to the -- thankfully, a traffic cop, who I may understand may be a NRA marksmanship instructor -- if that's true, I'm glad -- managed to drop both of them before they could do any further damage. They did wound one school resource officer.

Look, this has been going on for a long time, and that is not news to this White House. I know the White House was shocked back in February when it was announced that 20,000 foreigners, Westerners have joined ISIS. Back in 2014, ISIS announced that they were targeting military personnel and police. They made an announcement. They even made a propaganda broadcast about it. Last Saturday's three-hour warning ought to tell us, one, we don't have enough intelligence. Number two, we're neat going to have enough intelligence. And number three, the only way to deal with this is the way it was deal with back when I was at the White House. My family was targeted. My family was picked up and moved from home to a military base and then when we moved back to our homes, because I had to go back to work, we had 37 federal agents who lived with us until I retired from the Marine Corps.

Here's the reality. Today, you can't do that with military families spread out in almost every civilian community. Second, they've been targeted by name over the Internet. Those people need to know that they have somebody they can call and get instant help and backup. Somebody has to cover their six.

What ultimately has to happen, Greta, the only thing that's going to stop it is the same thing that stopped it for my family, the person who targeted my family, the head of Islamic jihad, is dead. These guys need to be dead, too, Greta.

VAN SUSTEREN: Look, we are now beginning to fight it here on our own soil. That's the truth. And the fact that they are recruiting here in the United States via the Internet, I mean this is -- and if you look at the map we've put up, ISIS --

VAN SUSTEREN: -- may have started in Syria and in Iraq. You've got Boko Haram in North Africa. You have them training together. You have al Qaeda.

VAN SUSTEREN: It's the most incredible metastasis you can imagine. So we can't just sit here every night talking about it.

NORTH: To my point, the only solution is to kill the leadership. Al Baghdadi has made a propaganda video, those death squad videos that we've seen. He's advertising himself as the savior of Sunni Islam against the Shiites and against Tehran. Al Baghdadi and his leadership cadre have to go, and the threats will stop, because they won't be able to recruit anymore, because they can't show that they're actually, quote, "winning." That's the answer.