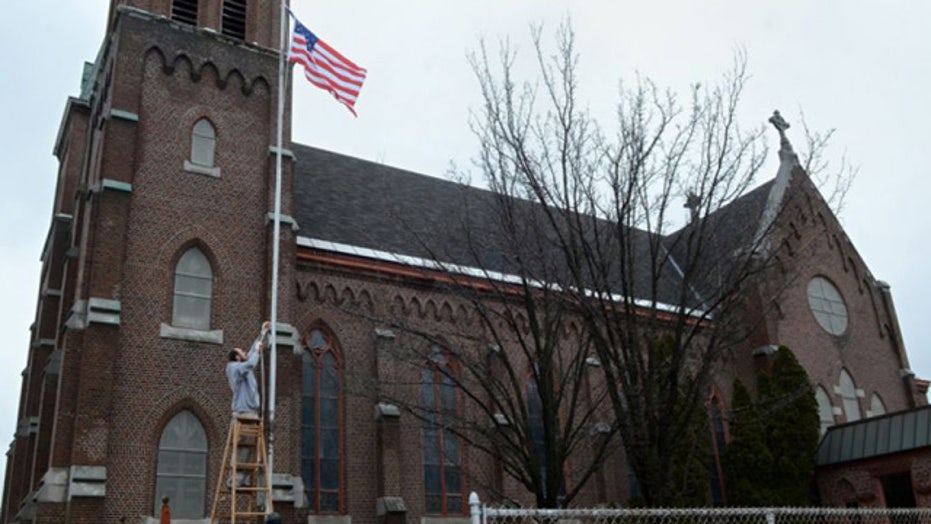 This is a rush transcript from "The Kelly File," August 5, 2014. This copy may not be in its final form and may be updated.

SHANNON BREAM, GUEST HOST: Developing tonight -- a new challenge to the Feds over a secret plan to target churches. One state's attorney general is now demanding to know exactly what is in that IRS deal with an atheist group to investigate what pastors are saying from the pulpit.

Scott Pruitt is Oklahoma's attorney general, he is a Republican and joins us live. Mr. Attorney General, thank you for your time tonight.

BREAM: All right. Let me ask you about this. A lot of questions because we don't have details. What are you asking the IRS and DOJ to tell you, and what are the red flags for you?

PRUITT: Well, you just said something very key -- you said, there are no details. And that is primarily the concern, that there's been a settlement that's been entered into by the Freedom from Religion Foundation and the IRS. And there was a lawsuit that was filed in Wisconsin and this settlement occurred. And this organization is an organization that has referred a bishop in Wisconsin to the IRS for enforcement for sharing his scriptural views about abortion and homosexuality and he's done the same thing with the Billy Graham Association as well.

So, this settlement is of great concern. Because if the IRS has agreed to new protocols or new enforcement, under the law, this goes to the content of what a pastor is going to say in the pulpit, we need to know about it.

BREAM: All right. So, the group says, and I talk about the co-founder there, Dan Barger who says, listen, we're not asking the IRS to do anything special. We're just asking them to do their job. Because in our estimation the tax code and the so-called Johnson Amendment which was from then-Senator Lyndon Johnson says, essentially that churches and charities if they're 501C3s cannot talk about political candidates.

Now, you mentioned the one topic there, with the church from Wisconsin. And I'm trying to find our exact facts here. But essentially there was a sermon that was given or something sent out that said you can't vote for somebody if you're a Catholic, you can't vote for somebody who is pro-choice. It just square with the teachings of this church. They didn't mention a candidate but Freedom from Religion Foundation said, that's like telling them to vote for Mitt Romney. So, where do you draw the line?

PRUITT: Well, that's -- the traditional view and you cited it Shannon is under the Johnson amendment, a pastor can't endorse from the pulpit, a candidate endorsement. There is a concern that this has now reached content, that if a pastor engages in scriptural teaching around the sanctity of life or the sanctity of marriage, that this organization believes that that is considered electioneering or politicking under the IRS code and has referred it for enforcement to the IRS. If this settlement reaches that level that's a whole new level of enforcement and we need to know about that because that shouldn't be something done in secret.

I mean, Shannon, the other issue is that litigation -- when you have settlement, you can't regulate through litigation, you can't adopt rules through litigation. If the IRS has adopted new protocol, that's considered rule making under the administrative procedures act and they can't do that through a lawsuit. They have to go through open processes, notice and comments.

So, there are concerns here about the process, but also whether this group has achieved a victory as they've held it, to get into content beyond candidate endorsement.

BREAM: Yes. And you mentioned the issue with Billy Graham's ministry. And essentially it was a newspaper ad that urged voters to consider these issues about abortion and same-sex marriage and that kind of thing and "praying that we will turn our hearts back to God." Freedom from Religion Foundation complained about that. If they come to power now, to reach a deal with the IRS, how far do you think they're going to go?

PRUITT: Well, we need to know. I mean, that's the reason the settlement needs to be disclosed. That's why we've sent the letters to the Justice Department, to Attorney General Holder and the commissioner at the IRS to disclose that settlement, to see if there are new protocols of enforcement that go to content as you have described.

You know, we know that there have been 99 churches, Shannon, that have been referred for enforcement to the IRS for further inquiry. This is a very disconcerting settlement that's occurred. This group has hailed it as a victory. This group has a very different view of the first amendment and a very different view of the traditional enforcement under the Johnson amendment. And if the IRS is engaged in -- settlement and not gone to rule making, we need to know about it so we can take appropriate steps.

BREAM: And we know a lot of churches out there, pastors, priests are saying to the IRS, bring it on. They want this legal challenge so they can fight that Johnson amendment or at least the interpretation of it in court. Mr. Attorney General, please let us know if you get response from the IRS or DOJ. We'd love to have you back. Let's talk about it.