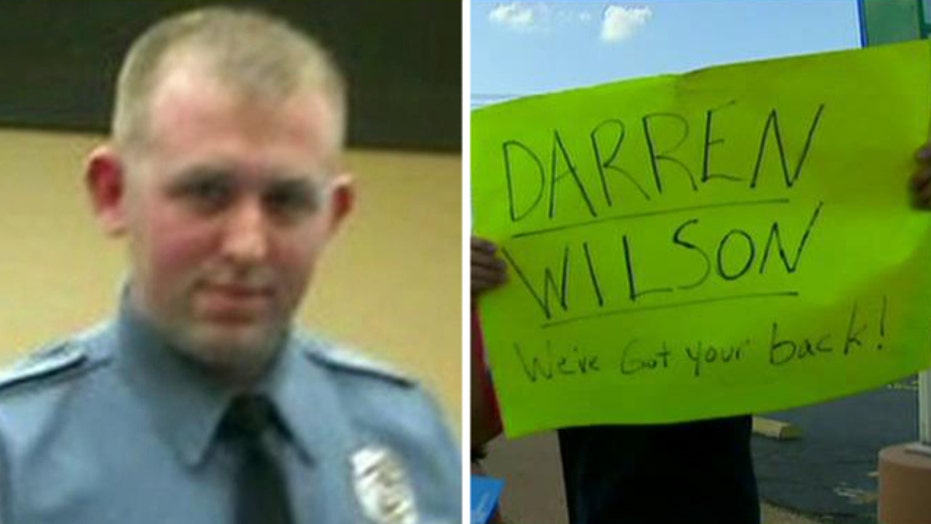 This is a rush transcript from "Hannity," August 25, 2014. This copy may not be in its final form and may be updated.

SEAN HANNITY, HOST: While we have heard from numerous supporters of Brown during the protests throughout the past few weeks, my next guest, whose identity we are concealing for her own safety, has been a vocal supporter of Officer Darren Wilson. Now, she's also the wife of a Missouri police officer. And she joins me now.

Thank you for being here. Why do you -- first of all, you started a Facebook page. You got 66,000 likes, or some odd number, very high number.  Why do you fear revealing your identity?

"TIFFANY," OFFICER WILSON SUPPORTER: Because I have other people to protect other than myself.  We have had death threats and threats to ourselves on the page, through posting on the actual page and through messages.

"TIFFANY": It's a way for us to show our support for law enforcement by wearing blue. We feel that's a way to get our message out without having to upset anyone, just showing our support.

HANNITY: And that was for this Monday, for today, or...

"TIFFANY": It was -- it's for this Monday and next Monday. I have had people ask if we can do it every Monday in September, and I'm absolutely OK with that.

HANNITY: What is it that specifically is making you angry about this?  Because I'll be honest, I don't know what happened yet, and I'm trying to piece it together.

You know, when I first heard the initial eyewitness reports -- you probably heard them, as well, one from Dorian Johnson who was involved in the robbery with Michael Brown -- three people I saw on TV say the same thing, which was that Michael Brown was innocent, shot in the back, had his hands up, et cetera. And then a different story emerged.

"TIFFANY": I do not believe that -- none of us know. Nobody knows unless you were actually there that day what exactly happened. I am here as a law enforcement officer's wife to show my support for my family of blue. And that is why I started the page.

HANNITY: What if it turned out he was -- he did the wrong thing?

"TIFFANY": If Officer Wilson did?

HANNITY: Like, for example, if Michael Brown, as some eyewitnesses have said, actually had his hands up and was shot in cold blood, how would you feel then?

HANNITY: No, I understand your support for law enforcement. But you know, this is specifically to support Darren Wilson. Now, I think that there's been a massive rush to judgment here. And it's interesting...

HANNITY: ... as time has gone on, there's certainly been more doubt created. I've heard audiotapes. I've heard other people saying, you know, what injuries he may have suffered, the fact that Michael Brown may have charged at him. If those stories turn out to be true, that would be the justifiable use of force under our law. He would have the right then to defend himself and his own life. But we just don't know yet. So why move to...

HANNITY: ... support him -- are you supporting, in other words, more his right to get more fairness, that there's been too big a rush to judgment?

HANNITY: Is that where your indignation is? We don't give police the benefit of the doubt? Is that what you're saying?

"TIFFANY": Correct. I feel like there was such a judgment from the moment they said who he was and his name.

"TIFFANY": And I thought immediately, this man needs support and he needs to know that there's other people standing behind him that are here to support him. And we don't have to be loud, but we can show our support.  And he can read everything that has been written and know that there are people here not just from the United States, but we're getting messages from all over the world of support for this officer.

HANNITY: Let me ask you this question. You've seen the graffiti, the only good cop is a dead cop. Even from day one, people were chanting, Get the police. You know, what's his name, Darren Wilson, what do we want -- how do we want him, dead. Very, very shocking. Why do you think there is so much anger in some communities towards police officers?

"TIFFANY": I don't think people that are making those comments understand that police officers are real people, too. They have families.  They're very passionate about their job. But that doesn't mean that they're not a real person. I think people forget sometimes that they are -- they're very proud of what they do. But they're still a person like you and I.

"TIFFANY": And I feel like those that say -- that are making judgments based on their job and their lifestyle, rather than the actual person that they are, and they're wishing death upon somebody they don't even know.