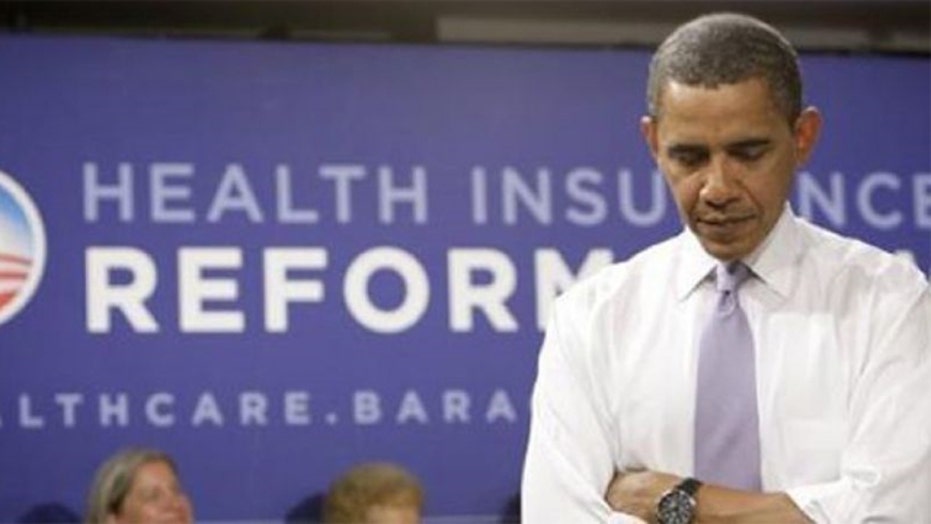 ObamaCare 'co-ops' could leave taxpayers on hook for $1B

REPORT: OBAMACARE "CO-OPS" IN DANGER, COULD LEAVE TAXPAYERS ON HOOK FOR $1B

JONATHAN HOENIG: It is a lot like Solyndra. It's government intervention in what should be a private market. You can't have a billion dollars of taxpayer money-that's your and my money-- going down the tubes. Government cannot create competition. Competition comes from a free, unfettered market, and a profit motive-which of course the President has been against from the onset. And government is not loving parents; it's a gun. It's force. So co-ops like these, just like the whole green energy spending, is designed to give the appearance of a free market, the appearance of choice when in fact it's a government gun, it's government force behind the whole thing. That's why it's doomed to fail.

JUAN WILLIAMS: You're so pleased with the insurance markets in terms of health insurance. That's why Americans are up in arms over the current state of healthcare in this country. That's why Obamacare exists. Let me just tell you, you know what? In terms of this, the co-ops-the co-ops are an example of the private market, the insurance companies, putting so many obstacles in the way that they have made it difficult for the co-ops-- which are basically small insurance groups started by hospitals, doctors, community groups-- made it hard for them to succeed because they can't sell to the big employers-- they'd be the biggest, most profitable, lucrative market-to please the insurance companies that said it was too much of a government creation.

MICHELLE FIELDS: Spending is out of control. We've got people selling food stamps on Craigslist now for cash. This is not only irresponsible, it's immoral, because it's my generation that's going to have to inherit all of this debt. We are $17T in debt. That means every American taxpayer will have to spend $138,000 out of their own money in order to get our country out of debt. And yet we still have Juan and his buddies in Washington saying "more and more spending". It's crazy!

JUAN WILLIAMS: The idea is to deter the spread of aids. I think that if you're stopping Americans who go to Tijuana and these places to have sex in this way, I don't think that's a bad thing. But I will say when you put it as "Americans studying male prostitutes in Mexico" it makes it seem like it's a total folly.

JONATHAN HOENIG: It is a lot of money. $400,000 is a lot of money. $1 of taxpayer money is a lot of money. And it's beyond embarrassing the way that it's treated by government. I think it's criminal. Hundreds and hundreds of billions of dollars wasted on functions like this, which do not serve and do not respond to the actual proper function of government, which is protecting individual rights. Our government is ten times the size now than it was 100 years ago when we actually became a superpower. But unfortunately, I think this progressive philosophy has continued to grow, and with it the notion that basically government can do whatever it wants. Mexican prostitutes; worthless grants for the Department of Humanities, when government's actual roll is protecting individual rights, and that's it.

JONATHAN HOENIG: It's just another example of why we do need tort reform in this country. She ordered hot coffee. She spilled hot coffee. How much more clear do you have to get? We're talking about the total dismissal of individual responsibility in our country. I'll tell you, if you were to order a burrito and choke on it because you're eating it too fast is that Taco Bell's fault? No, it's your own fault. So I don't like infringing on any American's right to seek damages, but I think until the culture improves, and the judicial branch improves some tort reform is absolutely needed.

MICHELLE FIELDS: There's an element of personal responsibility that has been done away, unfortunately, in this country. We have excessive litigation, and the problem with that is that it's slows down economic growth, it increases unemployment, and it increases the cost for businesses to work. I mean let's just talk about healthcare. If you talk about healthcare costs, you need to talk about tort reform, because we have tons of doctors in this country now having to practice defensive medicine. They're ordering tons of unnecessary and expensive tests because they're scared of being sued. It's ridiculous!

JUAN WILLIAMS: I think that corporations do have to be responsible. This is not a "get out of jail" card for every corporation that wants to do something that amounts to negligence. I'm not in favor of frivolous lawsuits of any kind, but you go back to that case-the famous case of the lady that initially got $2.9M-that woman was in the hospital for eight days and had to have skin grafts. People don't realize, they make jokes about it, but she suffered real pain. Why? Because McDonald's made a decision to heat that coffee beyond a reasonable temperature.