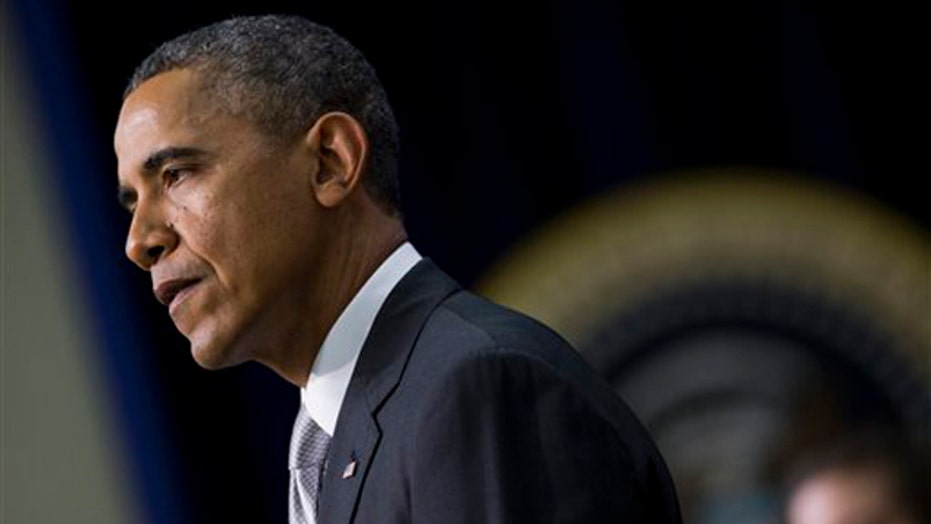 Report: ObamaCare site has no system for exchange payment

This is a rush transcript from "The Kelly File," December 3, 2013. This copy may not be in its final form and may be updated.

MEGYN KELLY, HOST: Breaking tonight, a new health care bombshell. With the administration forced to admit a huge failing in the system that is supposed to provide insurance for millions of Americans, officials tonight taking a dramatic step to try to get insurers the payments they need for coverage. And wait until you hear how they're doing it.

Welcome to "The Kelly File," everyone, I'm Megyn Kelly. This news just broke about an hour before we came on the on air. ObamaCare officials confirming there is still no system yet as we told you last night for moving the money from the ObamaCare customers to the insurance companies. The subsidies that the government promised the insurance companies it would give them in order to give, you know, coverage to these millions of Americans, great, it was a wonderful promise. Unfortunately there was no mechanism to actually cut the check.

The problematic healthcare.gov website, it's not built yet. That part of it that provides for payment, not built yet. And for days, many journalists have been demanding answers of this administration, wanting to know, you're touting this improved healthcare.gov. How does the system work without a payment mechanism? There is no cash register. What would make the insurance companies actually provide coverage when they haven't been paid? We reported this to you last night. Without a way to get payment to those companies, how are people actually going to get coverage?

So now tonight, at 8 p.m., get a report with an answer from Reuters news. The administration is going to let the insurance companies estimate what they should get. And then the Feds are going to cut them a big check and figure out later what the real amounts are supposed to be. That is your money, that is your money. They're going to do a back in the envelope, you know, the insurance -- I think it is this. And then the Feds are going to pay it.

Think about that for a moment. Think about that. We're talking about one sixth of the U.S. economy, and this is the system that they have now settled on, the least privately, late in the evening. And then consider what the president said just this afternoon.

PRESIDENT BARACK OBAMA: The bottom line is, this law is working and will work into the future.

Avik Roy is a senior fellow at the Manhattan Institute, a national review columnist and author of "How Medicaid Fails the Poor."

This is unbelievable. I mean, this is from the Reuters report an hour ago. Health plans will estimate how much they're owed, and then they will submit that estimate to the government. Once the system is built, the government and insurers can reconcile the payments made with the planned data to true up the payments.

Oh, joy. So it is basically an honor system if I'm reading this correctly.

AVIK ROY, SENIOR FELLOW, MANHATTAN INSTITUTE: Well, the basic thing to understand is it is not a bailout of the insurers, it's a bailout of the president. Because two weeks ago we heard from one of the top IT officials in the administration, that the systems to pay the insurers hadn't even been built yet.

ROY: This is two weeks ago.

KELLY: Thirty to 40 percent of HealthCare.gov he said, has not yet been built yet, and we talked to the time about, well, OK, what part exactly is that? And they revealed. There was a payment mechanism.

KELLY: So, now for weeks, people have been saying, how are the insurance going to get paid? And this is the solution, Avik?

ROY: This is the solution.

KELLY: We're going to trust the insurance companies to say, I think you owe me X million in subsidies for the following people who have submitted for coverage, is that basically how it is going to work now?

ROY: Basically, because what is the alternative? The alternative is, if the insurers don't get paid that way, then the insurers will hemorrhage money trying to cover all these people and they will withdraw from the market.

KELLY: They're not going to do it.

ROY: So, the Obama administration saying, well, the only way we can keep the insurers participating in this market is to pay them in advance and thrust them.

KELLY: When if the person is successfully enrolled through healthcare.gov, and there had been a payment mechanism portion of the website, that portion would have what there? People would have had to enter financial data? I mean, is this the portion of the website that calculates how much of a subsidy they're going to get and then tells the Feds, "OK, cut that amount of a check to Aetna"?

ROY: It is the simple system of when the individual signs up and that he signs it for a particular plan, he has to actually pay the insurer for whatever the subsidies don't cover. And the insurer can't get paid for that because that system has not been built. So the insurer -- you are not officially enrolled if you haven't paid the insurer. Technically enrollment doesn't happen unless the insurer gotten a check from you. And so you may go to the doctor and think you've signed up on healthcare.gov, the doctor says, you're not insured. I don't have an insurance policy for you.

ROY: And that's when the people say, well, I just conceived all these --

KELLY: Wait. Now, let me ask you, because I think you might be conflating two issues. You're the expert, not me, but there are two issues at least tonight with this system. Number one is reports today are everywhere that up to 30 percent of the people who have enrolled on healthcare.gov only think they have enrolled. And that in fact, the enrollment has failed and that when they go to their doctors on January 1st to get coverage, they're going to find out the hard way that their attempted enrollment failed and they don't actually have coverage. But problem number two is, 30 to 40 percent of their website has not yet built, and it's the portion that accepts payment, and this announcement tonight relates to issue number two. They're trying to get a way to improve the payment situation, and according to this Reuters report, they are meaning to cover the subsidies and premiums that the insurance companies are waiting for.

ROY: So as you say, there is two issues. In the private sector, in the private health insurance market the way it works if you're not officially enrolled in a health plan until you've sent a check to the insurer, the insurer has receives payment, then you are enrolled. So what the administration's calling enrollment is not really enrollment. They're just saying, you've been sign up correctly for the plan, but you could be signed up correctly for a plan which is two thirds you're talking about.

ROY: And still not have paid the check to actually be officially enrolled.

ROY: So that is the problem, the payment is what creates the enrollment. Signing up for a plan but not paying does not count as enrollment.

ROY: In this case, we have more reason to trust the insurers than the Obama administration because if the insurers are dishonest, everyone is going to get mad at them. And they're already so politically under the gun, they're just trying to keep their heads down and not get shot.

KELLY: But do you have any idea of the waste and fraud and abuse that are in this system already? And now, instead of having an actual system that will calculate the payment and make sure that the T's are crossed and I's are dotted, we're going basically on an honor system where the insurers are going to tell them this is how much of the American taxpayer's money I want and we're going to start cutting checks.

ROY: The real area where the waste fraud and abuse is an issue, is in the size of the subsidies, because that's where the true honor system is. There was a report issued today, by the auditor of the IRS that says that the IRS doesn't have the system to check what your income is, to see what subsidies you are eligible for. And that is going to incentivize a lot of Americans to game the system and say, you know what? I actually didn't make that much money this year, therefore give me a bigger subsidy and bigger check. That's where the fraud is and that's where the real problem is.

KELLY: My head is swimming with the amount of issues that we've just ticked off just in this one segment. Avik, thank you for being here.