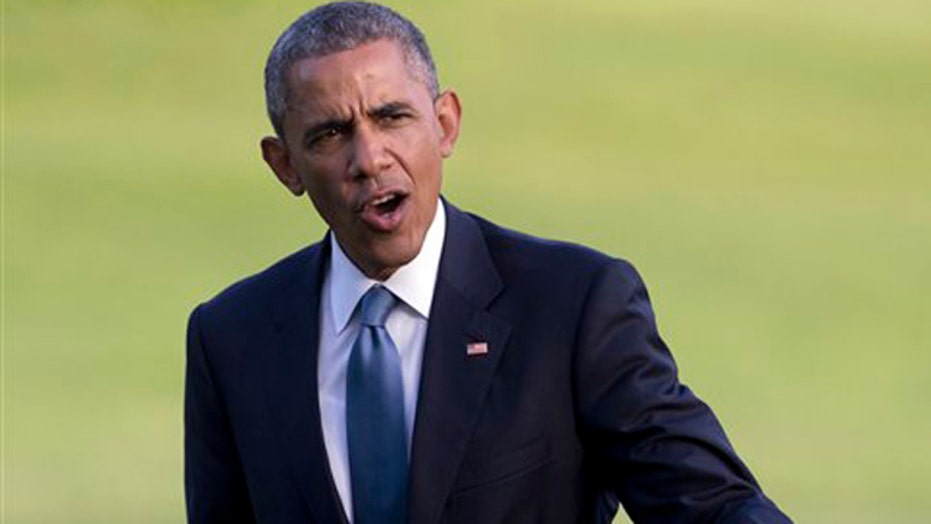 Obama takes dig at Fox while discussing war on poverty

Fox News to blame for everything?

President Takes Dig at Fox While Discussing War on Poverty

Charles Payne: Yeah. He's definitely on to me, OK? And his minions have let me know. It's funny that he says fox news is the leading proponent to cast the poor sponges as leeches and users, but I tell you what, on the other end of the spectrum without a doubt, President Obama is a leading voice in a sense that someone born poor in this country, particularly black and poor, have no chance that they have seer row opportunity to pull themselves up by their bootstraps and they are somehow an astronaut shot into space, no gravity, nothing to hold on to, nothing to grab on to, no way to control their own destiny and to me that's a bigger crime.

Charlie Gasparino: What is interesting about President Obama, you would think a man of his intelligence, which I think he has a great amount of intelligence and a lot of researchers, could have come up with the whole list of how badly we comment on poor people by himself. But he didn't. Guess what he got it from? He got it from Media Matters. That's the left-wing, I don't know what they are, sort of a commentary that dedicates a lot of stuff about fox. They came out with a list, which I made, by the way, I was very happy I actually made the last item on beating up on the poor. They came out with the list, I think Charles was in it 25 times. The greatest thing against war, that was picked up by Jon Stewart. This is from the far left.

Dagen McDowell: I think he likes attention and he's going to get it from the liberals and get it from the very news channel that he openly despises, right? He likes negative attention and positive attention. But if you want to focus on poverty in this country, he has done more to transfer money to the poor and to these programs, whether it's food stamps or getting more people on disability. Whether it was large parts of the stimulus. Whether it was ObamaCare. You still have wages that are not keeping up with inflation. Media and household income, not rebounding with the economic recovery. And inequality is greater today than several years ago, period.

Adam Lashinsky: Now, look, we all are sensitive to criticism. Some more than others, but I'm telling you, there's a pattern to this behavior. And a pattern to how he reacts when anyone, even on his side, questions him. Whether it's Elizabeth Warren or Liz. You know what I mean? That's what I find very telling and very revealing.

Charles Payne: I agree 1000 percent, Neil, but this is not necessarily new. The unions are -- one of the reasons they have crumbled with respect to a percentage of the total workforce is because these kind of policies. They are in it for themselves 100 percent and the whole hierarchy and the seniority kind of thing is discouraging. We saw it in the throes of the great recession when certain police departments wouldn't hire young cops because older cops had to get all the things, and that's the way the unions work. We see it with union dues and across the board over and over again where the things that they are sort of worried about that they preach they are practicing.

Dagen McDowell: It's about building the number of people in the UAW, period. It's recovered in the last six years but extremely slowly. What the UAW membership is 400,000. It was a million and a half people in the late '70s. It's about adding numbers of union workers and collecting the dues. And it fills the coffers so they can donate to democratic causes.

Charlie Gasparino: But they are doing something really good here. I think they should be commended. The guy learning the craft is -- why are you suggesting they are not?

Adam Lashinsky: I'm going to get all ethnic on you at the same time. I find it very uncomfortable when I have to follow him when he says what I'm going to say. And furthermore, I have to agree with him. Unions are not monolithic.

Dagen McDowell : The tragedy is going to be someone flies one near me on a beach somewhere because I'm going to take a baseball bat and walk my way across the country and destroy every hobbyist drone in existence. And then the FAA is getting in the way of commercial drone use. They won't sign off on amazon using them. They're getting in the way --

Julie Roginsky: I think we have two things. The hobbyists that used to be relegated to the parking lot of an empty mall, just four or five geeks flying these things. Listen, that might be the way they introduce themselves to you but -- but we are hurting the commercial area. Other countries are way ahead of us on this. It's a shame because we're missing amazing opportunities. Drones will be a part of everyday life at some point. Get used to it. The hobbyists, stay away from Dagen.

Adam Lashinksy: It's really cool technology, but I totally applaud the need for government regulation to make sure they are safe.