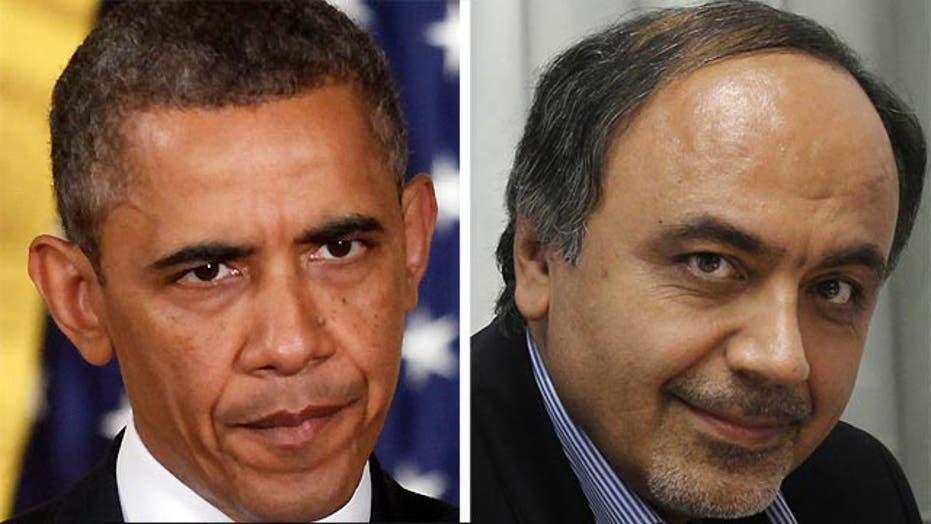 This is a rush transcript from "The Kelly File," April 18, 2014. This copy may not be in its final form and may be updated.

MEGYN KELLY, HOST: Breaking tonight, the president signs a bill banning Iran's controversial pick for a new U.S. ambassador from coming into the United States, but includes a very big caveat. The president saying in a signing statement, that he is taking the legislations as guidance, but he's not necessarily going to enforce it.

The bill is meant to keep Hamed Aboutalebi from coming into America. He was a member of the Muslim student group that held 5 2 Americans hostage for 444 days during the 1979 Tehran Embassy takeover.

J. Christian Adams is a former attorney for the Department of Justice and PJ Media legal editor.

Chris, good to see you, and so the President -- why sign it into law only to say, like, literally at the same time, this is all about Aboutalebi. And so, at the same time he signs it and he's saying, yes, but I don't really after --

J. CHRISTIAN ADAMS, FORMER DOJ ATTORNEY: Well, once upon a time in American, Megyn, when Congress passed a bill and the President signed it into law, it was treated like a law. It was not treated like a suggestion like President Obama did today with this. This bill was sponsored by Senator Cruise with bipartisan support from Senator Schumer and it passed Congress 535 to nothing.

You know, this is a president who talked a big talk during campaigns about the importance of following the law, but he simply says he can take it as a suggestion. I mean, this is what the Privy Council does for the King of England, they make suggestions. Laws are laws in this country. And the president has an obligation to follow the law and not let this unrepentant Iranian terrorist into the United States.

KELLY: He did. We have the sound bites because I want the viewers to hear it out of then Senator Obama's own mouth, what he had to say about signing statements. Listen.

THEN-SENATOR BARACK OBAMA: What George Bush has been trying to do as part of his effort to accumulate more power in the presidency is he's been saying well, I can basically change what Congress passed by attaching a letter saying," I don't agree with this part or I don't agree with that part. I'm going to choose to interpret it this way or that way." That's not part of his power. But this is part of the whole theory of George Bush that he can make laws as he's going along. We're not going to use signing statements as a way of doing an end run around Congress.

ADAMS: Yes, it's totally embarrassing hypocrisy from this president. And this isn't about some small matter. This is about an Iranian terrorist who participated in the American hostage seizure in the 1970s. The Iranians are completely unrepentant about this hostage situation. They've never paid their civil judgments. They are acting reprehensibly. If there's anything this president should have moral clarity on, it's not letting this man in the United States than held Americans for 444 days.

This is, I mean, many folks have said this is basically a middle you know what to the United States of America for Iran to even appoint this guy, but the president did not make clear with his statement tonight, he says he signs it into law but he deems the whole thing advisory, but he doesn't make clear whether he's going to follow the law in this case, with Aboutalebi, or not. They had prior suggested that Aboutalebi is not coming in. We'll see in the future.