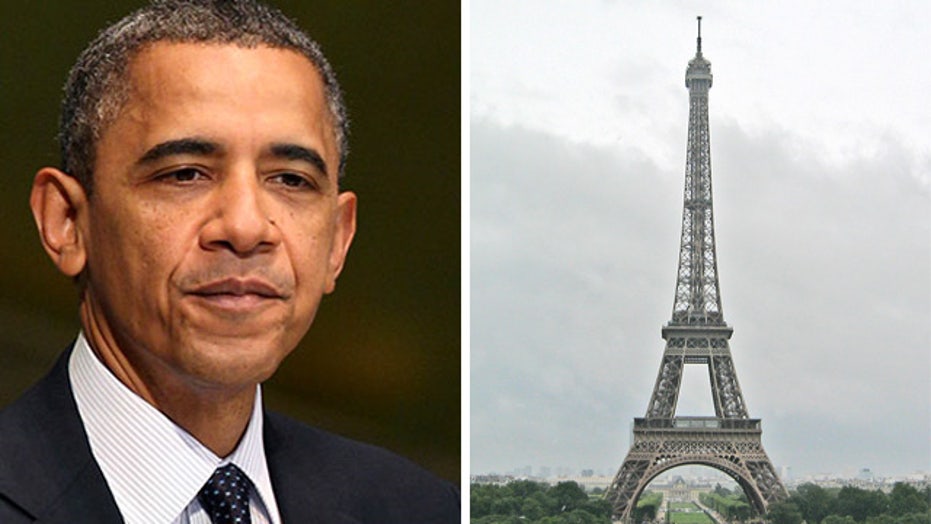 President inching US toward socialism?

JONATHAN HOENIG: His philosophy isn't that of an American. His philosophy is against a free market in a free society. So when the president talks about "workplace benefits," he's talking about government force over the economy, and you've certainly had that in France. In France the maximum work week is 35 hours. Employees get paid vacation after a month. They get their travel to and from work paid for. They get their lunches paid for. You know what the net result has been? Unemployment above 8 percent since the 1980s. If that's what the president is advocating for, he can keep it.

MICHELLE FIELDS: I think a basic economic rule of thumb is that is France is doing it, we should not be doing it. I think it's kind of funny that this president is giving business advice when this president has never even run a lemonade stand. We should not want to be like France, we should be the opposite of France. When French workers were forced to have to work more than 35 hours a week, they went out on the streets to burn tires. Is that really the type of society we want? An entitled society where they go out and protest because they have to work?

JUAN WILLIAMS: This is so ridiculous. First of all, the president was speaking in jest. The whole idea was we're a stronger economy than France. We have better economic measures on every scale.

ASHLEY PRATTE: I believe that France-and this is fact-they're trapped by a welfare state that's killing jobs and killing economic opportunity. There was actually a video put out by CBN news in Paris. They had a poll conducted that said half of the young people in France currently would leave. That's because there's zero economic opportunity, with a 23 percent unemployment rate. Here in the United States, for 18 to 34 year olds, that's 18.1 percent. so we're actually getting to the point where we're becoming France.

MICHELLE FIELDS: This is a criminal activity. All of these emails have suddenly disappeared, and six people who are intimately involved in this-their emails have suddenly disappeared. I mean they're lying like they're a bunch of third graders. President Obama is literally the president that Richard Nixon wished he was, because no one is paying attention. No one is listening to this. The only people that are covering this is Fox. We have agencies right now in the government that are being controlled by partisan politics. That is very, very dangerous.

ASHLEY PRATTE: The liberal and mainstream media are only giving credibility to stories that they don't want to do damage to the White House, because they're untouchable for some reason. So the IRS scandal, the VA scandal-that does damage because people in his cabinet and his administration are failing to do their jobs, and these scandals are outraging Americans. When you say that a poll is showing that 76 percent of American citizens think that these emails were deliberately lost, that shows a complete lack of trust in the federal government and federal agencies, which shows that this administration has a problem in communicating with the average citizen. Congratulations to Fox news for covering these things, so that way they can be exposed to the American public.

JONATHAN HOENIG: We have a subservient media. I think we have a subservient culture, by and large. I think people aren't so outraged about the IRS scandal because they believe that "hey, it is the government's money, and how they distribute it-sometimes there are some casualties along the way but you don't actually own your life." I have to say, I think both the IRS scandal and the "Bridgegate" scandal are horrific abuses of power. When government uses its guns-not against criminals, but against innocent American citizens-that is monstrous. The American people are lapdogs now, and the media reflects that.

ASHLEY PRATTE: It is responsible governance to look at the budget, assess it and make necessary cuts, but I don't think that diminishing our national defense budget is the way to go, because then we're putting American citizens as well as our troops in harm's way by not giving them adequate funding, and by doing that with a growing Jihadist and terrorist threat in the Middle East, with the Islamist Jihadists out there, with ISIS growing and taking over cities in Iraq, I really don't think this is the time to be making cuts. The last time this happened we saw Crimea was seized, and Col. Allan West actually pointed that out at a Young Americas event last week.

JONATHAN HOENIG: It doesn't matter how much we spend, though. As you pointed out, Eric, we've spent $1T plus in the last decade. The question is do we have the moral fortitude to use our military might to our own advantage, for our own self interests. This has been a decade of the "war on terrorism," which has really been a war of self-sacrifice. It's all been about bringing freedom to the Muslim street, and getting the respect of Muslims all over the world, and Iraqi freedom instead of Americans' lives and Americans' safety. So we don't need to spend a lot of money. We need to declare war on Jihad and the states that sponsor it.

JUAN WILLIAMS: I don't understand. I think what we all believe in is lower taxes, and then you say "oh no, more money down the drain with military." If you don't think we can cut the military budget, you don't think there's any area of the budget that can be cut.

MICHELLE FIELDS: The military is just like every other part of the government. There's going to be redundancy, there's going to be bureaucracy and waste that can't be eliminated. A lot of these intelligence agencies get virtual blank checks. We don't know where that money will be going. I agree with Sen. Rand Paul; let's audit the Pentagon, figure out where this money is going. If it works, it doesn't cut or fund more where it is working.