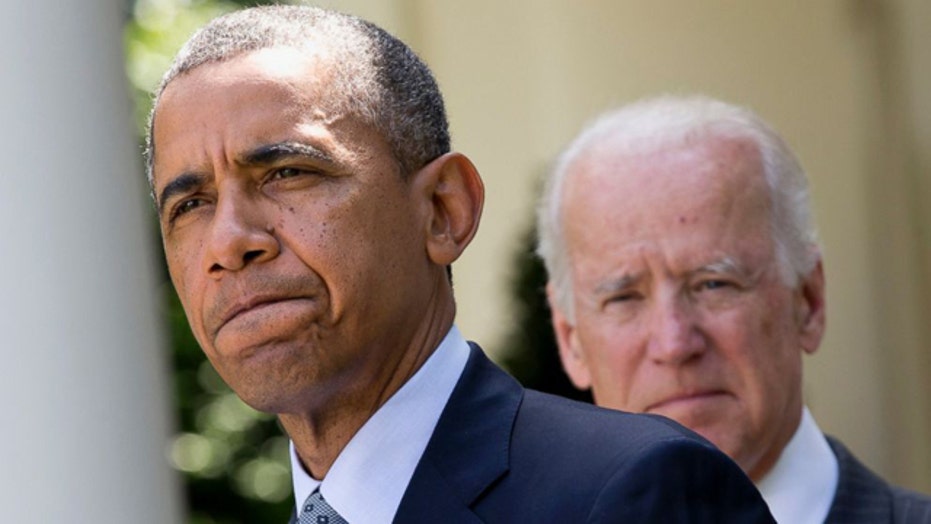 Brit Hume on why the president is lagging in the polls

This is a rush transcript from "The Kelly File," September 16, 2014. This copy may not be in its final form and may be updated.

MEGYN KELLY, HOST: Well, with polls showing the president's handling of foreign policy at an all-time low, one senior White House official last night spoke to Fox News on background saying it is not necessarily the president's policies that are the problem here, it's just the number of crises we face around the world.

Brit Hume is our Fox News senior political analyst. Brit, and so, the administration's response seems to be the people are upset with the president not because of anything the president has done. They are upset because ISIS has grown and Syria is a mess and Iraq is now a mess and this is completely unrelated in their view to anything Barack Obama has done.

BRIT HUME, FOX NEWS SENIOR POLITICAL ANALYST: Well, if the official who was speaking to our Ed Henry meant that presidents inevitably get the credit when things are going well in the country and in the world and inevitably get the blame when they're not, that's a perfectly fair point.  If he means by that, however, that the public basically does not hold the president responsible really for the situation in the world today, I think that's a dubious proposition, because these developments in the Middle East in particular and elsewhere in the world as well are the very kinds of things Barack Obama said he would not bring about, that they wouldn't happen.

In fact, Megyn, as you recall and have pointed out, he's the one who said that his very election would so change the atmosphere in the world and when people in the Middle East in particular saw him reaching out to Muslim and to the Muslim world that that would change things right then and there.

Not to mention all the wondrous things that he said he'd be doing going forward and reaching out and trying to find common ground and so on and was going to have a -- hit the reset button with Russia and all the rest of it.

But none of that is panning out very well at the moment. And the idea that people don't trace this back to him I think is fanciful.

KELLY: We need to get out of Iraq immediately with no troops. The general said, we need troops, he didn't and now Iraq is a mess. We're setting red lines for Syria and when they cross them, we're going to go bomb Syria, oh, wait, no we're not. Repeatedly the president has said things or made decisions that it had consequences. And yet he gets out there Brit and with, you know, flourish and eloquence makes an argument that seems to be accepted by so many people as, oh, OK, there's been no inconsistency. And I want to just read you a quote from -- by Victor Davis Hanson on the National Review online today, "Obama's Sort-of-War," the piece.

Look at this. "Declaring the Islamic State a jayvee force only to upgrade it later, deprecating the Syrian force free army as a fantasy of inexperienced professionals and then counting on it for support or suggesting that we are at war and not at war. There's no need for consistency in judgment given that the press will largely ignore the contradictions. In short," he writes, "teleprompted rhetoric with plenty of let-me-be-perfectly-clear emphatics can sound enough like a foreign policy that enough Americans will believe something is being done while the crisis naturally abates."

HUME: Well, I think that's an expression of what may be wishful thinking on -- I mean, I know that's not how Victor Hanson feels about it.

But look, Megyn, these things that have happened in the contradictions between what he said before and what he's saying now, are pretty glaring. I mean, you rarely see it.

Look, politicians back and fill and change positions and so on, and sometimes circumstances change and they should.  But in this situation we're talking about things that happened, you know, over a month. I mean, a month ago, it was a fantasy that these Syrian rebels could carry the fight to seriously in Syria and could have helped to topple Assad. Now they're going to be the shock troops, the infantry of the battle to defeat ISIS which has overrun part of Syria and now overrun part of Iraq.

KELLY: Right. The trained Iraqi Security Forces put down their arms and ran, but the doctors and lawyers that the president said, it's a fantasy to think these guys can do it, now suddenly there are best ambassadors, go for it.

HUME: Well, yes. They're our best troops. I mean, look, these things are pretty glaring. And I don't think they've really gone unnoticed in the rest of the media either. I mean, they're just too clear and too vivid for that to be the case. And I think people are noticing it and, look, it's reflected in the president's -- it is reflected in people's view of his handling of foreign policy but it's also reflected in his overall approval rating. Which, you know, they're bumping along near their all- time lows. Things are going very badly for this president at this time.  And if the situation in the world improves, yes, his rating on those things will improve. But that's not the trajectory at the moment.

KELLY: Uh-mm. It's amazing when you see the sound bite, you know, the two of them up against each other, the president over and over and over, can we run it? Do we have time? All right. Watch it. Just watch it.

PRESIDENT BARACK OBAMA, JUNE 13: We will not be sending U.S. troops back into combat in Iraq.

OBAMA, AUGUST 7: American combat troops will not be returning to fight in Iraq.

OBAMA, AUGUST 9: I've been very clear that we're not going to have U.S. combat troops in Iraq again.

OBAMA, AUGUST 26: American combat troops will not be returning to fight in Iraq.

OBAMA, SEPTEMBER 10: It will not involve American combat troops fighting on foreign soil.

GEN. MARTIN DEMPSEY, CHAIRMAN, JOINT CHIEFS OF STAFF: If we reached the point where I believe our advisers should accompany Iraq troops on attacks against specific ISIL targets, I'll recommend that to the president.

HUME: Well, yes, in a way it is, Megyn. But look, I mean, we know that pretty well, the General Dempsey and other senior military and other national security advisers have urged the president differently on a number of fronts. And the president has rejected their advice.

KELLY: And that is actually we're taking up with Marc Thiessen right after this.

HUME: Well, I'm just saying, if you look at what General Dempsey said today, that's not surprising. That does not in any way mean that when it gets down to it and he asks for more troops -- and you note that he said advisers -- that the president will agree to that. He's indisposed to do that. Look, he thinks American troops are likely to make things worse.  That's a core belief of his.