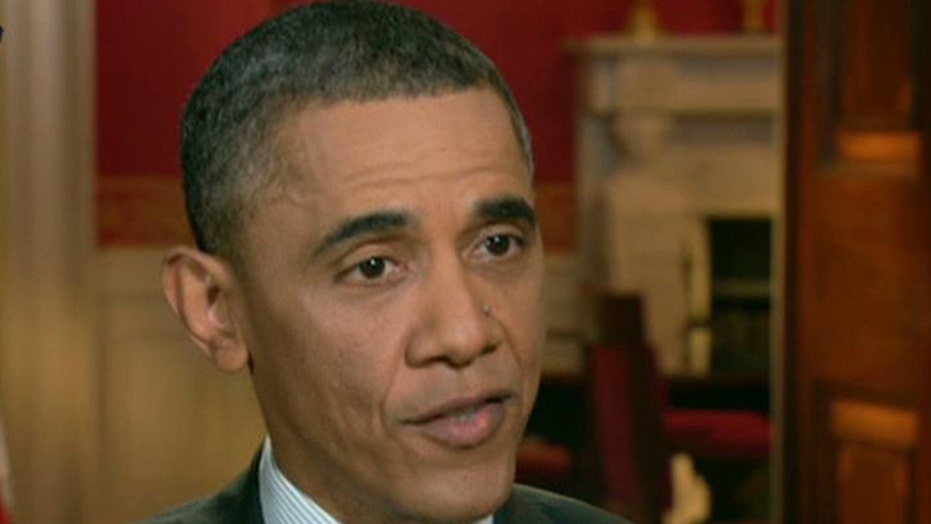 SENATE DEMOCRATS' BUDGET BOOSTS SPENDING BY $2.1T OVER NEXT 10 YEARS

CHARLES PAYNE: I tell you, when I saw that George Stephanopoulos interview I wanted to scream, I wanted to cry, and I'm not sure because I felt the same way with the Dennis Rodman interview. The idea is that there's no immediate crisis. Listen, there's a disconnect - I mean we know there's a crisis, and the disingenuousness of the whole thing is here's the same President that keeps saying that if we don't somehow figure out a way to shuffle out trillions of dollars in U.S. economy and money to fight global warming because it's going to get 1 degree warmer over the next hundred years, that we shouldn't worry about the deficit that continues - the clock never stops. It never stops moving. It is a crisis. It's an immediate crisis, and he should be honest about that.

DAGEN MCDOWELL: My favorite little, I guess gift to the President, was $100 million in new infrastructure spending that is in the budget, and they are freely raising new revenue through taxes in this budget. It's about one and a half trillion dollars in new tax revenue. That's on top of the $600 billion in higher taxes earlier this year. That's on top of the more than one trillion in Obamacare taxes. This is a blueprint for what the President wants and for what all Democrats want, which is higher taxes, more taxes, and they're going to spend until the bond market says, "Hold it, you can't spend and sell debt anymore."

CHARLIE GASPARINO: I just think it's fascinating the way he put a time stamp on this. Ten years, like ten years is way out in the future. I mean ten years comes pretty quick. I think what's scary about this, and again, the media lets him get away with it because they think Obama sounds smart, but when you strip down what he really says, it's actually pretty stupid. I mean there is a rationality for right now, we could still sell our debt because every place else is screwed up. But to suggest that ten years from now, we're going to have a problem and that's not coming in relative terms, tomorrow, is stupid. I mean you want to give the President respect - he's a bright guy, but his statement - stupid.

ADAM LASHINSKY: Actually, no I don't. And I don't think calling the President stupid is constructive. He said, and I think rightly so, that we shouldn't get so concerned that we have a problem tomorrow that we do something stupid. Instead, he's saying of course I agree and understand that we need to get this under control and we have time to do that. By the way, there's a difference between saying that the Senate Democratic budget calls for increased spending, which is true, which is what we're flashing on the screen, with saying that it won't attack the deficit, or the debt problem, which is not true. They project that it will reduce the debt, and so I don't think we're as far apart, and I don't mean "we" on the show, I mean the Democrats and Republicans in Congress are as far apart as we're making this out to be. For example, Congressman Ryan also calls for tax increases. You're talking about a time stamp; he's not talking about a time stamp.

DAGEN MCDOWELL: Absolutely! When you have OPEC mad at you because you're not using enough of its oil and you have Hollywood mad at you because you're using oil period and you're producing it. You know what? You only have to talk to the people of North Dakota. Lowest unemployment rate in the entire country at the end of the year, like 3.2 percent, and that is one of the biggest destinations for Americans as they're migrating around the country. Moving to North Dakota - it's because of that shale oil.

CHARLES PAYNE: Listen these people are nuts, these actors, not OPEC. Gas prices are exploding...we saw that this week in the CPI report, in the retail sales report. Just imagine if we could unlock all of the energy we have here. It's one of the things that are holding us back. The President and Jay Carney mentioned that this week as well that this Green Energy initiative is much more important than everyone watching this show having lower energy bills.

ADAM LASHINSKY: Oh, there's absolutely no question. In the span of just a few short years, we've gone from being very concerned about being dependent on OPEC, to being close to achieving energy independence in the U.S. and further more. No argument. The opening up of these vast North American reserves of natural gas and some oil has completely changed the equation. Of course, we should still pursue those policies though.

DAGEN MCDOWELL: This is actually private business and the free market at work because you have private industry that is exploring and producing this oil and then you also have the free market, gasoline prices are very high, but that is played into this because we've all begun to adjust. We're driving much more fuel efficient cars in this country, and we've pulled back demand. All of these vehicles are now much more fuel efficient.

CHARLES PAYNE: I cannot believe this is the same President who railed against the Patriot Act. Are you serious? When I heard the news, by the way, the ghost of Andrew Napolitano, even though he's still alive, just jumped into my body. I mean you talk about something that just sounds like it goes against everything Americans stand for. We have to draw the line in the sand.

DAGEN MCDOWELL: I think the FBI already has access to this; it's a database of suspicious financial transactions that all the banks are required to report. Sure, FBI, you should let the CIA and NSA do whatever the FBI does. I really actually don't have a problem with it if it does mean fighting terrorists.

CHARLIE GASPARINO: Look what happened to poor Eliot Spitzer, that's how he was caught. I mean, I feel so bad for Eliot Spitzer. He did see suspicious looking money transfers to a house of ill repute and was caught as the infamous client number nine with prostitutes. I will say this - there's so much that they can do already, but there's so much they do already. Why don't we have some hearings to figure out exactly what they want to do with this?

ADAM LASHINSKY: Well, I don't disagree with Charlie, we should have hearings, we should be thorough about it, we should do it well, but if I had to choose for example between this and water boarding, I would choose this in a heartbeat.