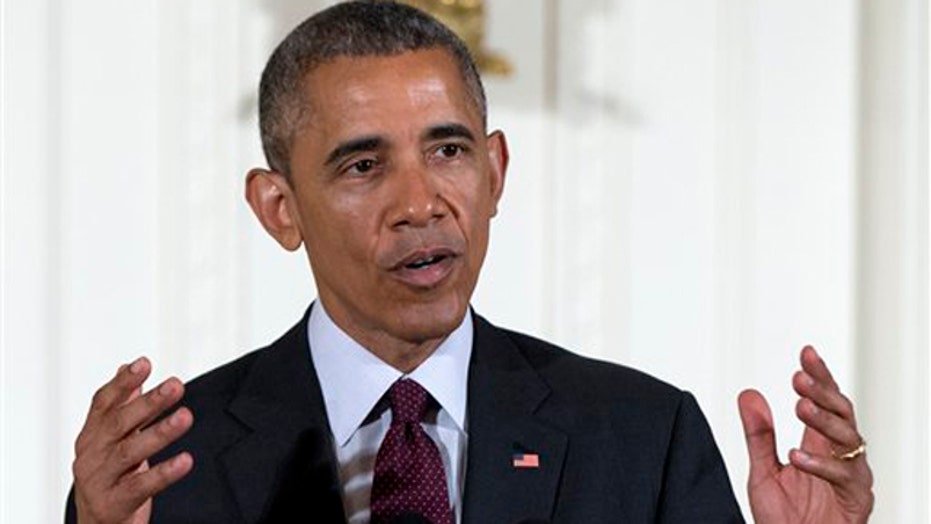 Obama claims US is 'most respected' again

Is the president right or wrong?

PRESIDENT: THE WORK WE DID HELPED MAKE US MOST RESPECTED COUNTRY ON EARTH

STEVE FORBES: Among our allies there is huge worry and no respect for his leadership. The Russians, Chinese, Iranians- all believe now the U.S. is a declining power, which is why the Chinese are hacking government files. Obama now polls under George W. Bush.

BRUCE JAPSEN: I think a poll we should consider is the low bar which was the Bush and Cheney administration. Those countries may not like us but they respect us. We have a Pacific trade deal that is going to benefit potentially 40 percent of the world’s economy. I think we’re doing pretty well.

RICH KARLGAARD: People do respect the U.S. but it has nothing to do with this administration.

ELIZABETH MACDONALD: This is not the immaculate recovery. The policy he has enacted has flat lined growth. The problem with the U.S. and administration is that it appears not serious (Cuba, Red Line comment). Respect is one thing, what we need is the U.S. to be the leading light of freedom and democracy and free market economies around the world.

SABRINA SCHAEFFER: This concept about respect is one about leadership. Is this someone who is principled and has a clear ideology and a clear sense about what he is doing as a leader.

JOHN TAMNY: We are the most respected nation on earth, not because of Obama or Bush. Despite our stumbles we are still viewed as the place where individuals can achieve.

JOHN TAMNY: We need private markets to do this. With the TSA when your practices don’t work you get more funding. When your employees do a lousy job, they are not fired for them. In the private markets we starved bad ideas. Imagine how much better and quicker airport security would be.

RICH KARLGAARD: If you want to privatize start with schools- security forces should be last. Do we want to have our police and military be run by people who are going to be tempted to cut costs to increase dividends?

STEVE FORBES: 4 percent failure rate in the private sector would get you canned.

SABRINA SCHAEFFER: This is a perfect example of why you don’t want a one-size fits all government program. We want this to be privatized so each airport is a laboratory to figure out what the best practices are.

BRUCE JAPSEN: My issue with the private companies is you still need to have the government involved. When the cronyism takes over- who gets the contracts- more government is involved in all of that… who knows who you are going to get to manage all these places.

ELIZABETH MACDONALD: I thought California is really taxed over there they are suffering from a drought and bankrupt cities. I would pay for an Uber ride for these guys right to the unemployment office so they can be arrested for public drunkenness under the same laws they write.

RICH KARLGAARD: They are going to use Uber and cabs, were talking about 60,000 a year for this service. It’s a good bargain.

BILL BALDWIN: I like the program but I want to see an enhancement. You should get a text alert when your congressman uses the service.

STEVE FORBES: Keep them off the road. I’m more worried about their fiscal drunkenness.