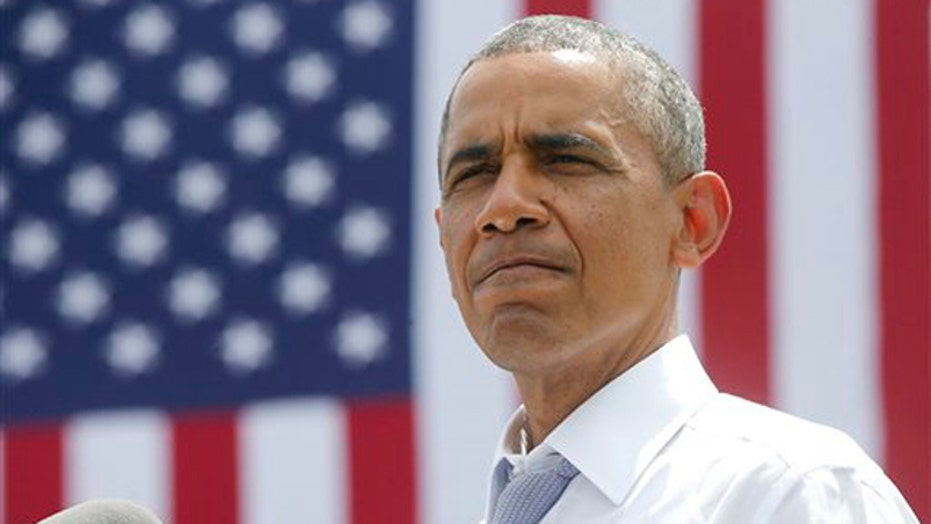 President says he will act alone on immigration crisis

This is a rush transcript from "Hannity," July 1, 2014. This copy may not be in its final form and may be updated.

PRESIDENT BARACK OBAMA: And today I'm beginning a new effort to fix as much of our immigration system as I can on my own, without Congress. As a first step, I'm directing the secretary of Homeland Security and the attorney general to move available and appropriate resources from our interior to our border.

SEAN HANNITY, HOST: Now, that was President Obama in the Rose Garden yesterday arrogantly announcing that he will use executive power to make major changes to the nation's immigration system. By the way, without Congress.  And he reportedly decided to take matters into his own hands after Speaker John Boehner told him that the House would not vote on comprehensive immigration legislation this year.

LOU DOBBS, FOX BUSINESS: That's what this president is doing. De facto amnesty is what he is creating. And what is the solution? If he does not secure the borders, I -- I mean, there is a rising backlash against this president for what he's created and his political -- his political exploitation of those tens of thousands of young people is utterly unconscionable! There will be consequences! And this president, I don't think, has thought this one out very clearly at all.

HERNANDEZ: It's not humane. I agree with you.

HANNITY: I didn't ask if you if it was not humane! You -- why don't you explain to people -- they -- they deport them immediately, they send them back, or they put them...

HERNANDEZ: It's worse than that.

HANNITY: Or they put them in jail, right?

HANNITY: OK. What is -- what would not be humane about saying to people, You didn't respect our laws and sovereignties, and give them a plane ride home? Why would that be a bad thing.

HERNANDEZ: Well, that's what we do.

HERNANDEZ: That's what we do.

HANNITY: We do not do that!

HERNANDEZ: ... if you'll remember, the last time you had me, you invited me on the show, actually, you came up with a proposal. And I said, where do I sign?

HANNITY: My proposal would secure the border!

HERNANDEZ: I agreed with you. You came up with a great proposal, and I said, there's a compromise. I didn't say I liked all of it.

HANNITY: All right, secure the border.

HERNANDEZ: Where are the compromises, the offers and counterproposals by both sides?

HERNANDEZ: The president is stuck because neither side will act.

HANNITY: Sheriff, there is -- one kid died today, or late yesterday.  You have all these kids. And I've got images of people crossing the Rio Grande! They're paying 100 bucks, and if they get one foot on American soil, they're staying here right now. Is that what you see going on in your state?

SHERIFF JOE ARPAIO, MARICOPA COUNTY, ARIZONA: Yes, it's unfortunate. You know, I went on your station three weeks ago when they dumped a thousand kids in the Greyhound bus terminal. You know what I said then?  This is calculated by the president to cause controversy...

ARPAIO: ... hope the Congress does something, and then do the executive order...

ARPAIO: ... which he did. So this is what it's all about. They can't control the border. And this is a game plan they're playing.

HANNITY: Sheriff, let me ask you a question...

HANNITY: Hang on! I got a question for the sheriff...

ARPAIO: Who disagrees with that?

HANNITY: If I had a bus full of illegal immigrants and I entered Arizona -- now, they were literally dumping busloads of people in Tucson and Phoenix, and I -- I was transporting illegal immigrants, would I be handcuffed, perp walk? Would my mugshot be all over TMZ?

HERNANDEZ: It's not the buses that are crossing...

HANNITY: I asked the sheriff!

HERNANDEZ: ... the border. I apologize.

HANNITY: Sheriff, if I did what they did...

HANNITY: Well, Francisco, a part of what we talked about was securing America's borders. So you support me that every inch of border ought to be secure, and those people that don't respect our laws and sovereignty ought not be left (sic) in. You agree with that, right?

HERNANDEZ: Look, even my biggest critic...

HERNANDEZ: Let me finish! Even my biggest critic, my Marine friend, Brian Johnson (ph), agrees with you that, yes, you actually offered measurable ways to secure the border. They are not ambiguous. And then you came up with three or four other proposals that were fine. We've been screaming for different reasons for the federal government to act for about 10 years.

HANNITY: But I want to know...

HERNANDEZ: Nothing happens in Congress.

HANNITY: You agree that the president's creating a humanitarian crisis where people are...

HERNANDEZ: No, I disagree.

HANNITY: You don't agree with that?

HERNANDEZ: I disagree. Because you're -- because there's nobody going to believe that the president is banking (ph) all these people come across...

HANNITY: Excuse me! That's not my point. If the president doesn't do his job and secure the border -- Arizona tried to do it on their own, and look what happened to Arizona. If they don't -- is there, Sheriff...

HANNITY: ... a humanitarian crisis at our border or not?

HERNANDEZ: The federal government -- yes, it is a crisis. We have to secure it. I agree with you, Mr. Hannity. Why are you arguing with me?

HANNITY: Sheriff, do you agree with that?

HERNANDEZ: I'm agreeing with your plan. The point of the matter is Congress is not doing anything. We've got the Republicans...

HERNANDEZ: They're not asking for amnesty.

HANNITY: Yes, they are.

HERNANDEZ: Both sides have to give up their sacred cow.

HANNITY: Is there a humanitarian crisis because the president fail to do his job?

ARPAIO: Yes, of course. This is planned. You know, let me tell you, I just wrote to the Homeland Security secretary again last night. Guess what? We have 3,500 people in jail that are there for all different crimes. We check them out. They're turned over to ICE, and guess what?  They keep coming back over and over again. Either they're let out the back door, or they're deported and they keep coming back. Forget just the kids.  This has been going on over and over again.

HERNANDEZ: You're still not addressing the point.

HANNITY: And coming up -- What are we going to do about it?

HANNITY: What are we going to do about it?

HERNANDEZ: What do we want to do about it?

HANNITY: The problem is, the president wants his amnesty bill! And if he doesn't get that, he says he's going to take...

HANNITY: He's going to borrow power, is what the Democrats say.

HANNITY: Marco Rubio doesn't support his bill because he thinks it's the wrong bill!

HERNANDEZ: Let's go with your proposal.

HANNITY: My proposal is secure the border first, then we'll talk about everything else...

HANNITY: Do it -- no, I never said that, never agreed to that.

HERNANDEZ: You can't say that all these people are coming over to get amnesty.

HANNITY: We have an obligation. Terrorists may cross that border one day and blow up an American city, Francisco!

HERNANDEZ: Mr. Hannity, you're intent on disagreeing with me when there's no disagreement.

HERNANDEZ: Let's move on it!