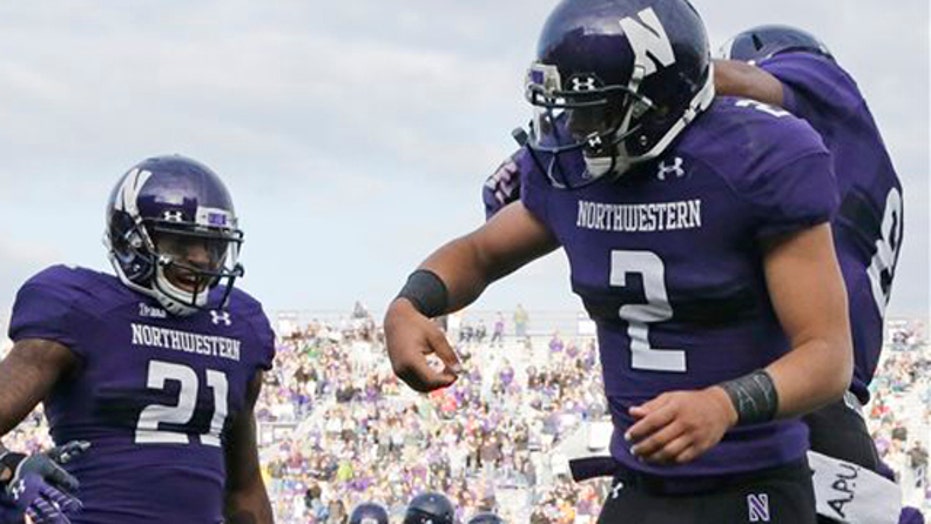 This is a rush transcript from "Hannity," March 27, 2014. This copy may not be in its final form and may be updated.

SEAN HANNITY, HOST: Northwestern University football players are claiming a huge victory today, this after the National Labor Relations Board ruled Wednesday the players there qualify as employees rather than student athletes, and as a result they're now eligible to unionize under federal law.

So what does that ruling mean for the future of college sports, and how will this impact the game? Here with reaction we have legendary college and pro football linebacker and current ESPN college analyst Chris Spielman, and former NFL Pro Bowl running back, the one and only Tiki Barber. He joins me in studio. What's up, man?

HANNITY: The Giants are making some good moves.

BARBER: You have to make moves, make sure the offensive line -- it was bad last year for Eli.

HANNITY: We've got to protect Eli.

HANNITY: This is fascinating. Universities make a fortune, especially off football, all right? Players, they get to unionize, do they get more than any college scholarship?

BARBER: Here's what's important about this ruling. It allows college football players right now -- because it's just Northwestern football players, but this could expand -- to have a seat at the table. You talk about the money that's made in the NCAA football program. It's enormous. It's a billion dollar business. Northwestern, the head coach Pat Fitzgerald makes $2.2 million and they're building a $220 million facility right now.

HANNITY: You want the players to have a piece of the action.

BARBER: Here is the thing. They may need a piece of the pie, but at the least, they need a seat at the table. By unionizing they get to sit at the table. And I think that's the most important thing that's going to come out of this.

HANNITY: All right. Chris? What do you think?

CHRIS SPIELMAN, ESPN COLLEGE FOOTBALL ANALYST: Sean, I think there could be some problems down the line if they do unionize. The one thing I'm concerned about in talking to some athletic directors, if you do unionize, you have to subsidize that union through moneys. Does that take away the ability to have nonrevenue sports give scholarships to other kids that otherwise, Sean, might not be able to go to school and get an education?

I do think medical costs should be helped out if a player is injured in the line of duty. I also believe in stipends for players. But I would put those stipends into a savings account where those kids then can take that savings account money and get off to a good start in life. But also there are athletes that need that money. A lot of them send it back to their homes.

HANNITY: Tiki is a little bit of an exception. How many years in the NFL?

BARBER: I played 10 years in the NFL.

HANNITY: The average is three-and-a-half.

BARBER: Three-and-a-half. It all depends on injuries, and that's really what we're talking about with this college unionization. They want a seat at the table so they can talk about medical care. It's the same things we're talking about in the NFL, concussions and catastrophic injuries that prevent you, workers comp issues, that prevent you from doing a regular job when you're done playing the game.

HANNITY: What about players? Universities are making all this money. You can argue, OK, they get a free college ride, but they're working really hard to get that college ride. Number two, maybe a small piece --

BARBER: Are they? Look at college basketball. How many of these kids are one and done now? There's a kind in high school now. There is a kid in high school right now, Jahil Okafor,who is going to Duke saying I wish they would lower the minimum age to get into NBA. He's not going to be there for four years.

HANNITY: Can you blame him? If you got four years because of the risk of injury, in the NFL four years to make a living supposed to last you the rest of your life? They don't have all of your TV skills.

BARBER: Here is why I don't blame them, and this is why I think they need a seat at the table, because right now, his brand will be exploited when he goes to Duke, right? He won't see any of that. They may sell a million jerseys -- I don't know maybe they won't. Say they sell a million jerseys, he will see zero revenue from that right now. I think what unionization allows them to do is start discussing these things. We've been talking about it forever.

HANNITY: How about a new car for every player?

BARBER: That can't work, because then the big programs win. The ones that have big boosters, that have the big budgets, they win.

HANNITY: Yankees win, Yankees get good players. You just told me you're a Yankee fan.

BARBER: A little big of a Yankee fan.

HANNITY: What do you think, Chris? We'll give you the last word.

SPIELMAN: There are ideas out there. I think what you're going to see eventually is the NCAA is going to make rules in place where players will be able to generate revenue through autograph shows or through and public appearances.

My whole point is, Sean, that you want to be able to have these kids make money, but put it in a savings account for them and let them collect on it after they graduate. That way everybody's playing on an even playing field.

HANNITY: That is actually a very reasonable, well-thought out position. And the medial part, compensation part's really happening.

BARBER: If you put that in a contract and make them graduate to get that.

HANNITY: By the way, I have to congratulate you. I just met your little baby. How old now?

HANNITY: She is adorable. I had her laughing.

BARBER: You said it. She must be a conservative, right?

HANNITY: Congratulations. All right, guys, good to see you.