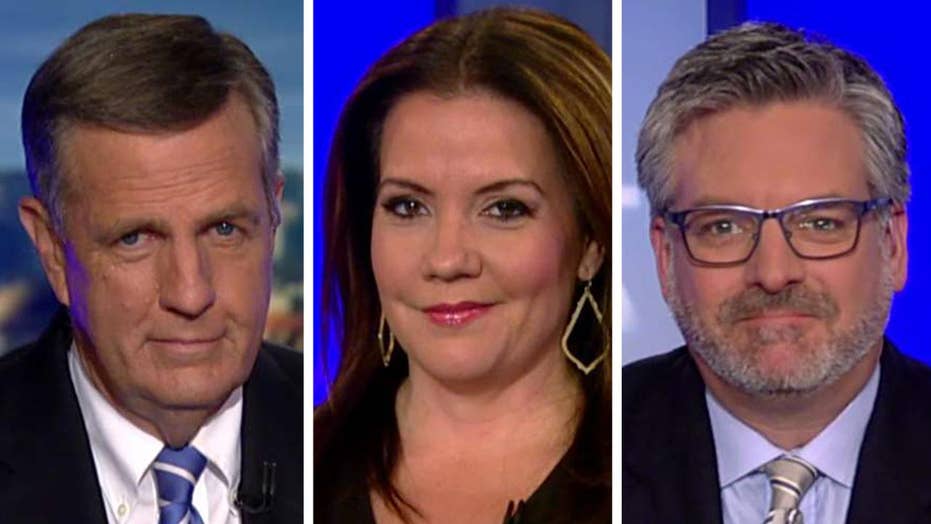 This is a rush transcript from "Special Report with Bret Baier," September 11, 2017. This copy may not be in its final form and may be updated.

THEN-PRESIDENT GEORGE W. BUSH: I can hear you. The rest of the world hears you.

PRESIDENT DONALD TRUMP: We are making plain to these savage killers that there is no dark corner beyond our reach, no sanctuary beyond our grasp, and nowhere to hide anywhere.

DEFENSE SECRETARY JIM MATTIS: We Americans are not made of cotton candy. We are not intimidated by our enemies. And Mr. President, your military does not scare.

BRET BAIER, ANCHOR: Some of the sights and sounds from 9/11 16 years later. Now the terrorist threat, the threat overall has evolved, but it's still out there. We talked about it tonight with this CIA director, Mike Pompeo.

Let's talk about this with our panel: Brit Hume, Fox News senior political analyst; Steve Hayes, editor in chief of The Weekly Standard; Mollie Hemingway, senior editor at The Federalist, and Michael Crowley, senior foreign affairs correspondent for Politico. Steve, a lot of bullet points from Pompeo that were newsworthy.

STEVE HAYES, THE WEEKLY STANDARD: Yes, I would say that was an incredibly meaty interview with a public official who doesn't give many interviews at all. Among the things that struck me most were his news that we would be seeing the rest of the documents that were captured in the raid on the Usama bin Laden compound in May of 2011. That something, as you pointed out with him that you've been talking about it, we've been covering a lot at The Weekly Standard.

What it's done just in that little glimpse of these documents that we've seen is give us an understanding of the enemy we are fighting and that we've been fighting for the past 16 years. I think these documents will provide a much deeper look at that. It will allow not only intelligence analysts but the American public to better appreciate and understand how they have adapted to the fight that we've been engaged in the past 16 years.

CIA DIRECTOR MICHAEL POMPEO: I think it's excellent news to see the world united against North Korea and the threat it poses. It's not just a threat to the United States. It's a threat to Japan and to South Korea and to China and Russia. To see the Chinese and the Russians having gathered around this U.N. Security Council resolution is a good thing. I now hope they will enforce it. I hope the Chinese and the Russians will do what they have committed to do in this resolution.

BAIER: This resolution was watered down a bit to try to get China and Russia on board. Your thoughts?

BRIT HUME, FOX NEWS: We don't think we are near the full range of sanctions that could be imposed, even if they were all enforced. But we seem to me moving in that direction and it is obviously encouraging that China and Russia are willing to go along at least to some extent with the imposition of these sanctions.

The question of course at the end of the day is, will North Korea buckle under sanctions? They are now about the most sanctioned country on earth, and they continue their forward march toward a nuclear arsenal. So the question arises, can that be stopped with sanctions? We don't really know because the full range of sanctions has yet to be imposed, but I think it's an indispensable first step before you try to consider what else you would do. And of course when you stop talking about sanctions, the other options are pretty narrow.

MICHAEL CROWLEY, POLITICO: It's an important step. We have been covering the same story, it feels like groundhog day now, for several years. The North Koreans test some kind of weapon. The Security Council convenes, there is this stirring rhetoric. There's a declaration that now we're finally cracking down, and their behavior never seems to change. It's a very ominous pattern. You have to do this, but the North Koreans are showing that they are survivors. They're willing to persevere. Someone said the other day they're willing to eat grass if that's what it takes to keep this nuclear program going.

I think the key question now of course on the farther horizon is the question of whether we are going to have a use of military force. The near-term question is will we, the U.S., maybe some of our allies, start to sanction Chinese financial entities that do business with North Korea and risk some kind of rupture with our very important economic relationship with China which can reverberate at all kinds of dangerous rays for our economy and for the world economy. And the more we see these U.N. votes that don't change North Korean behavior, the closer we get to that pretty tricky scenario.

BAIER: Other nuggets in here, he wouldn't say it directly about interaction between North Korea and Iran, but then rephrased, kind of said it would make sense that Iran and North Korea would be working together on technology and North Korea could be selling things to buyers, including Iran.

MOLLIE HEMINGWAY, THE FEDERALIST: Right, and that might explain why the attempt at denuclearization is still in play. This idea that you can't contain North Korea, they really do have nuclear power or they are on the precipice. So why not just admit it and move on? Partly because they will not be able to be contained. They will share this information with North Korea, which is why sanctions need to be stepped up.

It is very good to have this deal that brings along the Russians and the Chinese, the Chinese in particular who do so much trading with North Korea. But in order for sanctions to work they have to hurt, and North Korea is very effective at predicting the hurt of sanctions and stopping up in response. And unless we actually target well, it's not going to be very effective. And so this is a good first step. The pressure needs to keep being applied lest we go to war.

BAIER: We are going to post all of it on the website. But here's a part we didn't air about American hostages around the world, specifically Taliban and the Haqqani Network in Afghanistan, Pakistan.

BAIER: You mentioned the Taliban and the Haqqani Network. There are apparently five American hostages in either one of those. Any update on those?

POMPEO: I don't have anything I can share with you today other than I brief the president almost every day on intelligence matters. I came here straight from the White House. We talked about this a lot, and the president is very focused on securing the release of all the hostages that are being held in different places, not just in Pakistan but in Syria and Iran and other places around the world as well.

BAIER: We don't cover that side enough, how many Americans are being held around the world.

HAYES: Right. It's an interesting dilemma and I think the reality of it will likely complicate the U.S. approach to Afghanistan. One of the things that we've heard from Rex Tillerson repeatedly since the president made his speech on Afghanistan was that the end goal of the administration's approach to Afghanistan would be negotiations with the Taliban. I think we are going to learn in part because we will see more of these bin Laden documents that it's virtually impossible to separate senior Taliban leadership and the Haqqani Network and others from Al Qaeda, from the Al Qaeda we've been fighting, which makes it a much, much more difficult task, I think an impossible one, to sit down with the Taliban and try to separate them.

HUME: I remember I was sitting on that day basically where you are sitting right now throughout much of the day, doing the Washington end of the news anchoring. It was one of those days when you saw the second plane hit and you immediately knew that the first one was no accident. The second one obviously not as well. Things were not going to be the same in America. The world we woke up to had changed, or it may already have changed, but we didn't know it. But we knew it then.

And here we are 16 years on now, and we are still engaged in this struggle. It's a long way from over, but it is notable, as you pointed out, that the threat has evolved. It's evolved because in many respects it has weakened. They have not succeeded in mounting the kind of big operation against our country that the terrorists succeeded in mounting that day. There are smaller attacks and there are attacks in other parts of the world, but we have hardened ourselves as a target in meaningful ways. And that is something to be grateful for as we remember those who died on that hideous day 16 years ago.