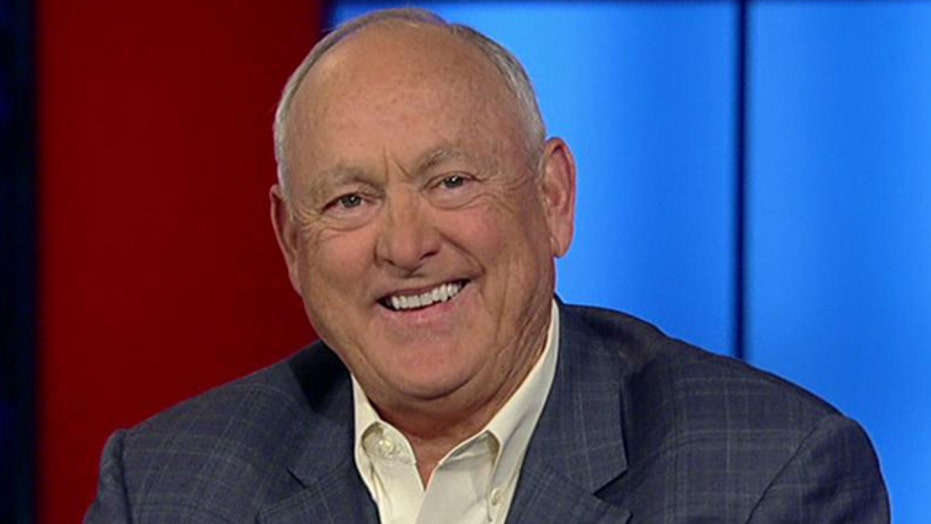 This is a rush transcript from "Hannity," May 9, 2014. This copy may not be in its final form and may be updated.

SEAN HANNITY, HOST OF "HANNITY": Welcome back to "Hannity". He was a pitching legend for more than 25 years, and now Nolan Ryan is the author of a perfect book for summer. It's "The Nolan Ryan Beef and Barbecue Cookbook Recipes from a Texan Kitchen." And he sat down with me earlier. Take a look.

HANNITY: And joining us now is one of the best pitchers of baseball all time history. As a matter of fact, the strike out leader, 5,714. Nolan Ryan, how are you, sir?

HANNITY: You don't know this, but I was a big fan of yours. You were with the New York Mets in ‘69 when you won the World Series. Tom Seaver, Jerry Guzman, Ray Sadecki, Ed Kranepool, Bud Harrelson, Boswell at second, Wayne Garrett, Donn Clendenon was on the team, and Cleon Jones, and who was in center field -- Tommy Agee. I loved sports as a kid. And then you become an owner. How do you do that?

RYAN: I don't know. That's something I never thought I would be. That was one of those special years. It was a special team that all came together.

HANNITY: It really was a miracle. Tug McGraw, the backup.

RYAN: When I look back on that I feel very fortunate that I was on that team and that it happened in New York, because it was the first time after the Dodgers had left and Giants had left that a national league team had come in and won a World Series. So it was really special.

HANNITY: I was happy for you. Were you aware how often when you were winning the series, a couple years back, right?

RYAN: In 2011 we played in the World Series with the Rangers.

HANNITY: They go to you every day. You're there every day, every game. I saw you roll your eyes a couple times.

RYAN: Some of the games were heartbreaking.

RYAN: It was. It's kind of like watching your kids play. There is nothing you can do. You agonize over it and worry about it. But you're a spectator.

So I get a hold of your new book. I'm looking at it, and everything in here is my favorite food. So you and I share a passion for beef and barbecue. And this is all I really eat. I eat a lot of steak, a lot of red meat, a lot of beef, a lot of barbeque. And I love it all. I like to say I'm a connoisseur of all. How did you put this together?

RYAN: We have a big company, and what happened was we'd get customers would email us want to know, they purchased and produced and they wanted to know how to prepare it, and do we have any recipes, and what they should and shouldn't do. It got us thinking about it, and we thought the grilling season is coming up. Let's give them something they can look at, something that they can do in a timely manner that you can get ingredients in a supermarket and not to try to figure out what it is, and something that's quick and has a lot of flavor to it.

HANNITY: One of the things I love to do is grill steaks. I keep it really simple but it tastes really great. What is your favorite steak?

RYAN: If I'm grilling it's a T-bone, and if I'm eating out at a fine restaurant it's fillet.

HANNITY: I never order a fillet.

RYAN: Rib eyes are so popular in Texas. That's probably the number one seller.

HANNITY: I like rib eye and T-bone. You can never go wrong. You get a taste of fillet and a sirloin. Do you cook all these things yourself? I just met your wife, and she rolled her eyes at the notion you're cooking this.

RYAN: No. I grill. I do like to grill. But I'm like you. I grill what I like. And I look forward to it and enjoy simple flavors. And so that is pretty my approach to it.

HANNITY: Yes. That and pork ribs you can't beat.

RYAN: I agree with it. I really like pork ribs and it's something we always look forward to when we went to Cincinnati.

HANNITY: Nolan, love it. It's an honor to meet you.

RYAN: Thank you for having me on. And enjoy your grilling season.

HANNITY: I'm going to. I appreciate it. Thank you.