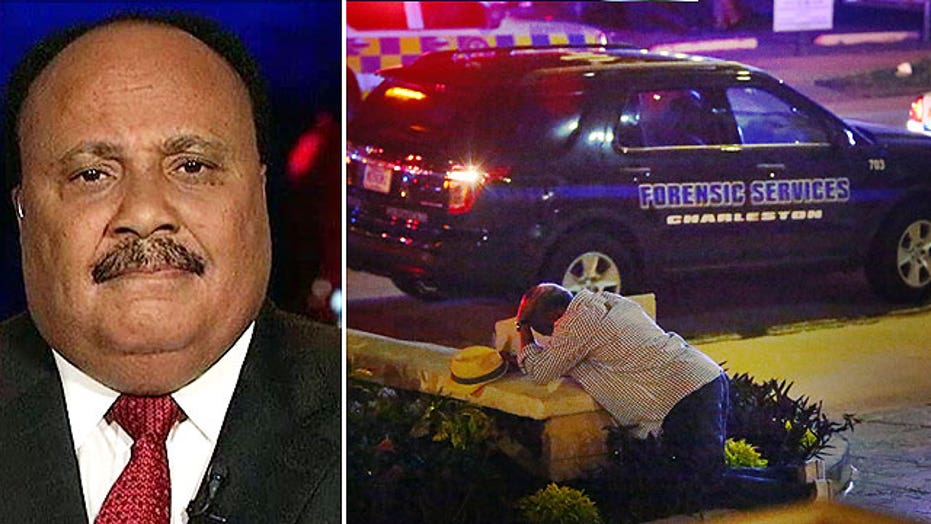 O'REILLY: Continuing now with our lead story, nine innocent people shot dead in South Carolina church by apparent white racist. Joining us from Atlanta Martin Luther King III. I wanted you to lead the program tonight because you are emotionally involved with this story. Almost 41 years ago to the day your grandmother, Alberta King, was shot dead in a church in Atlanta. Your father preached at the Emanuel Church that was desecrated last night by Roof, and your mother also led demonstrations from that church.

With all that in play, what is your feeling tonight?

MARTIN LUTHER KING III, GLOBAL HUMAN RIGHTS ACTIVIST: Well, I certainly, first, want to say my prayers and condolences are with the family members of all of these individuals that were tragically gunned down.

And as you said, my first, immediate response was oh my goodness, not again because my second thought went back to 1974 when my grandmother was gunned down. And if one cannot be safe in the sanctity of their places of worship, what has our society come to?

Now, the reality, unfortunately is, from time to time, we have seen these tragic incidents. In 1963, four little girls lost their lives in a bombing church in Birmingham, Alabama. And over the last few years, over the years from time to time, there have been church bombings, individuals have been hurt. So, it is unfortunately not something new, but what I would hope is we -- we must find a way to examine our nation in a different way.

At the end of the day, what we saw today was black and white and young and old and maybe wealthy and poor people coming together in the state of South Carolina. And it should not take a tragedy where people lose their lives for people to come together. We must find ways to come together more often.

O'REILLY: But even if we do, Mr. King, it's not going to stop the psychotics among us from doing what they do. Your grandmother was killed by a black man --

O'REILLY: -- who said I want to kill Christians. and slain your innocent grandmother, who was sitting at a church organ. So what I'm trying to get across tonight to everybody in my talking points and commentary is that this kind of atrocity, a terrorist act should unite Americans as 9/11 did -- all right. We should understand that evil is among us.

But there is no amount of legislation that is going to stop that evil, all right? Psychotic individuals are going to continue to do evil deeds no matter what the government does. However, you are right in the mind set of Americans, we have to stop this us against them mentality which we are seeing now I think more than we have seen in the past three or four decades.

KING: Well, I certainly think that's true. But the other thing is I also think that we have accepted or some have accepted a climate, in fact, of violence. What I mean by that if you look at video games, our children play video games and seven out of 10 of them are violent. Some of our movies are very violent and we want to see more and more violence.

My point is if we are socialized around all of these things and certainly we have the right to be, but the question is should Americans demand something else, a different kind of program --

O'REILLY: You're raising an interesting point because the initial report about this Roof guy is that he was deeply involved with these games on the Internet. But, as you know, we can't censor things here in America. I mean these forms of entertainment are going to -- you are absolutely right, there is no push back on it. There is no saying maybe that's not a good thing to devote your leisure time to violent pursuits even if they are fantasy. Maybe that's not a good thing to deride people of the opposite color of another color, because that's done all the time. And both sides do it.

But we don't have any peer pressure, it doesn't seem to me, to stop it against it. You're absolutely right, we accept it far too easily.

KING: Yes, well, what I was essentially saying is because we have accepted this culture of violence, it would be wonderful if we learned and accepted and created a culture of nonviolence. That -- now certainly many Americans operate that way every day. But, if we as a society said we were committed, we as a nation want to create the climate -- my dad called it and my mom the beloved community. We are nowhere near there but I just believe that one day we can get there.

O'REILLY: You know, it's a theoretical play you are making tonight. But it's a worthy one. It is something that people should say look, you know what? Even if this stuff isn't damaging, the games and all of that, we really should keep an eye on it.

And, you know, these snuff movies and all of this torture stuff. I have said for years that I just think it's desensitizing us. A troubled psychotic young man like Roof, you know, he just said -- look, he basically committed suicide, Mr. King. That's what he did. He wanted to take as many people as he could with him. He is a sick guy. But I don't want it to be politicized.

You are absolutely right. We should try to change our mind set in America. Thank you.