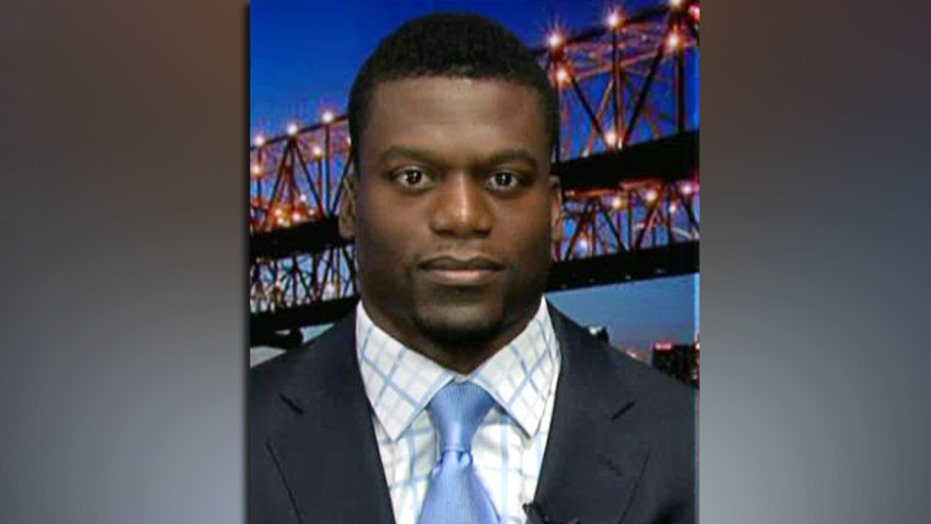 New Orleans Saints tight end Benjamin Watson, who turned heads with his thoughts on Ferguson, believes there will be another Baltimore-style riot in more cities to come if we don't address the problems facing the nation. #BaltimoreRiots

This is a rush transcript from "On the Record," April 29, 2015. This copy may not be in its final form and may be updated.

GRETA VAN SUSTEREN, FOX NEWS HOST: Right now, we are joined by NFL player, Benjamin Watson, who wrote a Facebook post about Baltimore that is now going viral saying, quote, "We have major problems as a nation. Yesterday, Ferguson burned. Tonight, Baltimore burns. Tomorrow, it will be another city in our homeland."

He joins us. Benjamin, nice to see you. And I'm just telling viewers that on the other side of their screen is live picture in New York. But let me go to you, Benjamin. Benjamin, I hope tomorrow you aren't making a post about New York City as we look at this trouble.

BENJAMIN WATSON, NEW ORLEANS SAINTS: I hope to not as well, Greta. It's been very disheartening really the last year or so, a year and a half. The events that have continued to happen really are making us really turn in as a country and see what's going on. I mean there are so many issues that we have to address. And this is just the latest and hopefully the last of these types of events that we'll see.

VAN SUSTEREN: You know, when you watch your post go viral though, you realize, you know, "Well, what a great thing," because your message is getting out there and it's a great message.

VAN SUSTEREN: You know, Ben, we should have taken your message after Ferguson. You know, maybe if a lot of the communities had, you know -- they've taken your message to heart, then a little bit more and focused on some of the bigger problems that we have, you know, unfortunately. So we have to -- we go through these different episodes where now we watch Baltimore two nights ago was burning, a senior center.

VAN SUSTEREN: A senior center was burned, and you know, now, tonight, a very tensed situation. You know, what's it going to take for all of us to sort of sit down and really work on these problems?

WATSON: Well, first of all, I think that there is great hope. And I said, you know, the gospel gives us hope and it gives mankind hope. But I've seen people join together. I've seen pastors in these communities. I've seen community leaders join hands. I've seen and heard myself from people who are in the police force, who aren't -- who don't have these same feelings, who aren't a part of the brutality, who want those things to change. So while it may seem when we are watching it on TV and away from it that there's nothing happening -- nothing positive happening, I'm encouraged that there really are people out there who are trying to make a change. And as soon as we understand that we all have the susceptibility to do these things and we address our sin problem, I believe we will be able to move forward as a country.

VAN SUSTEREN: You know, you as an NFL player and been such a good role model on this, do you have any idea how far this last post has gotten the reach of it?

VAN SUSTEREN: But you know, it is a little bit because, you know, all the message you are trying to get out there in order to get it out there the post has got to get out.

WATSON: It does. It does. But you know what? I think God does a lot of things in different ways. And the post isn't about me and about me writing, but I really think that there are people hurting and people are looking for answers. And we tried so many different things for answers and it seems like we keep coming back to the same thing over and over again and people are looking for something else.

VAN SUSTEREN: And as we look at these pictures, I don't know if you can see the scene in New York.

VAN SUSTEREN: You know, it -- I don't know what's going to happen here as the minutes go on. And of course, Baltimore has a curfew at 10 o'clock, which may put a little bit of a lid on things. At least the community seems to be pulling together there, but there is always a nervousness that something is going to happen.

WATSON: Definitely. There always is. And we said it before there is no excuse ever for law-breaking. When someone mistreats you, the correct reaction is not to go out and do something to destroy somebody else's property. But hopefully, the protests will be peaceful. Hopefully, the message will get out. Hopefully, we will see change and we won't be sitting here again in another week or so with another incident like this.

VAN SUSTEREN: It's always nice to talk to you, Benjamin. Next time, lets do -- let's talk football next time, let's hope with a different topic.

WATSON: Please. Can we?

VAN SUSTEREN: I know. We will.

WATSON: And I know you like your Packers, right?

WATSON: There you go.

VAN SUSTEREN: Anyway, nice to talk to you. Thank you.

WATSON: Good to talk to you, too, Greta. Thank you.