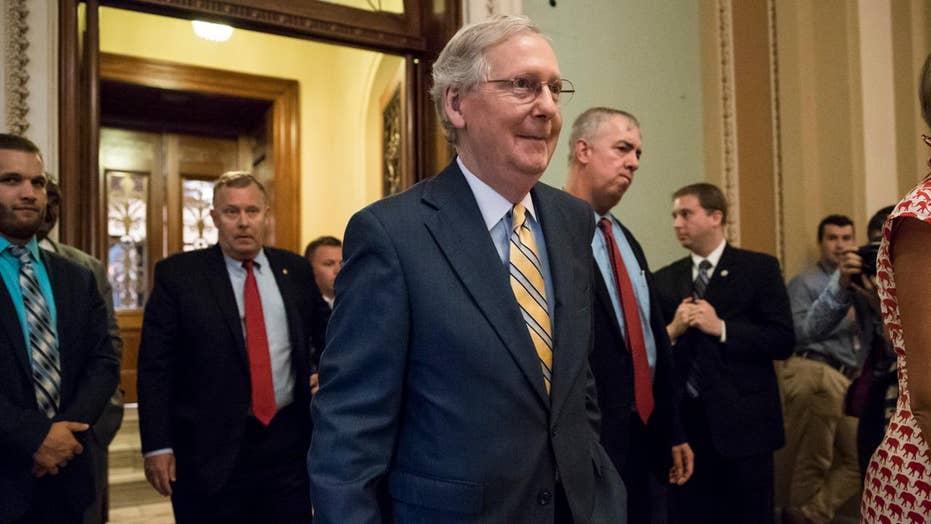 Kennedy: Perhaps there's a correlation between Republicans buckling on getting some of those taxes out of Obamacare, which make it implicitly ObamaCare, the fact that you're arbitrarily raising taxes on certain Americans forcing them to pay for healthcare. So what's going to happen when we have some of those really tough conversations? And this is where republicans are hoping for some bipartisan support on tax reform. I don't think this is a good sign.

Ben Stein: This program is not going to be killed, and is going to grow. I respect Rand Paul, I respect Senator Lee very much, but it is going to grow. I am in favor of taxes on the rich. I think the corporate income tax cut, that is got to go through, that is vital, that is basic economics, it's a sin that's it's been in there that long. If Mr. Trump cannot get rid of that, or else drastically cut it, we are in real trouble.

Adam Lashinsky: There are expensive things in this bill, for example the tens of billions of dollars to fight the opioid crisis costs money. This is a perfect test case, or case study, of how we govern. This is a huge problem; we know that money can go to help people, that's what the federal government is supposed to do. I don't know what the right number is, and I also don't know exactly how to raise the money, but this looks like a plausible way to do it.

Gary Kaltbaum: I believe big expectations have been built in since Nov. 9, and it's by no accident that markets have lifted off. Look, the biggest problem we have here is Republicans are afraid of their own shadow, they are afraid of the words “tax cuts for the rich,” because the left is driving that baby to the hoop. But the bottom line is they shouldn't be worried. We have nobody fighting for causes like me, and that's less government and more money in people's pockets.

Joe Piscopo: The red flags are all over this now, and I only go by my wonderful radio audience, you know they feed me, they tell me they're just not happy. Why did they take this long to come up with Obamacare? And now the red flags for this tax cut is just not gonna happen, you know it's not going to happen. Settle it, because now they're going out and they took too long. This tax cut, and I hope I'm wrong, it just doesn't look good.

ICE Acting Director: Sanctuary Cities Making it Dangerous for Agents to Do Their Job

Gary Kaltbaum: You have somebody that comes here illegally, then commits an illegal act, and the people that are supposed to enforce laws are blocked from enforcing them creating safety problems, and all it takes is one of these bad guys to do something bad like what happened with Kate and we now have Kate's law. It is just absolutely insane; somebody's got to force the issue, and sometimes money talks.

Kennedy: Not every immigrant is the person who killed Kate Steinle and we have to be really careful about that. But, you know, there's such a disconnect between federal law and some of these cities, but as you brought up earlier, wouldn't it be great if there was a city where you were shielded from paying any sort of federal tax? I think that we've got an emotional argument that has lost all practicality and focus.

Ben Stein: I think the idea of sanctuary cities is an outrage, that privilege, or that responsibility and that power, in terms of regulating immigration and citizenship, is clearly, unequivocally left to Congress and to the president of the United States. It has no place in the cities and local municipalities.

Joe Piscopo: We always do everything for everybody on the outside. Somebody on the outside commits a crime, they go in and they're protected, but we don't even give the American criminals the rights to go in? It's not right; on the other hand, do you disrupt families? And you can get deeper into the discussion about immigration control. New Jersey may become a sanctuary state.

Adam Lashinsky: Sanctuary actually is a very American concept, so I took issue with him saying this is un-American. I'm thinking about the Underground Railroad, I'm talking about us taking in refugees from Hitler. It is an American concept, it's also emotional, and it's complicated. We shouldn't try and just make it black and white.

Joe Piscopo: I can't understand it, you know, because you've got to do it right from the offset. $400 million this guy's going make? That's outta my league, I can't even identify with it.

Kennedy: ESPN is now reporting it's closer to 30 million in liens, but he filed some fancy pants, he some foot work here, a little defense, Floyd Mayweather, what he's known for, and so he gets to defer that bill until after the fight.

Adam Lashinsky: They're focused on their careers being celebrities, not on managing their money. They should be watching our show, obviously, every Saturday morning.

Gary Kaltbaum: These people think they're omnipotent because they're celebrities, and they just get out of hand. And this is not the first person, Mayweather, it's been going back many, many years. It's bad management, bad spending, and you end up in this situation.

Ben Stein: Hollywood and sporting world are full of big, very well paid babies and they don't have the ability to plan like adults, that's it.