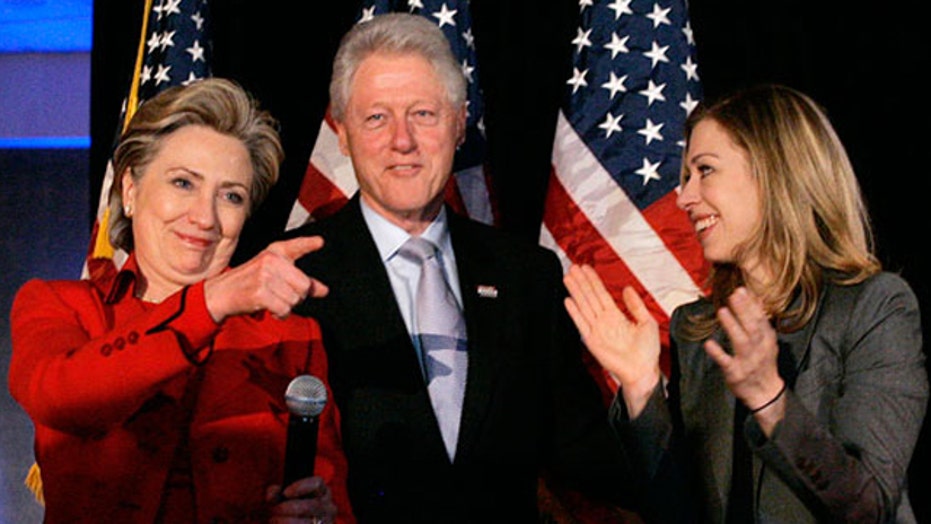 This is a rush transcript from "The Kelly File," July 21, 2014. This copy may not be in its final form and may be updated.

MEGYN KELLY, HOST: First on "The Kelly File," with Hillary Clinton increasingly looking like a possible contender for 2016 -- you think? -- there's a new book on the former first lady her family and her potential run including a whole section on how Chelsea Clinton may threaten her mother's bid for the White House and whether her husband, Bill, may prove to be more of a hindrance than a help.

So, what can we expect from the Clintons over the next two years? "Clinton, Inc." author and Weekly Standard Online Editor Daniel Halper joins us now.

So, Daniel, your book is getting praise from even places like the Daily Beast which says, "Unlike scandalmonger Ed Klein's fantastic number one best-selling narrative" -- so you can see they didn't like that one -- "Halper's study is juicy and gossipy yet scrupulously research drawing on numerous on-the-record conversations with prominent Dems and Clinton insiders."

They think it is meticulously researched and you go onto conclude essentially that Bill Clinton is not a good person.

DANIEL HALPER, AUTHOR OF "CLINTON, INC.": Well, thanks for having me, first of all. That's a little bit extreme. But I tried to understand who Bill and Hillary Clinton are. I think on the one hand Hillary's often portrayed as cold and calculating while Bill was sort of a motive and this bubba-like figure. I found that the opposite is closer to being the case.

So, Bill tends to be more cold and more calculating while Hillary tends to have long-time friends and have actual relationships and is sort of a more complicated figure.

KELLY: You say one of the, sort of, the biggest lies about the Clintons is that she considered divorce after the Lewinsky affair. You said divorce was never considered and that turned out to be a very great moment for her politically.

HALPER: Right. Scandal -- this book is about how the Clintons arose from scandal and impeachment to where they are today, getting ready for the 2016 election. So, Hillary Clinton is embarrassed on the national stage. And she is essentially then says, OK, screw it. I'm going to go and take care of my own career. And I'm going to run for Senate. And she does so. She's liberated.

KELLY: And you write about Chuck Schumer didn't like her in New York at all.

HALPER: The Kennedy's didn't like her and Chuck Schumer work against her in the 2000 election and spoke to his opponent -- to her opponent, her Republican opponent and gave him tips, private information that could only benefit him in the campaign.

KELLY: So, all those people are on the Clintons' you know what list because they didn't -- they got on her bad side and she got on theirs.

But let me ask you this, because one of the most interesting things in here is that you write about the supposed deal but the Clintons struck with Barack Obama. Tell us.

HALPER: Right. So, both President Obama and President Clinton and Hillary Clinton realized that they have mutual beneficial relationship. They realize that each one can help the other one. Interestingly enough it's changed drastically. In 2008 for instance John McCain told me that he was on the sly talking to Bill Clinton. He was getting advice on his campaign from Bill Clinton, essentially.

Now, I started digging in deeper with McCain and I said, was this advice, and he said, well, maybe not advice. But they were talking about the state of the race and what voters wanted to hear. And it sounded a lot like advice to me.

HALPER: Yes, I think there's an implicit agreement that each one will help the other as much as they can.

KELLY: And you are not expecting then Barack Obama to come out in favor of Joe Biden candidacy?

HALPER: I don't think President Obama thinks that Joe Biden is the best to take care of his legacy going forward.

KELLY: I want to ask you about a couple more things including Chelsea Clinton, because you say she's the real CEO of her parent's empire, we need to watch her. And you say -- you talk about your interview with the Clinton mistresses. And there was breaking news on one of those ladies moments ago. Standby.

HALPER: I think Chelsea Clinton poses major problems. She is effectively running the operations as I report in my book. And a lot of aides are concerned that she doesn't really know what she's doing and that she poses major risks --

KELLY: And yet they're doing that? They're deferring to her?

HALPER: I don't think they're deferring to her. I think she's taking control. And I think it poses major problems.

KELLY: What is this about Hillary's enthusiastic pot use? When was that?

HALPER: In law school. People who knew her then said she was enthusiastic pot smoker and possibly into other substances.

KELLY: But did she inhale?

HALPER: I believe she enthusiastically and joyfully inhaled.

KELLY: So, you got some on the record sources on all of this. It's not all off the record.

On the mistress front there was a report from Breitbart -- it's actually from a new Ron Kessler book --saying that Bill Clinton allegedly had some affair partner who they call the energizer bunny with whom he is still seeing, unconfirmed. Whatever. Did you interview any of these?

HALPER: I interviewed some. And I can tell you aides told me that they had to advise Bill Clinton in the 2008 election not to bring his mistress on the campaign trail. So he is still engaging in reckless behavior.

KELLY: Clinton aides told you that?

HALPER: Yes. And he's still engaging in reckless behavior and it threatens Hillary's 2016 run, as you can imagine.

KELLY: I'm going to imagine that the Clintons decline to speak with Daniel for this book and deny these allegations.