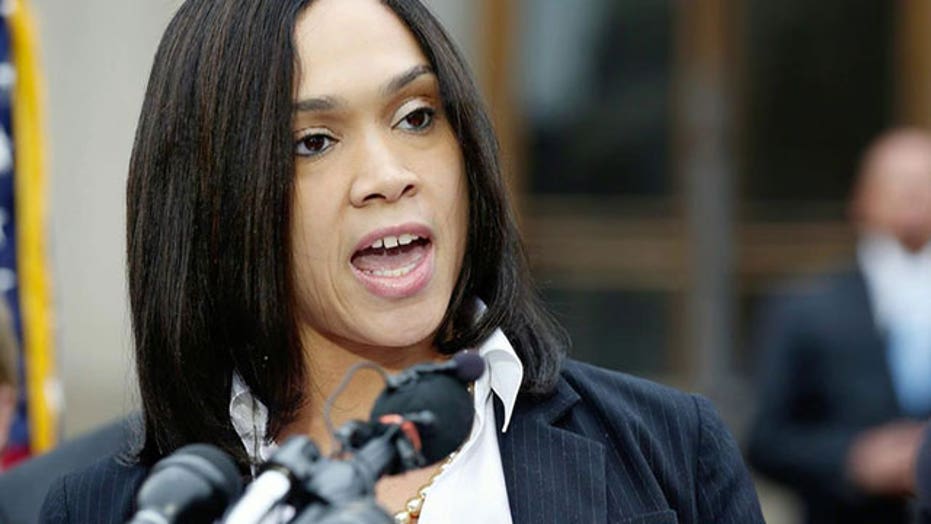 This is a rush transcript from "The Kelly File," May 27, 2015. This copy may not be in its final form and may be updated.

MEGYN KELLY, HOST: Just hours ago, lawyers for the six cops charged in the death of Freddie Gray filed a motion asking that this trial be moved outside of the city of Baltimore. The defense says the officers, quote, "cannot receive a fair and impartial trial in this city." And one of their primary complaints? This attorney. The D.A., Marilyn Mosby. They argue that she has an anti-cop bias, that she has prejudiced this case with some of her very public statements and that she should recuse herself in the interest of justice.

Among the moments earning her criticism, these remarks at a Baltimore church -- these are separate from the ones we've been showing you -- in the days before the initial investigation was even complete.

MARILYN MOSBY, BALTIMORE CITY STATE'S ATTORNEY: The criminal justice system that has historically and disproportionately affected so many communities of color and what we're seeing right now when we turn on the news and we open up the newspaper is that frustration.

So we will pursue justice by any and all means necessary.

Our young people, I know that they're called thugs. Those are young people crying out. There's a sense of hopelessness in this city. And there's nobody that can touch them the way that you all can.

And I can't do that in my capacity right now, but I know that you all have the ability of doing it.

We have work to do. We need to get out there on the streets and talk to these young people. They are not thugs.

KELLY: Judge Andrew Napolitano is our Fox News senior judicial analyst, he is with us tonight. And we knew it would happen and sure enough it did. She is now exhibit number one.

KELLY: In the defense motion to get this case kicked out of Baltimore, to get her off of this case and they're pushing back on her request to shut them up after she made these comments, not to mention, the other ones we've been playing about. This is our moment, she tried to shut them up and the defense has come out both guns blazing tonight.

NAPOLITANO: All right. There's a couple of problems here. One is the civil unrest that occurred makes it unlikely that the police officers could get a fair trial in the city of Baltimore, even if Mother Teresa were the prosecutor. But instead you have a prosecutor who acts and sounds like she's a political candidate for office, not an office involving the administration of justice, but an office involving the administration of the government.

KELLY: Like she is running for office. She's got an agenda.

NAPOLITANO: That's exactly what she sounded like in the clips you just ran. And language like that, though not unlawful and protected by the First Amendment, has the insidious and deep-seeded effect of affecting the potential jurors and causing them to believe that the defendants are probably guilty.

KELLY: Because if it gets moved to another county, she is still the prosecutor.

KELLY: But she appears to be a problem. I mean, schooled and learned lawyers in the state of Baltimore are coming out using the word disbarment for this type of behavior when it comes to a D.A.

NAPOLITANO: I haven't seen anything that rises to disbarment, which means taking her license away forever. But I have seen behavior which would cause me -- were I the judge in this case rather than a commentator here in New York City -- were I the judge in this case, I would seriously question her competence to try the case in a fair manner. Because her goal is not conviction, her goal is justice. Her goal is justice on the correct outcome on the basis of evidence.

So her efforts to silence them while she is herself on a campaign soap box are making it impossible for the judge even to address this issue. This is fair game. Fair game at her and fair game for defense counsel to say whatever they want about the case to the public.

KELLY: So what are the odds now that they really will pursue or get a change of venue, at least getting it out of Baltimore? Because even if a judge does not think that her comments warrant her being kicked off the case, he or she will have to see how she is poisoned the jury poll she wanted to try this case in front.

NAPOLITANO: If she were a serious trial lawyer, she would have made the motion for a change of venue herself or she would join them in the change of venue. Because the worst case scenario for her is a conviction in Baltimore and then a reversal by an appellate court because of the prejudice that she personally caused and the appellate court ordering the trial judge to prevent her from trying it a second time. So she knows her stuff. She'll be happy to send this case to Annapolis or some other place in Maryland where they have an inner city but not one that's prejudice by her words and by the Baltimore events.

KELLY: And not one where the murder rate is suddenly skyrocketing and the arrest rate is falling precipitously as well.

Judge, good to see you.