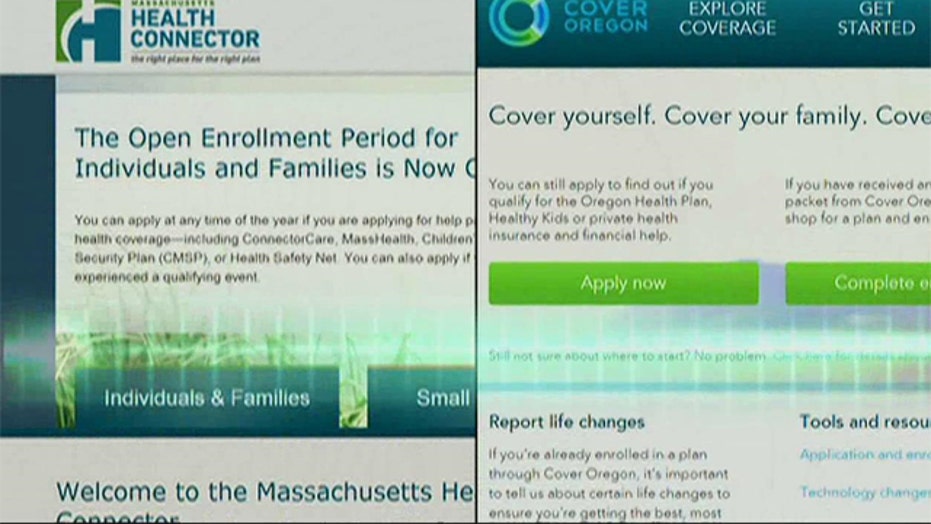 CHARLES PAYNE: The plan is single payer. That's what they would love to do. We all know the goal. As far as the individual sites, though, failing, I think it's an embarrassment because you think of all the pressure that the White House has put on Republican governors for not playing along, not participating, and setting up these sites. It's a big failure for a lot of these folks, now they're going to a national site that doesn't work.

DAGEN MCDOWELL: The exchange in Massachusetts had been up and running since 2007 and them trying to convert it to all the requirements of the Affordable Care Act that, in part, was one of the things that was a disaster for that state. In Oregon, the FBI is investigating the failure of its website. So, I think it shows you that bureaucrats, whether at the federal level or at the state level, are just ridiculous and when they're given money, they will spend it recklessly and you get nothing for something.

CHARLIE GASPARINO: I would say this; I had a big debate with Austan Goolsbee where he said, "ObamaCare is a private sector solution to our health care crisis."

CHARLES PAYNE: More small businesses are dying than are being born, it's the most frightening stat I've seen in a long time and it's been happening for a long time. The last three or four years has been a death spiral and it's not going to get better; it will actually get far worse as we talk about forcing higher minimum wage.

DAGEN MCDOWELL: I think a lot, I think some of it has to do with we are a bigger, more developed economy and you have bigger companies getting much bigger, and smaller businesses falling by the wayside. Is it disturbing? Absolutely.

CHARLIE GASPARINO: A lot of small business owners will tell you that what's preventing them from being happy about the future is hiring more people, regulations, and taxes.

BEN STEIN: I don't think it's our macro enemy either. People can buy things of good quality at Walmart for very low prices and like the ones owned by Dagen's ancestors and put them out of business are hurting them, but that's not necessarily a bad thing for Americans. It's a good thing for Americans to be able to buy things cheaply.

ADAM LASHINSKY: Of course it's concerning, we want to be creating businesses. But the more important gauge is overall employment. We're not doing enough to stimulate jobs, but we are experiencing job growth.

DAGEN MCDOWELL: You can't say something that is not true that could damage a reputation.

CHARLIE GASPARINO: Opinion is protected, but if he went on the on and said, "Listen, I made up stuff up about this product", they have a case.

CHARLES PAYNE: Someone tried to sue me for being racist. We're all vulnerable until they can clean it up.

ADAM LASHINSKY: That is a concern. We won't get there because opinion is clearly protected. Commercial activity is another story.