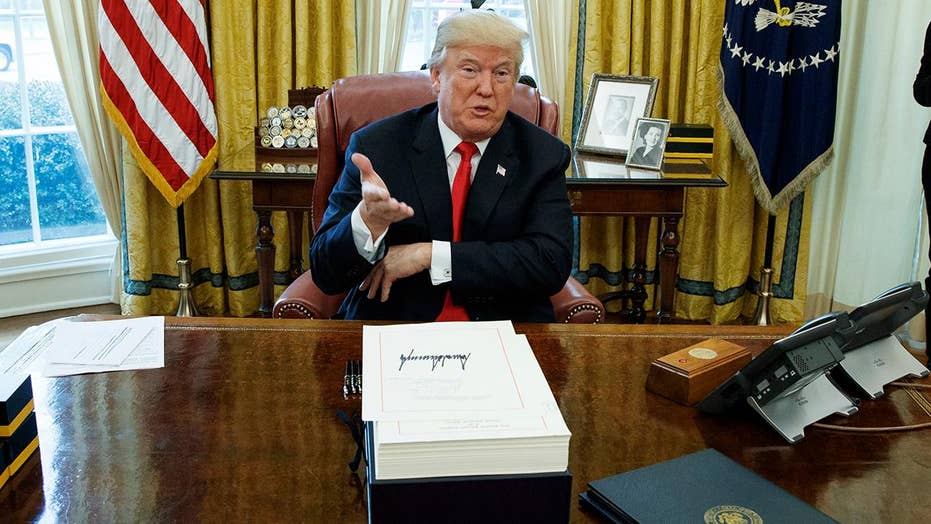 What does the president needs to do in 2018 to keep the U.S. economy booming?

Gary Kaltbaum: Well, look, there's a lot of rhetoric on both sides. The only thing I care about is outcome. The stock market has soared, the economy has accelerated, and unemployment is down at 4 percent. Hispanic and black unemployment are at lows going back many, many years. You have 1.5 trillion dollars being kept in the economy over the next ten years because of a tax bill, which, by the way, 500,000 people are now getting $500 million because of it and then let's throw in the mandate, that stupid, silly mandate that hurt the people that make $50,000 or less most. That's going by the wayside. And I'm a happy camper with all of this and I hope it continues.

David Mercer: I say that's an inherited economy. Nothing to do with Donald Trump. Well, the one accomplishment they will speak to is the tax cut that was just passed. That, I don't think, makes for a great presidency, and won't make America great again. Just think about it, on average, we're going to have one major piece of legislation per year by this president so at the end of this we're going to be saying he was a great president with four pieces of legislation? Come on, I don't think so.

Gina Loudon: It's impossible to pick because there's honestly so much. To call it one piece of legislation is really just to highlight the fact that the Democrats have been wholly uncooperative with anything to boost our economy, even tax reform. The president has gone ahead and done things without them, like deregulation, like you mentioned. I love that because that's freedom.

Tracee Carrasco: I'll agree the economy. The Trump administration has been good for Wall Street, our 401(k)'s, that's what a lot of people care about. We're looking at the markets and the Dow up 25 percent year to date, the S&P 500 up 20 percent, and NASDAQ up 29 percent, and these are big numbers, and I think this has been a big accomplishment to carry through 2017.

Gina Loudon: I think it's a good question to ask whether or not the former president should criticize the current president. I don't think President Obama should have to check his first amendment card, but it wasn't a classy thing to do, especially overseas.

Gary Kaltbaum: Look, there have been only 44 different presidents, it's a small club. This should be easy, but it does go both ways. A sitting president should also not be putting down a past president and that's been going on also.

David Mercer: I would say what you say, there is no mention of Trump there. Secondly, it was good advice to leaders in corporations, in colleges, or anywhere else. Thirdly, it's a worldwide web so what any president, former or otherwise, said is going to end up on the worldwide web.

Gary Kaltbaum: You know, I have to tell you, China is sitting right there West of North Korea and Japan is East South Korea. One would think in their best interests that they would put the
screws to North Korea. They are about 80 percent of the economy so it's weird to see they're acting against themselves. I don't know what to do at this point.

David Mercer: Rather than tweeting and condemning China as the president has been doing, based on one news report, he might want to rely on his intelligence agencies and our intelligence apparatus to verify, if you're going to go ahead and continue trusting China.

Tracee Carrasco: I think at this point China is a little more afraid of North Korea than the U.S. I think maybe President Trump says he's been soft working with them, maybe we need to sweeten this up, maybe a little more trade friendly approach? I don't know at this point because he said in the New York Times interview that if they don't help with North Korea, I do what I want to do.

David Mercer: Expect a big correction of at least 10 percent in the stock market in 2018