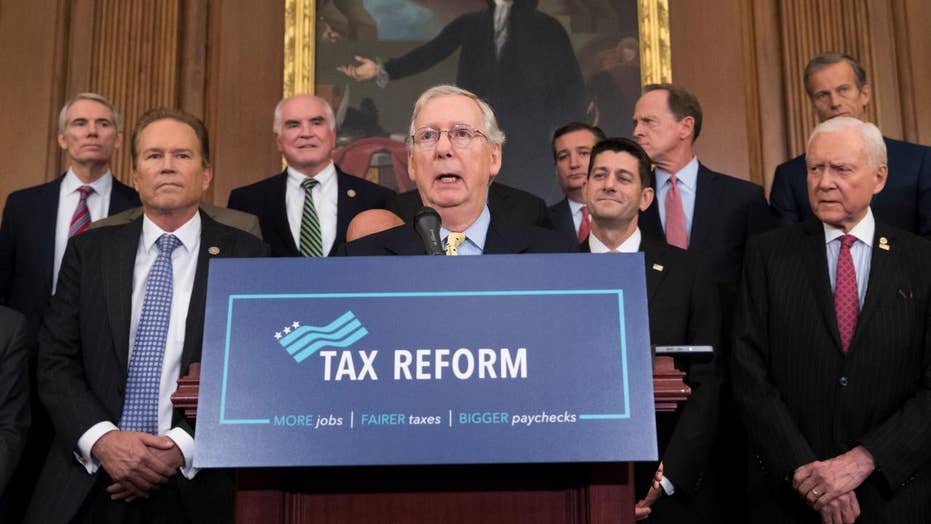 President Trump says tax reform is the key to boosting the U.S. economy. Does history prove him right?

Scott Martin: Isn't this too bad Dagen, on Friday we get the outline of this great tax plan that was going to help out the economy, help out the middle class, help out small businesses, and finally create some deserved economic growth and now you have the chance for the left and the haters on the right to say "oh my gosh, look at all the corruption in D.C. Now you're going to take the official focus away from what really ails this economy which is tax reform and tax relief.

Gary B. Smith: It won't jeopardize the new agenda I disagree with Scott on this because unlike health care, Trump is focused on the tax cuts and here's the reason. He understands it. I never got the impression nor did I think most of America that he even understood or was interested in health care.

Stacey Washington: It's a possibility but I don't see it being the main show right now. I disagree that ObamaCare is over, it's a dumpster fire. It's got to go, we're going to have to make changes to either replace it or save it. I think that republicans know that they are going to have to do something.

Adrienne Elrod: I'll tell you, there's nothing that taxes payers can't stand more than feeling like their taxpayer dollars are being wasted. Especially by government officials nor private flights. I am going to disagree with the rest of the panel I think that this is an issue that is going to continue to mire the Trump administration.

Jonas Max Ferris: It helps the agenda because this guy is a distraction and how many times is he going to bumble stuff before we fire him? I'm glad Trump gave him the "you're resigning" speech because he needed to go. He needed to go after ObamaCare.

Stacey Washington: We have a couple of choices here, and when I say we I mean the American people. If you love football and you are used to watching it and you don't want politics in it then the NFL is making a decision for you that you might not want to participate in. My opinion, I love the flag and I love this country, I'm not going to accuse anyone else of not loving it but when you put your politics into something like the national anthem or the folding of the flag, or the viewing of the flag that kind of puts a nasty taste in my mouth.

Gary B. Smith: You mentioned ticket sales are down 18 percent even ratings, which are up at this time, are mixed down. I'll tell you what, all of the owners need to see is people not coming to the stadiums, advertisers on TV pulling out and I bet there will be a regime change.

Scott Martin: I agree with the poll Dagen. You're right; Adding the gasoline to the political fire was not good, it was not good timing as Adrienne pointed out. But let's go back to Gary B's alliteration there which is that the NFL was already wobbly and this might be the knockout punch.

Jonas Max Ferris: For the lost people that are fans, I think that you are going to gain people. I stopped watching the NFL because they couldn't dance in the end zone for a while. They turned that around this year and I was excited to start watching. I think Muhammad Ali was popular even though you didn't agree with his politics, because he had political opinions. I think there is going to be gains here also.

Jonas Max Ferris: I think I have an undiagnosed to peoples babies on the plane but I don't complain about it or make a scene, because at the end of the day babies are allowed on the plane even when they're screaming the whole flight.

Stacey Washington: I just want to know when it became in vogue to refuse to obey the direct orders of flight personnel. You sing a ticket that says you agree to follow their orders. If she makes this announcement, it's not safe to keep her on the plane.

Adrienne Elrod: Yeah I think that we're more in agreement here, the other thing here is that this looks really bad for southwest airlines. Anytime they have video of local law enforcement pulling someone off a plane, it's bad for the airline. If you're allergic to dogs and it's that bad, don't fly.

Scott Martin: Have you noticed these videos? The situation is always escalated by the passenger. The cops come on because it's always the last resort to get them off the plane.