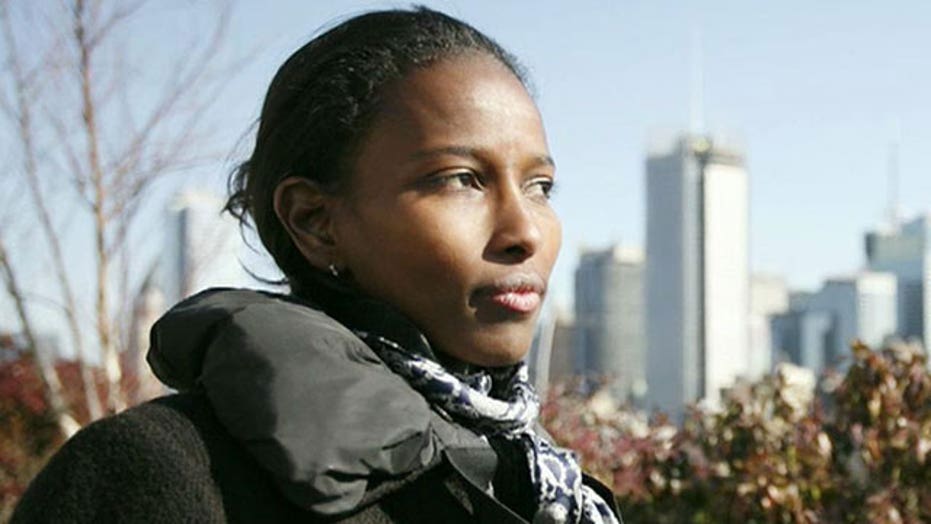 New look at forces behind Brandeis pulling honor for Ali

This is a rush transcript from "The Kelly File," April 25, 2014. This copy may not be in its final form and may be updated.

MEGYN KELLY, HOST: That's cute. He was Imam Webb there. Leader of a Boston mosque. Talking about Ayaan Hirsi Ali. And outspoken professor, lecturer, an advocate for women's freedom and women's rights, in particular in the Muslim community. Tonight, we have new e-mails about Brandeis University and its decision to revoke an honorary degree that they had offered Miss Hirsi, she recently attracted attention for her involvement in a documentary titled "Honor Diaries," which exposes brutality against women in the Muslim world.

AYAAN HIRSI ALI, WOMEN'S RIGHTS ACTIVIST: The more we say, OK to [inaudible], the more we kind of come-up with all kinds of arguments that help us do nothing about the situation, that what we're really doing is just looking away?

KELLY: She was born Muslim, she was raised Muslim but she was a victim of a more radical form of Islam and was mutilated as a result as a result. She has now been very critical, not just a radical Islam but of Islam in general. And critics' reaction to "Honor Diaries," her movie was fierce. They wound up pressuring certain schools like the University of Michigan to cancel screenings of the film and now for the first time, Brandeis University, the one that revoked her honorary degree, its President Fred Lawrence is explaining his decision to take away that intended honor. In an e-mail, he wrote a select group, quote, "Outside groups played no role in the ultimate decision." That claim, however is now being challenged. As we have reported, the Council on American Islamic Relations (CAIR), also known as CAIR played a very big role on stoking opposition against Mrs. Ali, the Brandeis president refuses to acknowledge that obvious facts and confirmed fact seems to stretch credibility. CAIR is also giving credit to that very imam we just showed you for joining in its effort. Ben Shapiro is editor-and-chief of TruthRevolt.org. His group came out with some of this new information tonight. Ben, so, Mr. Lawrence, Fred Lawrence sends out this e-mail that you got on your hands on saying, my focus in revoking this was on listening to the voices of students, faculty, alumni, trustees and other members of the Brandeis community. Outside groups played no role in the ultimate decision. Really?

BEN SHAPIRO, EDITOR-IN-CHIEF, TRUTH REVOLT: I mean, obviously that's untrue. The Muslim Student Association was heavily involved in pressing this and that was true for students on campus, but they were coordinating with folks off campus including the Council on American-Islamic Relations. And as you mentioned, folks like Imam Webb who has a pretty virulent history of his own with regards to anti-Semitic comments and association with terrorists including people like Anwar aw-Awlaki - in fact, Deval Patrick, the governor of Massachusetts uninvited Imam Webb just last year from an inter faith event after the Boston bombing because the Islamic society of Boston was connected with the Boston bombers, or at least they were attending this Islamic society of Boston Cultural Center from time to time. So, the radicalism of the outside groups that were pushing for the revocation of this particular degree to Ayaan Hirsi Ali. It's unquestioned, it's also unquestioned that they had obviously some impact on the Brandeis University decision to do all of this.

KELLY: And this guy, Imam Webb, he is a convert to Islam, as is Ibrahim Hooper, also a convert to Islam. I mentioned it because Ibrahim Hooper was on this program condemning fake Muslims like Hirsi Ali. She was actually raised as a Muslim but left the faith. In any event, he's a convert to Islam but has embraced the faith and is out there ripping on Ayaan Hirsi Ali because he doesn't think she's has a right to speak to these issues anymore. Because she has become such a critic of the religion.

SHAPIRO: Well, this is sort of the problem is that the Council of American-Islamic Relations, Imam Webb, essentially they say that there is only one group that gets to speak about Islam and that's them. Anybody else who has a contrary view of Islam from Ayaan Hirsi Ali to folks who are, you know, less extreme than Ayaan Hirsi Ali on her interpretation of Islam, none as groups have anything to say, because they're not the experts. These are the experts. If you agree with them by the way, and you don't know anything about Islam, that also makes you an expert. All of the faculty members at Brandeis wrote a letter to the president of Brandeis asking that the invitation be revoked, all of them are apparently experts on Islam even though they've never spent one day as a Muslim or under Muslim rule as opposed to Ayaan Hirsi Ali.

KELLY: And this guy, Imam Webb, sent out, you know, congratulations, an e-mail to the Muslim community for the pressure that they put on Brandeis. So, you know, clearly why the President won't just admit that he was enormous pressure from outside groups to revoke this honor he had offered her. He came out and said look, I'm a staunch advocate for free speech, but based on her past statements that unambiguously condemn Islam as a religion, I had to do this. And he said some believe we're applying a double standard because the university has rewarded other honorary degrees to people who have made controversial remarks about Israel but that wasn't on my watch, he says.

SHAPIRO: Well, if it wasn't on his watch, you know, great for him. But it would be nice if he had to explain that standard before he decided to revoke this invitation. As opposed to when he did revoke the invitation. The fact is that Brandeis University has given honorary degrees to people like Tony Kushner, they did that in 2006, and Tony Kushner who has said that the state of Israel should never have existed. Tony Kushner when they gave the award to him, they said, look, we don't have to agree with everything that he ever said in order to give him an award. That seems to me a far more reasonable standard than this new idea that we have to agree with everything you ever said in order to give you an award at Brandeis University, I mean, that would basically rule out everybody on earth.

KELLY: It's very interesting defense because a simple Google search of Ayaan Hirsi Ali would bring up her comments. It's not like that you have to dig deep in the internet to find out what she has said on the past. And yet, this university president wants us to believe that, oh, he was completely shocked and it had nothing to do with the outside influence of these groups.

SHAPIRO: Thanks so much.