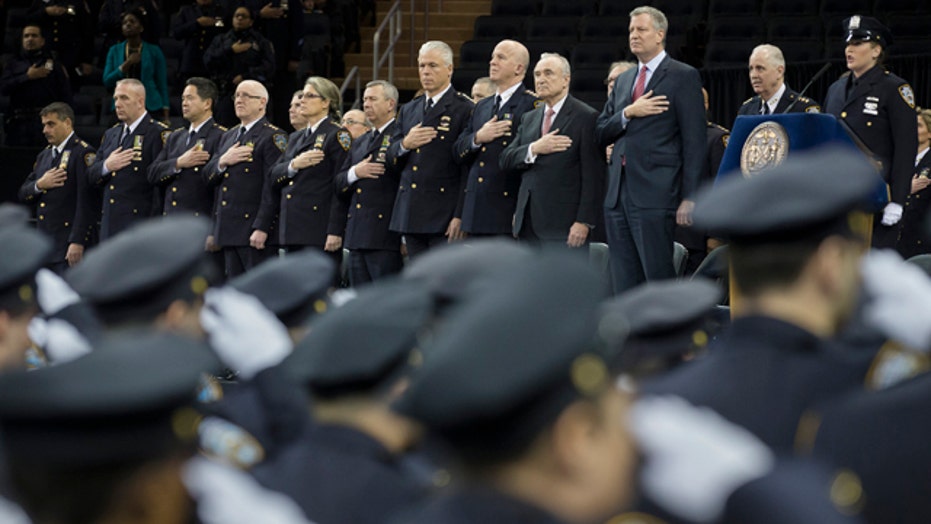 New front in battle between NYPD and NYC mayor

This is a rush transcript from "The Kelly File," December 29, 2014. This copy may not be in its final form and may be updated.

MEGYN KELLY, HOST: And breaking tonight, we are now learning that New York City's mayor will act to try to tamp down the mess we're seeing here.  He'll be meeting with the heads of five different police unions tomorrow including some of his harshest critics. One of those leaders joins me now.

Sergeant Ed Mullins, who's president of the Sergeants Benevolent Association and he's one of the men who turned his back on the mayor in a now viral video the night those officers were killed.

Ed, good to see you tonight. Thank you for being here.

KELLY: And so you're going to meet with Mayor de Blasio tomorrow because it has finally reached a boiling point apparently and the mayor's now paying attention to the feedback he's getting from the NYPD. Why?  What did the trick?

MULLINS: Megyn, that's a great question. But before I get into that, I want to thank law enforcement across the country for supporting the NYPD and giving us an outpouring of support for the funerals that they have attended this past weekend. And these attacks that are occurring across the country right now in a broken trust between the communities and the police is going to end tonight. And we're going to fix it here in the NYPD and set the stage across the country for the rest of this nation where every police officer is suffering.

KELLY: How? How? Because your critics will look at the NYPD and they'll say, you created your own circumstances by the quote, "chokehold" in Staten Island that led to the death of Eric Garner. The police in Ferguson, Missouri are the ones who caused this distrust. The alleged racist cops that Mayor de Blasio has been telling his son about, they're the ones to blame. Not the mayor, for telling it, quote, "like it is."  This is what his defenders would say.

MULLINS: Yes. That's what they will say. But what I'm going to say is a statement that came from the book, the team arrivals from Abraham Lincoln, for the good of the nation and for the good of the people somehow we need to find a solution to upright this ship so that law enforcement continues to prevail and provide the safety to the citizens and to themselves going forward. There's been a lack of leadership across this nation and within this city. And hopefully the dialogue that may occur with this mayor tomorrow will help to set some kind of direction.

KELLY: What do you want to say to him?

MULLINS: I think that the mayor needs to humble himself. He needs to change his philosophical views to policing and to the way protests have occurred within the city on the backs of police officers. And that we need to educate the public as to how our criminal justice system works. It may not be perfect, but just like last week when we see a judge release two individuals who were threatened police officers, we had to live with that.  We had to live with the decision of the courts. And we didn't go out and tie up bridges --

KELLY: Ed, do you think you're going to get through to this mayor?  It's not like nobody said that to him before. And yet he continued to go out there and talked about how his biracial son needed to be wary of this police force.

MULLINS: Whether we get through the mayor or not, at the end of the day, this country is run by the people. And if the mayor is held accountable through the people, then we'll see changes. Vice President Biden is the only person who gave any inspirational remarks in six months of all the turmoil that's been occurring throughout the country. And he did that the other day at this funeral. He spoke, he talked about the history of America, the importance of police and the idea of building and going forward. And I think we need to look at his words. And we need leaders to step up. There has not been one single leader in six months to set the stage to educate the public, to educate the police --

KELLY: No one in office now. I mean, Mayor Giuliani has been out there --

KELLY: -- as a forceful advocate of the NYPD. He has said that the mayor needs to apologize to the NYPD. Do you agree with that?

MULLINS: I do agree.

KELLY: Apologize for what?

MULLINS: I think that his actions may have enabled this city to become a lawless city in a lot of ways. The good thing is --

KELLY: What about -- is it true these cops are standing down and not issuing summons? This has been reported. It seems tough to believe knowing the NYPD. These are tough guys and gals.

MULLINS: Well, what's taking place with the police right now is we're responding to each other's jobs backing up each other. The threat to police officers as you just highlighted in this broadcast is real. It's occurring throughout the country. And we certainly don't want to see any police officer being ambushed again. And our priority is to provide security to the city, but make sure that we're secure enough so that we can go home to our families.

KELLY: Yes. Exactly right. Which you have a right to do. Thank you for being here, Ed.

MULLINS: Thank you for having me.