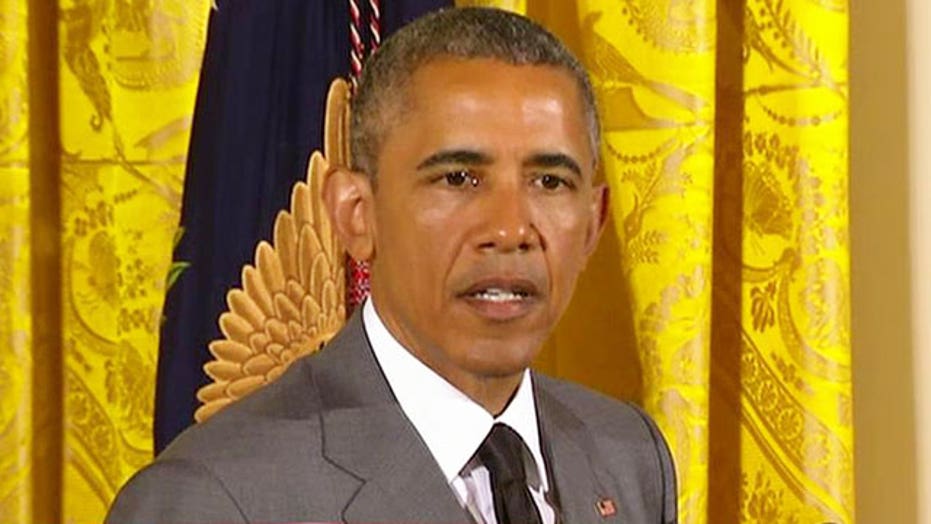 New fallout over Obama's remarks about his legacy

This is a rush transcript from "The Kelly File," June 1, 2015. This copy may not be in its final form and may be updated.

MEGYN KELLY, HOST: Breaking tonight, one week after President Obama gets hit for praising his own foreign policy, which he bragged had, quote, "ended the major ground wars," he does it again.

Welcome to "The Kelly File," everyone. I'm Megyn Kelly. It happened late this afternoon at the White House as the Ppresident was making remarks to Asian leaders and sharing his take on our place in the world.

PRESIDENT BARACK OBAMA: People don't remember, when I came into office the United States in world opinion ranked below China and just barely above Russia. And today once again the United States is the most respected country on Earth. And part of that I think is because of the work that we did to re-engage the world and say that we want to work with you as partners with mutual interests and mutual respect.

KELLY: And he went on -- unfortunately, we didn't cut it -- to talk about how this is in large part, thanks to the fact that we have ended the two ground wars and he has pursued a policy against terrorism. We'll get that cued up for you.

But while the polls suggest that America may again be popular, critics suggest that America needs to be more engaged. In reports out of Iraq, we learned that the Islamic State terror army captured or destroyed more than 2,000 U.S. armored vehicles in one battle. From Syria, the BBC detailed how the terrorists just released cell phone video appearing to show jihadists torturing a 14-year-old boy as the militants reinforced their control of at least half of that country. They've got half of it now.

In Yemen, which was relatively recently touted as a success story in the president's Mideast policy, there was a glimmer of good news as an American hostage has been freed. But -- excuse me -- foreign news services are reporting that there are still U.S. citizens trapped there at risk of kidnapping or murder.

On the other side of the world, the Navy on Friday released pictures of the Chinese appearing to put artillery guns on uninhabited island in the South China Sea where they can threaten vital shipping lanes. So far the Chinese are ignoring U.S. calls to stop.

And to bring us full circle, the head of NATO last week warned about a, quote, "dramatic expansion of nuclear bomber flights from Russia," a move he called deeply troubling and dangerous.

Chris Stirewalt is our Fox News digital politics editor. Pete Hegseth is a Fox News contributor and a veteran of the Iraq and Afghanistan wars and CEO of Concerned Veterans for America.

Guys, thank you very much for being here. Pete, let me start with you.

So, unfortunately we didn't cut the sound bite long enough because he went on in that sound bite to say, "Once again the United States is the most respected country on Earth and part of that is because I think of the work we did to re-engage the world and say we want to work with you as partners with mutual interests and respect. It's on that basis we were able to end two wars while still focusing on the very real threat of terrorism and to work with our partners in places like Iraq and Afghanistan." This just happened a week ago. It just happened. And he does it again, even despite universal just shock in response to his comments that seemed to say, let's celebrate, those two ground wars are done, it's great, we're just focused now on that one little remaining battle of terror.

PETE HEGSETH, IRAQ AND AFGHANISTAN WAR VETERAN: It boggles the mind.  He lives in a bubble world of delusion and arrogance that none of us can relate to at this point. He says that he ended two ground wars and is now just focused on terrorism. Not only did he not end two ground wars but he created a war in Libya, induced a war in Lebanon, invited a war in the Ukraine through weakness, exacerbated the war in Syria through not having a strong policy on red lines and what we were going to do there. He has invited a Pandora's Box of chaos by living in a delusional world that by retreating from battlefields you improve situations. And that's why to watch what he said about Iraq, especially as a veteran myself, that was a place they touted as a victory in 2009, 2010. Today descended into chaos.  Yet he just steps back and says we're much more respected. Find me an ally right now that respects us more from the UK, to Israel to the Ukraine, to anybody else across the country. There's only two countries that respect us more today, Megyn, than they did in 2009, and that's Iran and Cuba because they're benefiting from our policies right now.

KELLY: I don't know. Maybe they like us more. But he may be right on the polls, Pete, because we looked. The Gallup poll, apparently Gallup polls a bunch of countries every year to find out who believes in leadership, like who has the best leadership, which country has the best leadership. And back in 2007 and 2008 the United States was at 38 percent, 34 percent. China in 2008 was above us at 40 percent. And now today China's fallen to 29 percent. And the United States is finally above them at 45 percent. So the president may be right. We're beating China.

HEGSETH: Well, there's a low bar. It bumped up -- I looked into it, it's also bumped down. There's also a BBC poll that compete with the shows an entirely different trend. And there also new countries that were added to that poll since 2009 that they're more weighted toward liking the United States of America. Hey, I like more countries to love us. I invite that. I want that. But if you're looking without -- if he's got to cling to one talking point and one poll to claim that the world is better and our friends like us more when in reality where the boots hit the ground our interests are being washed away and our gains are being given away --

HEGSETH: It's hard to argue that our friends would like that.

HEGSETH: Well, that's the biggest question. He goes with liked. He talks a lot about mutual understanding and he doesn't talk as much about respected. Respect is very different. Respect is earned. Respect is earned through allegiance and standing by allies in difficult moments, by making sure your word means something, by finishing things you started. So for him it's about being liked. It's about unclenching our fist and just shaking hands with anybody for the sake of shaking hands as opposed to having a strong stance when it's difficult sometimes and doubling down where you need to. Our previous president at least understood that I think world leaders respected that about him. Maybe they didn't like him all the time or love every move that he made. But there was a veneer of respect that unfortunately right now with this commander in chief we just don't have.

KELLY: Pete, good to see you.

STIREWALT: Moving up. We're -- Pete mentioned the BBC. Polling the world is impossible. And there are a lot of people who try a lot of different ways because you have to do on the street interviews, face to face. It's a disaster. But you can get some snapshots. And we can say that in that BBC metric the United States did surpass China and move into a hot eighth slot as the eighth most popular country in the world. But of course as Pete pointed out, you pointed out, that doesn't have beans to do with whether or not you're actually respected. Being liked --

KELLY: It's like the Miss Congeniality award. It's like you didn't really place in the top 10. I guess, top 10, yes. Top five. You know, you're still well liked. Which he seems to accept as a victory.

STIREWALT: The European Union is very well liked. I highly doubt anybody thinks that they draw much water when it comes to shaping world affairs.

KELLY: But here's the more important question. I was trying to get to this with Pete, too. Oh, we have the sound bite now. Unfortunately, it's 9:07, and the show starts at 9:00. But my team does a great job anyway. Tonight they cut the sound bite a little wrong. Here it is in all its glory.

OBAMA: It's on that basis that we're able to end two wars while still focusing on the very real threat of terrorism.

STIREWALT: In Afghanistan we've got almost 10,000 troops still in Afghanistan. Some of them sadly getting killed by the people that are supposed to be their allies sometimes. We have more troops in Iraq and we will have more and more and more troops in Iraq and Syria as time goes by.  You can feel it. You can sense that that's what's going to happen.

KELLY: But this is a real world philosophy because I think President Obama and some on the left would really like to accept that because we pulled the troops out of Iraq that thing is done, we're out, it's over, whatever happens there now is somebody else's problem, and we can, you know, take our kids to soccer practice without having to think about it, which that would be nice to wrap that warm cozy blanket around us. But the experts say it's false.

STIREWALT: Well, first of all, it's better if it's baseball practice.  But the reality is for the president it's great that the world likes us.  It's more important that the world respects us, for goodness sake. But we don't care, in the business of politics we don't particularly care what the rest of the world thinks. We care about national security. How safe and how secure do Americans feel? And we're pretty good at polling public attitudes in the United States over the long haul, and do you know what voters in America agree? They feel less safe. They feel like their position is more in peril. For the president to use a legalistic definition, to say because he ordered combat -- major combat operations to be over, that we're not at war, that this is supposed to encourage us at t-ball practice is not going to cut it and the polls continue to tell us that Americans feel very unsafe, in some cases as unsafe as they were in the shadow of 9/11.

KELLY: Mm-hmm. I mean, it's like what is it about the beheading, including of several Americans, that we don't find war-like? Is it war- ish? You know, war-y? I don't know. But it feels like real war. Chris, good to see you.