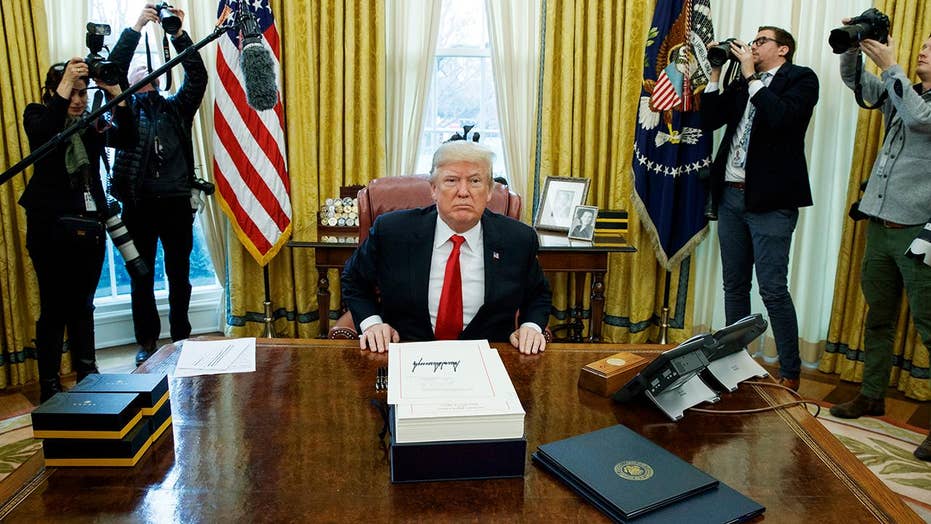 Gerri Willis: 80 percent of the folks get a tax cut and that's the good news and may be surprising to people out there. Little things people are going to get upset about. If you sell your house you're going to pay more taxes than you would otherwise, benefits at work like transportation might go away because the deduction goes away. Small things that won't be there that people have come to rely on. One thing that I think is critical that they've missed, they've kept the carried interest deduction which benefits these hedge fund manager- this is how they get paid but they're being paid as if they're investing money, that's not fair, that's got to change.

Gary Kaltbaum: This is an absolute big disappointment. I hate loopholes for anybody. How do you tell police officers in New York City that are protecting lives they're going to pay a higher tax rate than people sitting behind the desk and trading and making oodles and oodles of money, it's not fair and a heck of a selling and talking point for the other side.

Jessica Tarlov: One of the big promises that Donald Trump made on the campaign trail was that he would personally be paying a lot more. We know that people who have companies set up the way that President Trump does aren't going to the way the that the pass-through taxes are going to work and the real estate scions going to benefit a lot. One of the bad surprises is the repeal of the individual mandate with ObamaCare. This is a $330 billion loss in revenue for the country and it's an incredibly big deal.

Rachel Campos-Duffy: I think families are going to like it. Republicans are going to be able to own the success of this because I believe in the end this is going to be rocket fuel to this economy. Republicans going to be able to prove this sort of community organized, socialist European model of running the government the way the Obama administration did led to very lackluster growth. This is the way to grow an economy and when you do, you help families. I do also have some things to quibble with. I'm extremely disappointed at the loopholes that were closed in Puerto Rico. This essentially just raises taxes on the island and it's going to push manufacturing off the island. I think this is a big mistake, but it can be fixed and Paul Ryan and Mitch McConnell can join with Democrats and make a fix and they should.

Gerri Willis: This puts everything on hold because the Democrats are going to season every headline and drag it out of the spotlight and talk about it incessantly and we're going over and over and over this stuff. It's going to be nonsense but it's going to really hard to get anything done. I fear for the next steps in the agenda. Hope springs eternal, we saw the government financed this week that's good news for how much the Republicans are able to get done. I think February is when the new withholding charts kick in and we start seeing the money in our paychecks. Every tax reform that comes in is unpopular until people see the results. We'll see them early, that could help, but the steady drop, drop of bad news from the Democrats is not going to be easy to overcome.

Jessica Tarlov: There are people on both sides of the aisle who have full faith of the Mueller investigation. This will be a drag on the president's agenda and I think he should reconsider taking up welfare as the next step and go to infrastructure. That's something the Democrats would have harder of a time to say they are not interested in. But if you're going after entitlements right now after this big tax break for the wealthy I think that's not the greatest PR move.

Rachel Campos-Duffy: I absolutely think that infrastructure should be next move. I don't think that we should put of entitlement reform forever we do need to tackle that. The drip, drip, drip of the Mueller investigation may not be as bad for Trump as we think. I think it may be bad for the Democrats. Right now the house and the senate investigations into this are thinking about declassifying a lot of things that happened at the DOJ and FBI, where we see that the DOJ and FBI used the justice system to both go soft glove on Hillary Clinton and her e-mail scandal so she wouldn't get hurt and then they had this “insurance policy” as we saw from Peter Strzok's e-mails or text messages uncovered that they were trying to undermine or undo the election, should Donald Trump win, which he did. This is really bad news if the DOJ was used in this way.

Gary Kaltbaum: Next November there is a gargantuan election coming up that if the Democrats take over, they are going to try and impeach the president so everything the Republicans do now are based on that. That's why I don't think they're going after entitlements, they're going to be bashed over it. They may go after infrastructure because the Democrats might be possibly on board. I'm not worried about Russia unless there's an indictment of consequence, that's an unknown at this point in time

Gary Kaltbaum: For every action there's an equal and opposite reaction. When you mandate cost of businesses A, there's going to be less hours, B, there will be less people working or go into robotics-by the way we're seeing that happen in many cities. The good news is a lot of these increases are modest, but in some cities, they're more than others. And that is 100 percent affecting jobs. Places like Seattle, that have moved up to $15 and it's definitely hurt.

Gerri Willis: It's already happening because of tax reform. Companies are saying, hey, we're going to give money to employees and raise to $15 an hour because we know we're getting benefits from tax reform and the economy is going to grow and get bigger and we're going to do better and share with employees. That's the way. Let the companies decide, because they know, A) when they can afford it and B) when it makes sense. I think we're coming on a year where we will have really good wage growth. We don't need the laws from states and cities and it's a mistake to do it that way.

Jessica Tarlov: I think we all remember Gary Cohn saying, hey, you're going to put this back into your workers and raise wages and hire more people and they all sat there and were like mmm, not really. Mike Bloomberg has been talking about it and called this tax reform plan a fantasy land. I think that we will see some wage growth, but on the minimum wage front, I think the fight for 15 while a valiant effort is not a feasible country wide effort, but senate Democrats put up $12 an hour as a minimum and think it's a living wage, and if you're in a city that can afford it go up to $15.

Rachel Campos-Duffy: We shouldn't let government decide this. The market should decide this but this is what happens when you can't separate morality and free markets and capitalism. They should go hand in hand and certainly employers have an obligation to their workers, a moral obligation. That being said, I don't think these wage increases under the Trump muscular strong economy are going to have that big of a negative effect because the economy is growing, there's competition for workers and wages are going up anyway.

Rachel: We will learn deep state Democrats and Never Trumpers tried to influence the election

Gerri: Critics will freak out in 2018 as Americans start to feel the benefits of tax cuts

Jessica: President Trump to get a bump in his approval rating