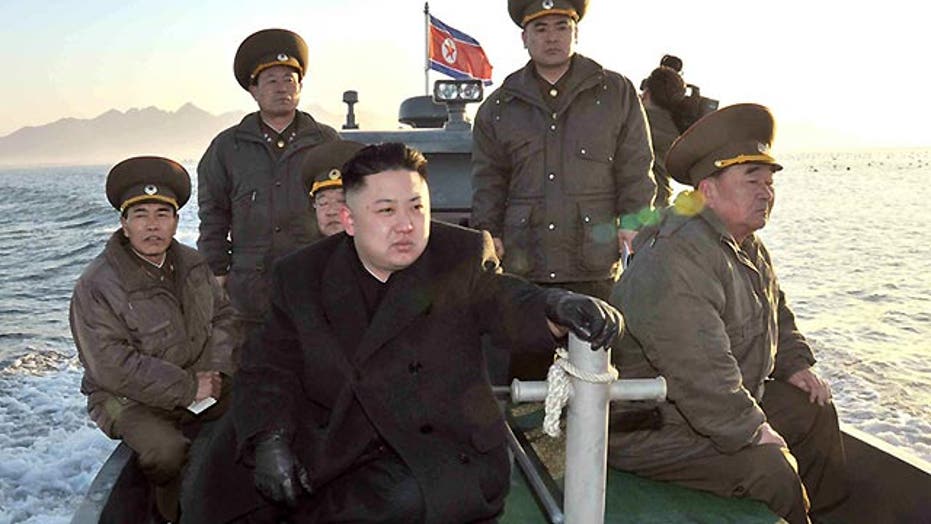 This is a rush transcript from "Special Report," May 20, 2015. This copy may not be in its final form and may be updated.

UNIDENTIFIED REPORTER: Going back to North Korea, is it your assessment that they have developed the capability to miniature nuclear warhead and put it on a ballistic missile, like the KN-08?

ADMIRAL BILL GORTNEY, NORAD COMMANDER: Yes. Our assessment is that they have the ability to put it on -- a nuclear weapon on a KN-08 and shoot it at the homeland.

UNIDENTIFIED REPORTER: North Korea said today they developed a nuclear war heads small enough to sit on the head of a missile.

UNIDENTIFIED FEMALE: Are you concerned with how that might raise tensions in East Asia?

HARF: Well, regarding that specific claim of miniaturization, we do not think they have that capacity, and our assessment on that hasn't changed.

BRET BAIER, ANCHOR: It's just a matter of weeks between those two press conferences. This is about North Korea, their announcement that they have miniaturized a nuclear warhead suitable for an ICBM, possibly a threat to the U.S., two determinations by the U.S. about that. We're back with our panel.

Yochi, what is this administration thinking about North Korea?

YOCHI DREAZEN, FOREIGN POLICY: I think they are thinking, boy, it would be nice if they went away so we could talk about ISIS and Iran and the parts of the world we really do care about and not Korea, which keeps yanking us back. And unfortunately they can't. North Korea is like that sort of annoying cousin in the corner who will do anything he can to get your attention. We genuinely don't know with Kim Jong-un. We don't know what he wants to do.
We don't what he can do. And that's I think what you're seeing reflected the completely opposite messaging coming out from a uniformed member of the military and then spokespeople. They just honestly don't know.

A.B. STODDARD, THE HILL: We have had intelligence confirmation for two years now that we believe they have this capability. And at the same time, our government says we could intercept a missile here, no problem. And it's no comfort to the South Koreans, and it's obviously not a policy they are taking seriously enough if they allow two or three separate messages to come out of the same government.

CHARLES KRAUTHAMMER, SYNDICATED COLUMNIST: This is scary in three ways. Number one, the North Korean leadership is probably clinically nuts, or certainly paranoid. And we have no idea what they can do and what they will do. And if they have the miniaturized weapon, or eventually they are going to get it within a year or two or three anyway, they actually could hit San Francisco or Los Angeles.

Second, they share everything. They are actually helping in Syria.
We know they are helping Iran. And if they learn how to miniaturize and they translate the intelligence, that accelerates Iran's going nuclear.

And the last thing, the scariest of all, is in the midst of all of this, Ramadi falls, this announcement from North Korea, the president gives an address to the Coast Guard Academy and talks about climate change as the great threat to our national security. That is the scariest of them all.

BAIER: Yochi, you have Ed Royce, the House Foreign Affairs chairman, who sees the intel, says that this intel, this technology is shared with Iran and that the North Koreans situation is one that the administration wants to downplay. So, you know, where do we go from here?

DREAZEN: I think with North Korea the grain of salt we have to take is they have made claims before that were false. In 2012 they launched a rocket that blew up in midair. They said we could hit Hawaii and Guam.
That never happened.

I think where we go is trying to figure out what do you do with a regime that is unstable where talking to them doesn't ignore, ignoring them doesn't work, bribing them with money as previous administrations have tried doesn't work. And I think you end up going back to what you hope in can be before, containment, move on, hope eventually that regime falls.
That's been unspoken policy for decades and it clearly hasn't worked.

BAIER: This is how they negotiate.

That's it for the panel.