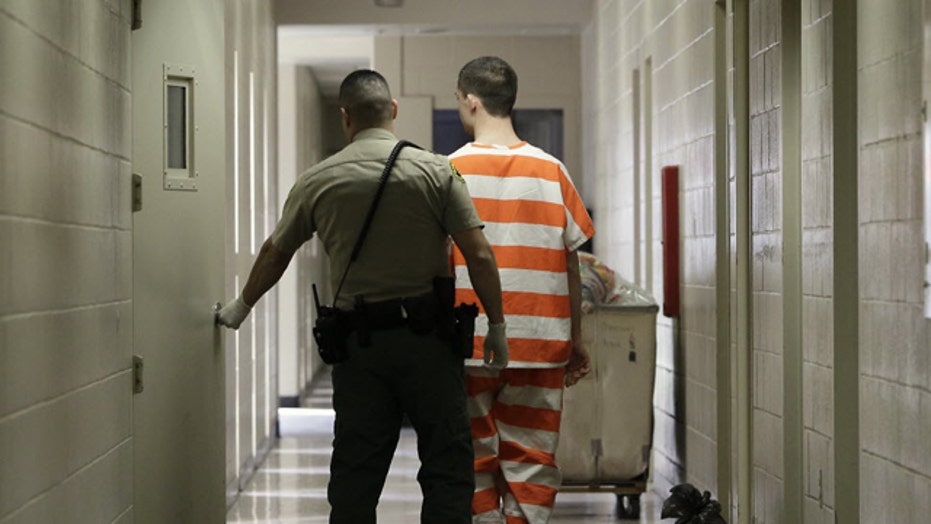 Andy McCarthy on why offenders are being released early from prison

This is a rush transcript from "The Kelly File," April 21, 2014. This copy may not be in its final form and may be updated.

MEGYN KELLY, HOST: Breaking tonight as the White House once again flouting the law. New fallout tonight just hours after the Obama administration announced his plans to release thousands of convicted, convicted drug offenders from prison. They had their trial and they are about to get out.

Welcome to "The Kelly File" everyone. I'm Megyn Kelly. Hours ago, President Obama's Attorney General Eric Holder announcing plans to dramatically increase the number of non-violent criminals eligible for presidential clemency, meaning, a get out of jail early card. Attorney General Holder says, it all comes down to fairness, but what exactly is fair about telling the justice system that President Obama knows best?

Andy McCarthy is a former federal prosecutor and contributing editor to the National Review.

That's what it is. I mean, there has been a trial.

KELLY: There has been a detective and a prosecutor who decided charges ought to be brought under the law that was passed by the people's representatives and sign into a law by a president, there's been a defendant, a defense attorney, a prosecutor, a prosecution, and a conviction.

KELLY: And now the president is going to step in and they are saying thousands of cases.

KELLY: Hundreds of thousands and say I know better.

MCCARTHY: Right, just as the president uses prosecutorial discretion as a pretext for changing a whole bunch of laws he doesn't like. He's now moved onto the pardon power. So, the pardon power is going to be his way of rewriting the federal narcotics laws which he personally thinks are too severe.

So, it evidently doesn't matter both that Congress has written these laws, that trials have taken place under these laws and that his core constitutional responsibility is to take care that those laws be faithfully executed. He's going to rewrite them unilaterally.

KELLY: What about all the stuff that he's a constitutional law professor and he'll be following the law and he'll be doing an end to round Congress. However, Andy, he does have the pardon power.

KELLY: I mean, unlike other things we've discussed, this one is clear, he has the pardon power. Is this an abuse of it?

MCCARTHY: Yes. It's a massive abuse of it.

Look, he has a lot of raw power, the president has enormous power. And the -- power is there for good reason. If in individual cases injustice has been done, if there are mitigating circumstances in a case that warrant a correction, that's why the president has the power. But he's not taking about individual cases here. He's talking about a category of federal law that he philosophically disagrees with. So he's essentially going to rewrite Congress' laws by springing everyone. This is not about doing individual justice in cases and mitigating mistakes or hardships. This is about rewriting federal law.

KELLY: Uh-hm. And does it have to do with race? Because the non- violent drug offenders who are most likely to benefit from this, tend to be people who went to prison for dealing crack, correct? Crack as opposed to cocaine. And there has long been an argument that the laws are racist --

KELLY: In terms of the outcome on those -- because you know, you go to prison more likely if you're black and you're dealing cocaine than if you're white -- sorry, black and dealing crack versus white doing cocaine.

MCCARTHY: Right. It's a disparity impact theory. They can't conceivably say that Congress design was racially motivated, because white crack defendants get treated just like Black and Hispanic crack defendants.

MCCARTHY: What they say is because more people have been harshly sentenced under the crack laws and sentencing guidelines, that they are racially -- the racial element of it is in the impact rather than --

KELLY: Why is that not legitimate? That sounds legitimate.

MCCARTHY: Well, because racism is about the intent to use race in order to achieve --

KELLY: So not a racist intent.

KELLY: But shouldn't something be done to right that wrong, you know, the disparity between the prosecutions and prison sentences that come down on those two crimes?

KELLY: What will happen if this stands, as it appears that it will, than when we have a republican president who wants to come in and say, you know, what? I'm in the mood to pardon every single protester who stood outside of a Planned Parenthood and shouted down on a woman going in for an abortion?

MCCARTHY: Well, I guess, that will depend on whether the media decides to participates in the criticism of the president again once we no longer have President Obama in office. I think that if he thought he was being watched responsible by the media, he wouldn't do these sorts of things. He does them because he thinks he can get away with them, and in fact, he has gotten away with them.

KELLY: We'll continue to watch it. Andy McCarthy, good to see you.