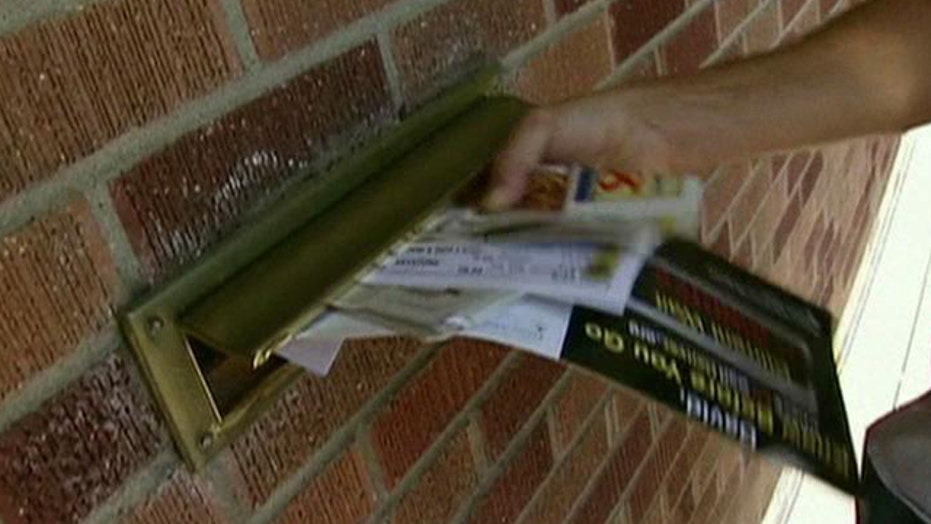 New calls to privatize US Postal Service to reduce costs

JONATHAN HOENIG: The constitution says that congress can establish a postal service; it doesn't say it has to own, run or monopolize it. In fact, as you pointed out, they are losing billions and billions of dollars year, after year, after year. That is because it is run for political purposes and not economic purposes. If you privatize the post office you would see hundred billion dollars come in to the government. You would also see much better outcomes, not unlike when stock commissions or airfares were deregulated in the 70s, or even in the postal services that have already been privatized in France, in Germany, in Denmark -- worldwide.

WAYNE ROGERS: Not that I know of. To Jonathan's point, we have privatized certain amounts. Sixty years ago, seventy years ago there was no FedEx, there was no DHL, there were none of those private mail services. In fact, it shows that the private sector can do it better; when it delivers on time, it works. All of those private companies work very well. We ought to privatize the Post Office as soon as possible and get rid of all of this.

CHRISTIAN DORSEY: First of all, why in the world are we trying to treat the Post Office like it's a business. It's a constitutionally allowed function, it's a desired function, and it has a universal service requirement that no other private sector delivery company has, nor could provide at the cost that the Postal Service does it. To treat it like a business is to completely not recognize what it is. Also, none of you have mentioned that the reason the Post Office is swimming in red ink is because it has a congressionally mandated requirement to pre-fund health benefits out to 75 years.

TRACY BYRNES: Doesn't that make it a business? Christian, I love you but I don't get that. It has financial statements, and they don't work. They are all red. They're not good. They are not matching dollars in, dollars out. This is economics and accounting 101. We have to look at it as if it was a business, and it's a failing business, unfortunately. I get what you are saying. A lot of people out there that are going to suffer if the Post Office goes down, but at the same time the Post Office is suffering because the world has changed. Nobody uses first class anymore. I send birthday wishes via email; lots of people do. Hallmark's suffering, too. What are you going to do?

GERRI WILLIS: This isn't a business. This is political patronage system. The Postal service has as many workers, very nearly, as Walmart. It's the nation's number two employer. We cannot afford this. The business model, if there is one, doesn't work. Private companies appeal to off all the profitable businesses-- this company, the Postal Service, is swimming in red ink.

WAYNE ROGERS: It's competition, Eric. If one state is going to do it, and another state is going to do it, people will flock to that state where it's the cheapest possible way to do it. Another thing that's going on there, too-- you realize that not only colleges, I'm talking about colleges sponsored by the states and universities, we also have a number. In fact there are so many private companies offering educational degrees that we have an ETF that you can buy that encompasses all these schools. School competition, competition for that will bring down the price and that is what is working. It's working in the private sector like we were talking about the post office. Working in the private sector, it will work again here.

CHRISTIAN DORSEY: I think it is worth exploring, but it's not going to do what Wayne desires, because it's not school's offering every bachelor's degree at $10,000 -- it's certain programs. What I fear it could do is that it will wildly inflate the costs of other degree programs at that very same school, so that other students could be made worse off. It's worth exploring to the extent that it can be done.

GERRI WILLIS: This is best idea Bill Gates has had since Windows. The average college graduate has $23,000 worth of debt. What are they doing with their lives? They're delaying. They're delaying childbearing, buying a house, having a family because they have to pay off all this debt. This is fantastic idea because if you can fog a mirror in this country, you can get a loan, and that is what is pushing the prices all over the country for education.

TRACY BYRNES: The answer is, to Gerri's point, that we're giving free money to our kids. We get these kids locked into four-year schools and then they raise tuition and say, "Oh by the way, you have to go back and get more money." So yeah, somebody's going to have this cheap $10,000 degree, but what about everybody else still suffering under the current system of free money?

JONATHAN HOENIG: We have a trillion dollars outstanding now in student loans. It's up about 440 percent in just the last couple of decades. To Tracy's point, that is exactly because of government involvement in education. The cost of education has gone up as government has gotten more involved. I think this idea of promising every kid a $10,000 degree is just as asinine as promising every kid health care at a certain price.

WAYNE ROGERS: You have to, Eric. The biggest problem with entitlement programs is there is no incentive to do anything about it. In other words, if somebody is getting a check and not doing anything for it, there is no incentive for them not to just commit fraud. It's going on constantly. It's done by people that are in prison, for God's sake, and by people that are dead, and people are collecting money. It's another thing that the federal government just cannot run. They don't know how to do it. They are all dumb, I guess, I don't know.

JONATHAN HOENIG: The best way to end all this entitlement fraud is to end the entitlements. The entitlements themselves are fraudulent. They operate only through force and coercion, not through voluntary trade. And they are lose-lose for everyone -- not only for the taxpayer, who has to pay for this, but also for the recipients themselves who become, to Wayne's point, dependent on the government dole.

CHRISTIAN DORSEY: I'll add one more to your list. Last year large corporations, big farm up, banks, military contractors, $8 billion in fraud charges against us taxpayers to add to your list, Eric. Also, let's just keep in mind that corporate fraud over the last seven years has more than doubled. Fraud is a way of life, I'm sorry to say. It's regrettable in all situations, but to think that you get rid benefits because of fraud doesn't make any sense at all. We don't get rid of mortgages for deserving people because some people commit mortgage fraud. It just doesn't compute.

GERRI WILLIS: Look, a hundred billion dollars a year in fraud, we can't afford it. Clearly we have to scale back these programs. I don't want to end them; I think that is wrong. But we are paying too much money. 53 percent of our entire budget are entitlements. It's too much money. And what's more have you seen the way food stamps are advertised right now? It's a weight loss program, people. This is crazy talk. We can't do that.

TRACY BYRNES: Here's the problem: there is no oversight. None of these programs have any oversight, and if no one is watching the shop- this is why the Russian mob is feeding on this right now. It's really easy to just put your social security number on something and collect.

TRACY BYRNES: We send $2 billion a year in aid to Pakistan, and what do they do? They spit in our faces, take $30 million of it and go build an amusement park where we killed Usama bin Laden. Stop sending them money.

WAYNE ROGERS: I said a couple of weeks ago I'd be wary of putting new money to work, and I said that knowing the sequester is coming up and some things like that. But if you have to, look at a couple of the housing ETFs.

JONATHAN HOENIG: It's been bad-mouthed by everyone from Mahmoud to Giselle, but I'm actually betting on the dollar right now. The Yen is at multi-year lows. The Aussie dollar is at multi-month lows. Gold is tremendously weak. I think the U.S. dollar surprises to the upside. UUP will go up; I think it rises with rates, and I own it in my fund.