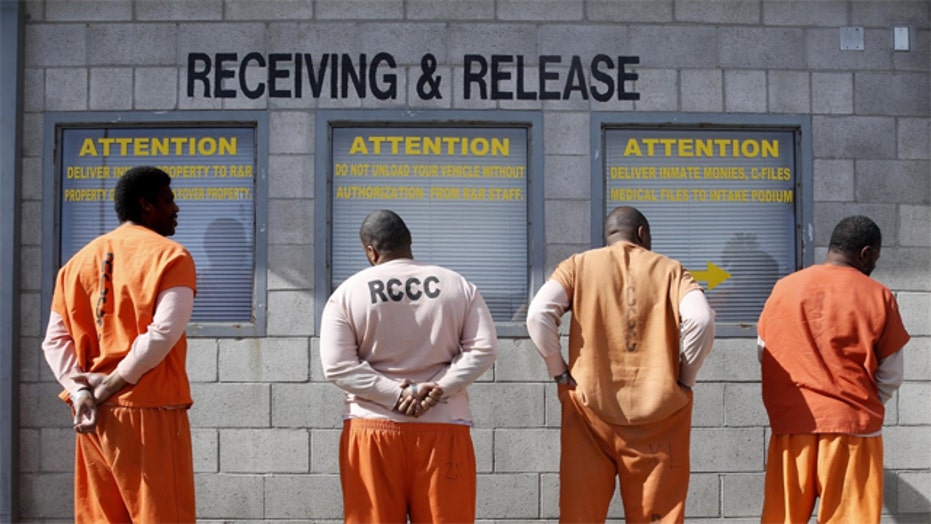 WAYNE ROGERS: It's crazy. You've got 193 homicides, over 1,000 aggravated assaults, 300 kidnappers, 400 sexual assaults. This is nuts. The key word to this, by the way, is "illegal" aliens. These are illegal aliens. If you start with the word "illegal", you've got nowhere to go. That's indefensible.

JONATHAN HOENIG: Do you believe that an American who commits a crime can serve his or her time, Eric? These individuals served their time. Immigrants, whether you want to call them illegal are not, are good for the economy. Criminals are not good for the economy, but immigrants are. They expand the economy. They produce, they buy, they shop, and they work. I think we benefit from immigration. Criminals, however, are destructive and that's why these people did their time. Many of them by the way, had traffic violations. And, Eric, to say you want to round them up and deport them I don't think is just totalitarian and draconian, but it's also bad for America's bottom line.

MICHELLE FIELDS: This is putting the American people at risk. These people came illegally.

JESSICA EHRLICH: Most of these people are in the process of being deported. You've got a problem here that's going on, which is why we need comprehensive immigration reform happening in this country after almost 30 years.

JONATHAN HOENIG: The key word here is "demanding". Only robbers make demands. These people think their work is worth $15 an hour, they should go out and find a job that pays them $15 an hour. People have no right to a job at any wage. In fact, the higher minimum wage is discrimination against exactly these low-skilled people. It doesn't allow them to begin to build the skills to earn that higher wage. This is literally shooting themselves and the economy in the foot at the same time.

MICHELLE FIELDS: These people are demanding more and more money, but they don't realize if that happened their jobs would be cut. If the minimum wage were to go up to $15 an hour their jobs would be cut, or they would be replaced by iPads, by tablets. They won't need them anymore. If these people spent just as much time improving their job skills as they did going out there and protesting, they would be able to get a better job that paid more money.

JESSICA ERLICH: I think it [the money] would allow them to actually be able to buy meat for their own families and be able to feed themselves and their loved ones. That's what we're seeing right now. This argument really doesn't make much sense to me. But you're talking about "okay the price of meat is going up, people are paying more at the grocery store, but let's not pay wages that are commensurate to the cost of living". That creates an entire class then of people who are more and more on the poverty line. It disincentives people, because if you're working two minimum wage jobs and you still can't even feed your family...

WAYNE ROGERS: The fundamental problem here is you're talking about a free economy. In a free economy, labor had the same competition that everybody else has. If you are capital conscious, you have competition. If you're production conscious, you have competition. Labor has competition. If I can buy labor at $10/hour or $5/hour or whatever it is, that's what should be in a free economy. It has nothing to do with "everybody is entitled". This is not an entitlement government; this is not an entitlement society. You compete. If you compete and you compete at a certain level, that's the fair price. That's how you arrive at it.

CRITICS: GOVERNMENT IS MAKING IT EASIER FOR COMPANIES TO SPY ON SCHOOLCHILDREN

MICHELLE FIELDS: We're living in 1984 right now, and big brother isn't just the government. Big brother is the government, it's private companies-oftentimes working together. Republicans and Democrats in Washington DC are for once united. They're united against the American people when it comes to the issue of privacy. This administration promised to be the most transparent ever, and instead they're spying on us. they're allowing private companies to spy on us, and they're working together to trample on our rights and freedoms.

WAYNE ROGERS: It should all make you mad because the fact of the matter is they're taking this information and then selling it. That's what makes it trashy. They're gathering it under the guise of saying "we're doing something wonderful educationally for your child", then they turn around and sell that for commercial reasons. The worst of all is to let the federal government have that information. It's intolerable.

JESSICA ERLICH: I think this is one time that we can all agree that regulation of private industry and business is an important thing to protect the American consumer. Right now it's a small step. It's going to take a while to get implemented, but you do have senators from Massachusetts-Sen. Marky and Sen. Hatch-who have come together and have brought forth bipartisan legislation to put some controls on the current organization that you mentioned from the 1907s. but we've got to do something going forward in order to protect children. This information is already out there. It can be sold going forward, it can be used to target them into their futures.

JONATHAN HOENIG: How many bad ideas have come forth because we've said "we've got to do something to protect the children"? God, I've heard that a million times. Of course the government isn't doing anything to protect the children here. Who's doing this? Government-controlled schools. If you had a private school system you could choose to fund or send your kids to schools that didn't engage in this type of analysis. I think you're wrong to call it spying. Data analysis has been around for decades, and I many cases it actually helps a child in an educational environment, because it can tailor that lesson to the child's needs. The problem is the fact that schools are government-run.