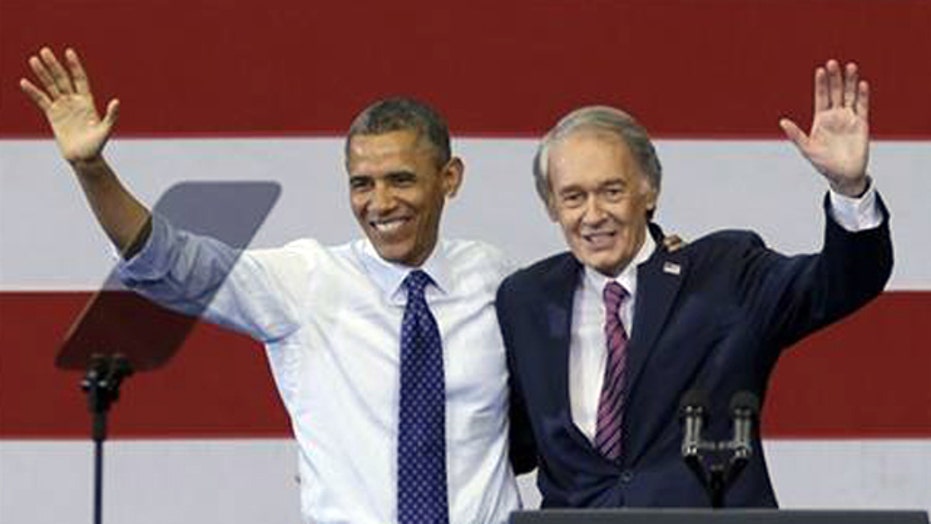 This is a rush transcript from "The Kelly File," April 29, 2014. This copy may not be in its final form and may be updated.

MEGYN KELLY, HOST: We're learning details today of a new proposal that would empower the feds to scour the internet, TV and much, much more for so-called hate speech. And then do something about it. Democratic Senator Ed Markey is pushing this bill mandating monitoring of anything that the feds suspect may encourage hate crimes.

Guy Benson is the political editor for Townhall.com and a Fox News contributor. And therein lies the problem Guy, who gets to decide what's hateful on the internet and what will they then do about it under his proposal?

GUY BENSON, TOWNHALL.COM POLITICAL EDITOR: Those are the two big questions and we don't have the answers to those questions which I think is the root of what's troubling about this. I mean, Megyn, you and I both operate in the arena of words and ideas. Right? Freedom of expression and thought. That's the coin of our realm. So I really think it's the duty of journalists and people in the media to look at any potential instance of the government coming in and trying to monitor or potentially criminalize thoughts and words. We have to be all over that and ask tough questions and I think Senator Markey ought to be answering some of those questions in the coming days.

KELLY: Senator Markey wants this group, this obscure federal agency as the Boston Herald put it to scour the online sources, TV, radio, and so on for any speech it finds threatening and he wants them to do it in connection with the Department of Justice, the U.S. Commission on civil rights and then file a report to Congress on what out there is potentially hateful and could lead to hate crimes.

This is clearly big government sticking its nose into people's speech and their thoughts. We just pushed back on a similar proposal that we saw from the FCC that the Feds had to shut it down. So, what is Senator Markey thinking?

BENSON: I don't know what he's thinking and I would love to know what he's thinking. And there's a few issues. You've been touching on this, Megyn and you're completely right about this. When the government gets involved, there's no criteria here in the bill. What's the template? What's the -- you know, when you go down through and check the boxes, what counts as hate speech and who makes those determinations. Well, as you say it's this abstruse group that no one has ever heard of buried within the bureaucracy of the federal government.

And Markey and his defenders, they will say, well, the bill says, everything has to align with the first amendment. We're making sure the first amendments protected, but who is going to hold that agency accountable if abuses occur because we've seen, quite frankly, Megyn, some abuses recently from unaccountable federal agency doing things to target Americans who say and act in certain ways that may be politically inconvenient for certain people. We've just seen this movie with the IRS.

So expanding the potential targeting and, again, we don't know the exact nature of this is questionable to say the very least.

KELLY: What are the chances of this going anywhere in the current Congress? I read that he has no co-sponsors, but it has more support I guess in the House than it does right now in the Senate.

BENSON: The Senate can't seem to do very much of anything. And so you've got that. On the other side the House of Representatives has co-sponsored in the House is a back bencher from New York so the chances of this seeing the light of day in the Republican held House are slim.

KELLY: But it just gives you a window into the thinking by some --

BENSON: That's exactly right. That's exactly right and it's not just that, Megyn. I think what becomes difficult for people who are First Amendment advocates on these types of questions is the other side, it's easy and very tempting to demagogue. If you raise questions about this, they can say, well, aren't you being an alarmist. Or are you being an apologist for hateful speech or hateful behavior. And then you get awfully defensive awfully quickly.

KELLY: It takes a lot to get to your speech to a level where it's unconstitutionally impermissible. Guy, good to see you.