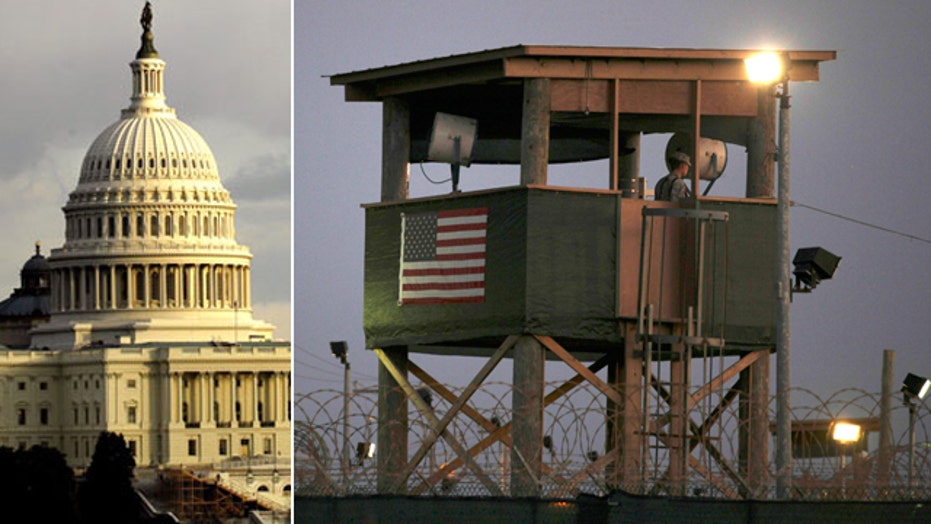 Panel debates whether Guantanamo Bay should remain open or close down

Gary B. Smith: Look, I think there's a big difference. The man sentenced, the animal sentenced to death yesterday committed a crime here. Most of these, if not all of these Gitmo people, committed crimes elsewhere. For me, Gitmo does several things. A, it sends a message to these terrorists. It does not cut costs any bit whatsoever. And it really sends the message to the terrorists that you're not going to be in a very nice place going forward. I say you keep it open.

Richard Fowler: Well, we should close it for a couple things. Number one, the Constitution. Every person, whether you are a foreigner, an American, you're an immigrant, you have the right to habeas corpus and our Constitution has created perfect justice system. And we saw that in Boston where this individual was sentenced to death. And I think our justices can try all these individuals. No need to keep them -- why would we take away American values when dealing with the individuals? That's what sort of is amiss to me. And that's the problem with Guantanamo Bay overall.

Hadley Heath: I'm sympathetic to the criticisms of what happens at Guantanamo Bay. It's worth looking into, absolutely, but bringing the detainees to US soil raises a whole bunch of legal problems, logistical problems and something the majority of Americans don't want to see with Gitmo closed.

John Layfield: Do, but I don't understand why we are talking about the problems at Guantanamo Bay and saying people deserve certain right. Our drone policy doesn't give anyone rights. We don't have a right to process, we have -- we have killed American citizens overseas without a trial, but yet somehow if we get these people in the battlefield, it's OK just to kill them indiscriminately? But if you put them in Guantanamo Bay somehow that's bad? I'm seeing mixed messages all over the place. This to me I about cost. It's a matter of, we're not talking about giving the guys access to lawyers, we're not talking about trying these guys in the United States any more than we tried Khalid Sheikh Muhammad. We moved him to the United States to a super max prison like the one in Florence, Colorado, and we put them there. It's so much cheaper. The same thingets done but the cost is a fraction of what it is in at Guantanamo Bay.

Gary Kaltbaum: Costs do not go down if you shut down Guantanamo. We went from more than 700 prisoners down to a little over 100. We have the same amount of persons and they will just be shifted elsewhere. The other part of the equation we keep hearing, well, Guantanamo causes people to become terrorists. I don't think so. Terrorists want to be terrorists on their own. I see no reason why this has to be closed.

Hadley Heath: I'm not against high-speed rail and think it can be a safe and effective form of transportation. But I'm against government-run high-speed rail because the government doesn't do a very good job determining what is profitable and what is cost effective. This should be an arena where the private sector can lead and we don't see a lot of investors jumping in to build high-speed rail projects. Occasionally you do but most of the time you don't because they don't see the profit potential there.

Richard Fowler: It is worth it. Our friends overseas are committed to this. Every billion dollar you spend on transportation you create 34,000 jobs. Number two, you get folks quicker, faster and safer. And beyond that, number three, it's a great way to make sure that America stays the number one world in the leading economy. I think it's a good ideal all around. Sadly, we can't get Washington politics to get together and really try to create high-speed rail in America. We're the only developed country in the world without real high-speed rails. It's about time we get it.

Gary B. Smith: Here I thought Richard and I had kind of a kumbaya moment and were bonding, but that's all fallen by the wayside now with his defense of rail. I'm kind of with Hadley on this and will give examples. I think Richard is completely wrong. If you include subsidies that Amtrak gets plus the high cost of their ticket, they are four times as expensive as airline travel. You look at how many people really want Amtrak. The average person drives 15,000 miles a year. They are on Amtrak 20,000 miles a year. As far as this whole energy and green stuff, Amtrak alone pollutes more than buses. It's about equal with cars driving inner city. Hold on one second, hold on. To get back to Hadley's point, if there is a market for it, as Richard says, then it should be developed by private enterprise. That's how the rail system in Europe started, Richard. We can do it again over here.

John Layfield: In certain places it would be beneficial, but across the country, absolutely not. We already have high-speed rail. If you want to get from Denver to Las Vegas or Dallas to Phoenix, you take Southwest airlines. That's a pretty quick service and it's pretty cheap. The problem is we do need infrastructure spending. And you can't trust politicians with money. 37 percent of recovery act went to unfunded pension liabilities. Up to 40 percent of the gas tax goes to special projects. You cannot trust politicians with money. And that is the problem with our infrastructure spending.

Gary Kaltabum: California first said $30 billion. Now it's $68 billion. Which basically means $100 billion. They already admitted they need taxpayer subsidies up to a billion dollars a year and it always falls on the taxpayer. If you notice as said, don't see private companies jumping all over this because they know it's a money loser. Think the big dig in Massachusetts. It was supposed to cost $3 billion and ended up $15 billion and nine years too late. This makes absolutely no sense. It's a great idea. Get you there fast, go on the train, and I love trains, but a big money loser

Gary B. Smith : Absolutely, Brenda. And unfortunately we need to start right back at the basics. And I'm talking Constitution because right now we've given the fox the keys to the hen house. The elected officials rely on the pork to keep getting elected. They are not going to want to change it. We need a balanced budget. We need a flat tax and need to start some kind of amendment in there that we just can't keep raising taxes to pay for all this pork.

Richard Fowler: That is indeed true. Now, don't get me wrong, I think there's wasteful spending that happens in our government. So agree on that point, but there are meaningful projects we have seen pork create. But the Internet and a lot of other things. That being said, I think there has to be a balance here and balance is going to be key. What the government nee to invest in is research and development, but beyond that we have to make cost savings somewhere even though it is negligible and a drop in the bucket.

Hadley Heath: I'm a little cynical and think pork will always be a feature of our government. But I think we can minimize it. And one powerful tool is knowledge. Knowledge is power. If we know what our lawmakers are up to and have more information available to us today in part because of the Internet, we can shame the lawmakers into making the right decision being more responsible with our money and not wasting it.

John Layfield: Look, this is ridiculous to me. People say this is a drop in the bucket or this surrounding error, stealing is stealing. If you steal a little money, you will steal a lot of money. Surprise, surprise. The general says we don't need anymore. We have 2,000 sitting in a desert in California. We keep building them, why? Because there are supply chains al over the country buying votes. They are stealing our money. Somebody, please, prosecute somebody.

Gary Kaltbaum: Let's see. There is a cesspool between lobbyists, government, politicians, you name it. This is small potatoes compared to the big picture. And government has doubled in size since the year 2000 where we are $18 trillion in debt and there's no shame by any of the politicians. We can talk all we want. They are just going to continue to do this over and over again. Some of this is comedic but it is sad because money could go to good things, at risk kids and things important, not salmon.