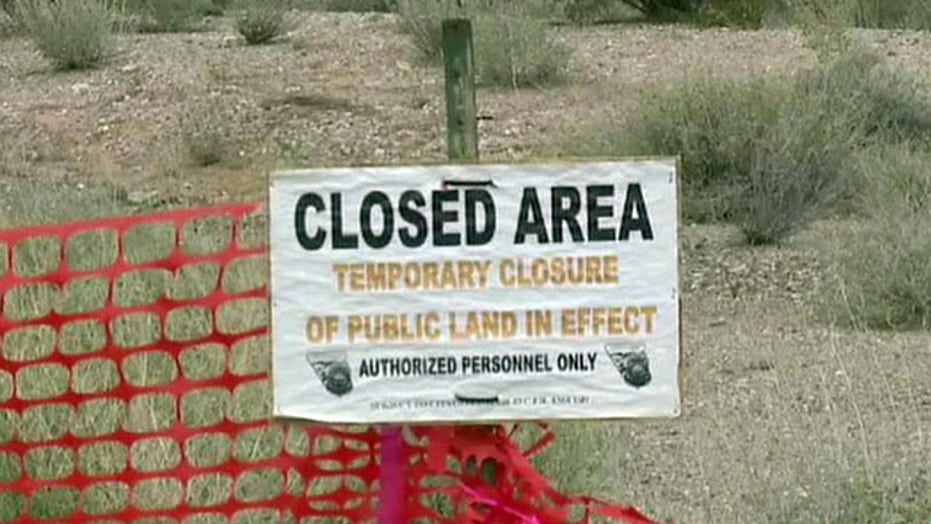 This is a rush transcript from "Hannity," April 9, 2014. This copy may not be in its final form and may be updated.

SEAN HANNITY, HOST: My next guest, Cliven Bundy, is a Nevada rancher waging a battle against the federal government over his cattle grazing on public land which is overseen by the Bureau of Land Management.

This all started in 1993 when the government declared the land habitat for the federally protected desert tortoise. Following that move, Bundy refused to pay new grazing fees and continued letting his cattle graze on the land. He argued that his ancestors worked this land since the 1870s, long before the Bureau of Land Management was formed, granting him the rights to the property.

Then in 1998, the Bureau of Land Management revoked Bundy's grazing permit. A federal judge issued an injunction ordering the cattle off Bundy's land, igniting more than a decade long series of legal filing.

Last year the judge authorized the government to impound the cattle, and just this past weekend that impoundment began. And as of Monday, authorities seized 134 cattle, many of which belonged to Bundy. He is now threatening to wage a quote, "range war" with federal officials and say he's not backing down.

Joining me now to explain the situation for himself is the Nevada rancher Cliven Bundy. Cliven, welcome to the show.Thanks for being with us, sir.

HANNITY: It is interesting. Your cattle -- this is public land. It's not being used. In my mind, and I'm not a rancher, but I would think the federal government would be thankful because you're cutting the lawn for free, and they're charging huge amounts of money to let your cattle graze there with these fees?

HANNITY: Let's take a look at where we're talking about here. We have an 80-mile look here as we go to the HANNITY big board. And then we also have this issue of the timeline. This all started in 1993 as we went through the series of events that have been unfolding there. This has gone on for a long period of time. Now, the money that the federal government claims that Cliven owes them. Look at this fee that they have. They are saying you owe $1 million in grazing and trespass fees. Tell me if I'm wrong, this land is not being used by them, is it?

BUNDY: No. Let me explain the use of the land a little bit. This is south, you know, southwestern desert. There is a renewable resource out here that can only be harvested by livestock. And what I do is I -- my livestock eats the grass, prunes it, and it uses that forage to make an edible commodity for we the people of the United States. So when you get a piece of meat on your table, remember where it come from.

BUNDY: That's what we do. We turn this resource into a renewable -- a usable commodity good for man.

HANNITY: By the way, when your cattle graze there, that keeps the price of meat down for every American consumer.

Let's take a look, American land owned by our government, we're talking about 28 percent of U.S. landmass, up to 640 million acres the government owns here -- which by the way, why do they own all that land?

Let me ask you one more question, Cliven. You talked about a range war with the federal government. There is a lot of people out there, now that they are taking your cattle, that are fearful this is another Waco situation. Ruby Ridge has come up in some articles. What do you mean by range war? How far are you willing to take this?

BUNDY: Well, you know, my cattle is only one issue -- that the United States courts has ordered that the government can seize my cattle. But what they have done is seized Nevada statehood, Nevada law, Clark County public land, access to the land, and have seized access to all of the other rights of Clark County people that like to go hunting and fishing. They've closed all those things down, and we're here to protest that action. And we are after freedom. We're after liberty. That's what we want.

BUNDY: My statement to the American people, I'll do whatever it takes to gain our liberty and freedom back.

HANNITY: All right, we'll follow the story closely and we'll watch what the federal government does. Thank you for being with us, sir. Appreciate it.