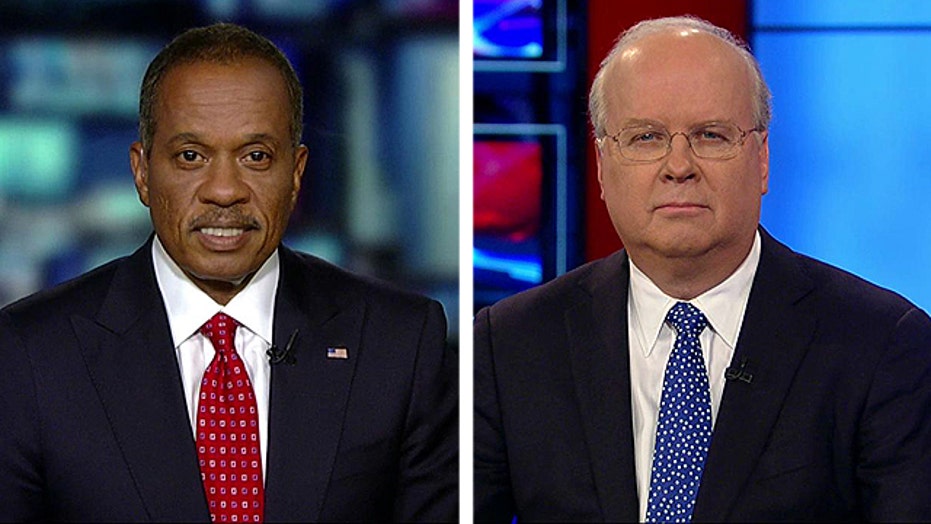 Is it appropriate to politicize the shooting?

This is a rush transcript from "Hannity," September 17, 2013. This copy may not be in its final form and may be updated.

SEAN HANNITY, HOST: And joining me now to talk about the left's efforts to politicize the tragedy, Fox News political analyst Juan Williams, former Bush adviser, Fox News contributor, in studio tonight, rare appearance, the one and only Karl Rove.

Juan, the sequester was Obama's idea, number one. Number two, the sequester had nothing to do with this, nor was it an AR-15 as the Daily News as Dianne Feinstein and others said. So why is there always this race to politicize the tragedy in advancing agenda?

JUAN WILLIAMS, FOX NEWS POLITICAL ANALYST: You know, I don't think there is a race to politicize it except coming from the right, Sean. And the race that politicizes from the right is, "Oh, don't bring up guns, don't mention guns, guns have nothing to do with it. This is all about the fact that this guy was a nut job, he was crazy, and that is the problem. And so let's talk about mental instability and the need for greater health care for people who are, you know, under mental treatment. But let's not talk about guns. " That's the political effort.

HANNITY: We know that this guy had a histories, he had no business having a security clearance to the degree that he had, based on his history, and the sequester had nothing to do with it.

WILLIAMS: And no business being able to buying a gun in the country, right?

KARL ROVE, FORMER BUSH ADVISER: First of all, the mayor of Washington, D.C., ought to be counted upon to attack the sequester, because the Washington, D.C., economy depends upon an ever-bigger federal government. I thought it was outrageous, the sequester had nothing to do with the security status at the base. He had an ID, he worked on the base, he displayed his ID, he got access.

Second of all, I want to correct Juan on one factual thing. It' wasn't the National Rifle Association that was heard from yesterday. It was the president of the United States, Dianne Feinstein and other advocates of gun control. The National Rifle Association has a policy on days like this, of respecting the situation, by not turning it into politics. And Dianne Feinstein in particular was really over the top in her comments about this.

ROVE: And again -- Juan, I didn't interrupt you. Please let me finish.

WILLIAMS: Oh, I was just going to join the conversation.

ROVE: Well, OK, go ahead and join the conversation, and then I'll finish my point, raise your hand if you want to speak, and while I'm talking in the future and I'll respond. OK, go ahead, Juan. Thirty seconds to you.

ROVE: And then I'll come back and finish my thought.

WILLIAMS: Yes, yes, sure, I just wanted it to be a conversation.

But my point to you is, the reason that the NRA didn't say anything yesterday is they knew they would be on the defensive in the face of 12 people being dead. And every day, they speak loud and clear, so loud that the Congress can't hear the American people say, "What about reasonable gun control in this country?"

ROVE: Well, first of all, Juan, it is nice of you to suggest that only people who don't listen, only members of Congress who don't listen to the American people oppose gun control. Maybe they're opposing gun control because that is what their constituents want them to do.

And second, I noticed yesterday, and this was the point I was going to make, Juan, so let me finish it belatedly if you don't mind.

ROVE: I think the conversation -- no, no, it's you who is raising your hand my friend, you.

ROVE: The conversation would have been different I think yesterday, had people step forward and said, "You know what? This is another instance where somebody with a record of mental illness has been able to purchase a gun, so maybe we ought to focus and find common ground on what can we do as a society." We have these probations in law called HIPA, the Health Insurance Privacy Act, that keep people from being -- who have mental illnesses, from being tagged and kept from the purchase of weapons.

But again, we didn't have that. We got, "We have to stop having AR-15s," when an AR-15s was not involved. And once again it happened in an area, a part of the country with very serious and severe gun laws in place.

Let me just quickly say Karl, what you have got here is a situation where they don't say anything, the NRA, because they understand that reasonable, thoughtful Americans, a clear majority in all the polls, believe that you can do things that are just common sense, like expand background checks to online purchases and gun shows. You can do this.

WILLIAMS: And Americans would buy into the idea of handling psychiatric treatment is part of a larger agenda, but not by itself.

HANNITY: One at a time. All right. Karl.

ROVE: Look, I am glad you sit in the circles, the leadership circles, the board of directors of the National Rifle Association and can explain to us why they do the things they do. I take them at their word that they think it's appropriate on a day like this not to politicize it, and this was politicize by the president of the United States making inappropriate comments, and by Senator Feinstein immediately going out without knowing the information at hand, and rattling on, and by the mayor of -- the mayor of Washington, D.C.

So, you know, we're not going to agree on this, you think it was fine and dandy for them to do it. I don't think it is.

HANNITY: All right. Let me ask you this question.

ROVE: And most of the American people don't either.

HANNITY: What about the president who is making all this political hay, and attacking Republicans just hours after this happens? Juan, is there not any inappropriateness there? And then we have Jay Carney go out once again, he's going to bypass Congress, and he's going to use executive orders, what he can't get done legislatively he will just take the power upon himself. That is problematic for something like the Constitution, you know.

WILLIAMS: Well, of course, look, it is not a matter of doing anything in defiance of the Constitution. I'm sure you, Sean, would be all over the president, and everybody would be because that is just not American.

WILLIAMS: What this is about is Republican obstructionism, and the NRA with all of their big money, shutting people up, intimidating people, having recalls like they did in Colorado where people can't get reasonable steps to protect themselves.

ROVE: Juan, with all due respect, if people disagree with you it is because they have been bought off and been pressured by somebody else, not that they can have a legitimate disagreement with you. And I would also remind you this. Jay Carney said the president is going to take executive action, but tonight in an interview, the president said, "I have no more executive action than I could take." You may want him to take some executive action, but even the president of the United States admitted he had to come to the limits of what he could do on his own authority and he needed the people's representatives to pass it. And the people's representatives are going to make a decision on this based on their informed opinion, not on the basis of supposed pressure.

WILLIAMS: They'll make a decision based on the NRA's money --

HANNITY: There are real solutions about being able to -- first of all, our background check system is not working. We have four million people with top security clearance, let's deal with that problem. And what about what Karl mentioned about the mentally ill. Should we have the ability --

WILLIAMS: That's fine. Not yet.

ROVE: That is not accurate, Juan --

WILLIAMS: It is accurate! Go look at the polls! You know how to read a poll.

ROVE: I have looked at them, Juan, and if you write them in a certain way, which was not reflected of the legislation that Dianne Feinstein and Harry Reid were pushing at all.

WILLIAMS: Karl, you're spinning so fast you can't even keep straight.

HANNITY: You didn't raise your hand. Karl got the last word, he had two hands up.

All right, we got to go.

WILLIAMS: All right, I'll give him that, but he is spinning, I'm telling you.

HANNITY: All right. No, he's -- I'm actually in agreement with him. Thank you.