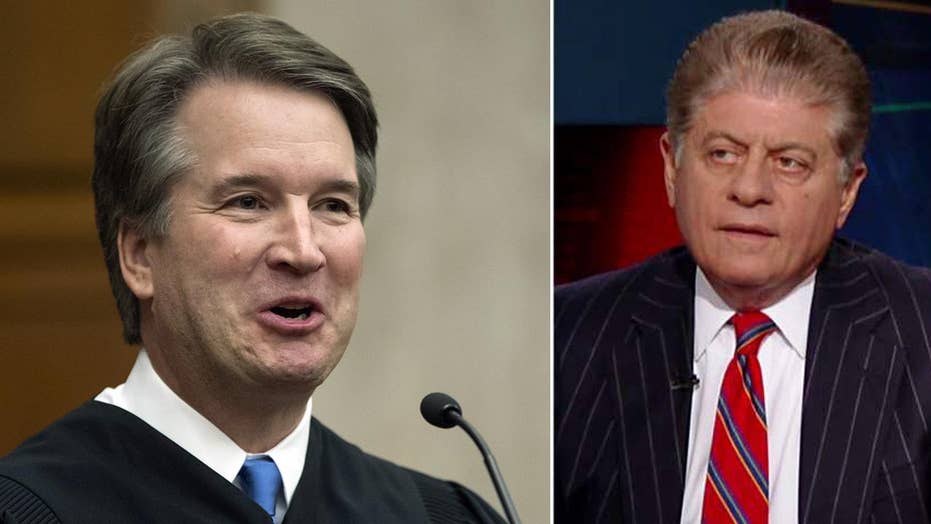 Napolitano: Dems conclude it's lost cause to block Kavanaugh

This is a rush transcript from "Your World," September 4, 2018. This copy may not be in its final form and may be updated.

NEIL CAVUTO, HOST: Again, what's the issue for a lot of these Democrats, some might call it just a postponing move or just anything to delay this nomination, even past the November elections, so that they might have a Democratic Senate and then obviously this nomination would be all but torpedoed in that event.

Hard to gauge here. But they're making the issue here all of this paperwork that dates back to the time Judge Kavanaugh was a lawyer in the Bush administration and oversaw all documents that passed through that White House, that administration, as the staff secretary.

Judge Andrew Napolitano here with us on how is sort of reading all of this.

Now, there's a lot of information there, Judge, that is best left not addressed to the public, because a lot of it is privileged information. But Democrats are saying, until they get it, there's really no reason for them to go on with this, right?

ANDREW NAPOLITANO, FOX NEWS JUDICIAL ANALYST: I think the Democrats have concluded that this is a lost cause, that is, the numerical effort to block his confirmation, that the Republicans have enough votes, unless they can find something in documents to pry lose some of those votes.

And there's two things they're looking for. They're looking for Kavanaugh as a young lawyer, not as the president's secretary, but as a lawyer working for Alberto Gonzales when he was the White House legal counsel, signing off on torture. That would probably lose Senator Rand Paul.

They're also looking for comments made by him in memos that they think he made, but they haven't seen, which is critical of Roe vs. Wade, that would probably lose Senator Murkowski and Senator Collins.

If they can't do that, then their goal, since there's really very little attack him for -- his qualifications are so extraordinary, his experiences is so vast, his opinions as a judge are public, and anybody can read them - - their goal is to attack the process and say, aha, there must be something in these documents. Otherwise, why would you be keeping them from us?

That's sort of a way to gin up their base against the president and against the Republicans. That's how I read what they did this morning. They were terribly rude and awfully impertinent to Senator Grassley.

But that sort of tough old Iowa farmer that he is wasn't going to let them get under his skin.

NAPOLITANO: I know I'm going to hear about it because I called him old.

But it's interesting, too, because he has quite a paper trail, almost too much of one...

CAVUTO: ... which can go the other way for you, right? I mean, and that gets in the way too, right?

NAPOLITANO: Three hundred and nine published opinions, a half-dozen law review articles, over 100 speeches, where every word was recorded verbatim.

And I'm talking about speeches to law schools and legal groups, not political op-eds, but serious, in-depth discussions of the law. Really, everything they want to know about him is out there.

But if they can create the suspicion or the fear that the White House is hiding something about him, then they can attack the process. And that gins up their base, even though they know they're going to lose and he will be confirmed.

CAVUTO: They're guaranteed no-votes regardless, it would seem, the Democrats.

CAVUTO: The Democrats are guaranteed no-votes, except these ones that you mentioned in states that Trump won, where it could be a little bit different.

Now, if all the Republicans vote to confirm him, then Chuck Schumer releases the Democrats to vote in favor him, because it will help their reelections. But if it comes down to one or two votes, look for the Democrats sticking in lockstep.