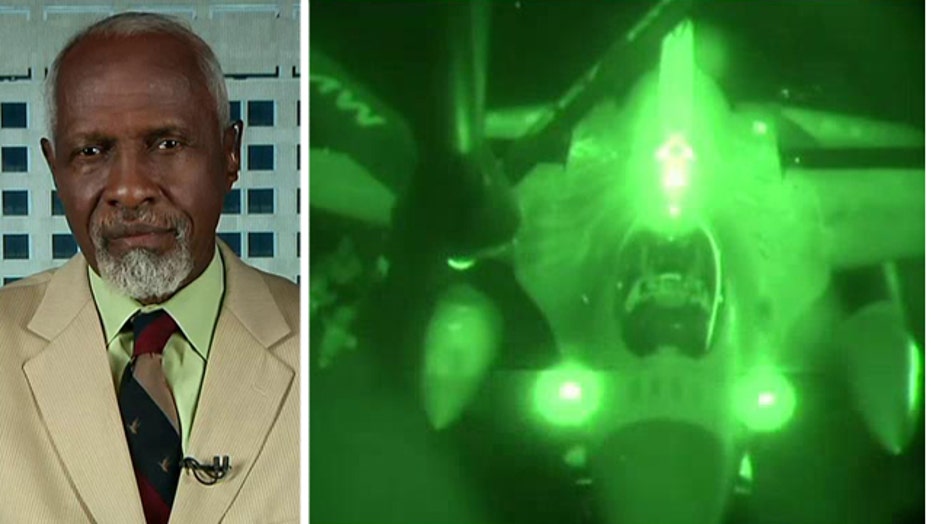 Muslim world's reaction to US airstrikes against ISIS

This is a rush transcript from "Hannity," September 23, 2014. This copy may not be in its final form and may be updated.

SEAN HANNITY, HOST: And welcome back to "Hannity." Reaction has been pouring in from all corners of the globe after last night's air strikes in Syria. But how is the Muslim world responding?  Joining us now to help answer that question. Indianapolis area, Imam, Muhammad Siddeeq is with us how are you, sir?

MUHAMMAD SIDDEEQ, NUR-ALLAH ISLAMIC CENTER: Fine sir, how are you?

HANNITY: Is it a good thing that we're bombing this group known as ISIS that beheads and rapes and, you know – and pillaging people and says, convert or die, is this a good thing?

SIDDEEQ: It's never a good thing when human beings are being killed, Sean.

SIDDEEQ: I think they need to be taken out but it's never a good thing that you have to use killings, I'm never going to be supportive of trying to kill to solve killing.

HANNITY: OK. People are saying, people are killing other innocent people, raping women, killing children, and threatening the United States of America, and beheading innocent journalists so you really can't have a negotiation with them, you have you to kill them, right?

SIDDEEQ: Well, I don't know if you can have a negotiation, all I'm saying is there has to be a better way. And it doesn't start right there.

HANNITY: The guy, let's say the guy that beheaded two Americans is part of ISIS, what negotiation do you have with a person like that?

SIDDEEQ: I don't have any negotiation with him. I think if you can get a hold of him, he can receive exactly what he put out.

HANNITY: OK. So, that is what we're doing. ISIS is now saying that they're at war with us. They're killing Americans, they're threatening us in New York and they want to raise the flag of Islam in the White House.  So, they are at war with us.

SIDDEEQ: Well, OK, but still, 500 pound bombs dropped into space. I mean, any time there is a chance of killing innocent people, I'm not comfortable. I'm not second guessing the president. And I support what our government has to do, but I'm telling you, anytime you have to resort to killing, a mass killing of individuals trying to solve the problem of killing, I don't believe you're going to solve the problem. All you're going to do is create more killing down the road. And I just don't think that's the answer.

HANNITY: Didn't we learn a lot in World War II when we defeated the Nazis and Tojo's Japan? That was a good thing, right?

SIDDEEQ: No. It wasn't a good thing.

HANNITY: It wasn't a good thing to defeat Hitler?

SIDDEEQ: Oh, it was a good thing to defeat Hitler.

HANNITY: Yes. But those that kill in the name of Allah, those that tell their kids strap a bomb on yourself and go kill innocent people and you get 72 virgins in heaven, those are people that have hijacked your religion, aren't they?

SIDDEEQ: There is no hijacking or anything that God reveals, you can hijack the minds of people --

HANNITY: But they're radical Islamists that are killing in the name of their religion.

HANNITY: They're radical Islamists. They're using the Koran to justify jihad, holy war against the infidels, against the Christians and Jews that they say their holy book says they shouldn't be friends with.

SIDDEEQ: OK. That is like using a screwdriver to try to fix the moon. So, does that make it legitimate and make it right?

HANNITY: No, I'm asking, I would think that, like for example, I'm a Christian. If anyone was doing this in the name of Christianity, I would speak out loudly against them, for trying to hijack my religion. I would hope that you would speak out, and say to your fellow moderate Muslims, we've got to stop these people that are killing not only Christians and Jews but also other Muslims

SIDDEEQ: We are speaking out by working with good, solid Christians, good solid Jewish people. We're working feverishly to stop the insanity that's going on in the world and we agree with you like that, Sean.  We're agreeing with you. We're not against this. We're Americans and we support our country.

HANNITY: All right. I appreciate it Imam, thank you.

SIDDEEQ: Thank you for having me, Sean.

HANNITY: You bet, any time, right after the break.