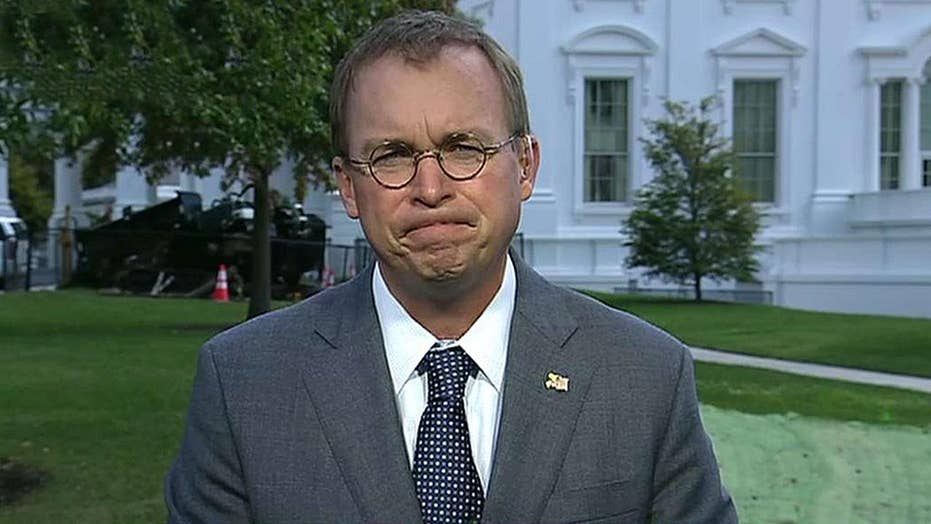 Mulvaney: We want biggest tax reform we can pass into law

White House budget director speaks out on 'Your World'

This is a rush transcript from "Your World," September 7, 2017. This copy may not be in its final form and may be updated.

NEIL CAVUTO, "YOUR WORLD" HOST: Man, oh, man, it was all a lot of Republicans were talking about today, the president shockingly reaching across the aisle, dealing with Chuck Schumer and Nancy Pelosi to score a deal that would call for postponing this whole budget ceiling debate until -- until, what, the middle of December, and stapling it to a relief package for Harvey victims.

But the fact of the matter is, the budget director said it saved ground for a lot of good things the president still wants to do.

So, no, I think we continue to work with both folks. Certainly, the media has focused the fact that he's actually met with Mr. Schumer and Mr. Pelosi-- excuse me -- Mrs. Pelosi. But certainly we're talking to everybody on both sides of the aisle, because we have to.

CAVUTO: But you're also one of the biggest fiscal hawks I know, and you don't like waste anywhere you see it.

It just seems odd to me, sir, that in agreeing to increase the debt ceiling that attached to it was a spending measure, albeit an important one, for emergency relief. But, nevertheless, that could have been just a clean bill, a clean vote, and it would have gotten bipartisan support anyway.

So, are you troubled that this sets the stage for similar such attachments, in this case for spending, not for cutting that spending?

Look, actually, I think one of your basic premises there, Neil, is not entirely accurate.

We actually sent a letter last week to the Hill asking for the additional spending, what we call the supplemental spending for FY17.

MULVANEY: And in that same letter said, and, by the way, we think you need to address the debt ceiling at the same time, because we were cutting it so close anyway on the debt ceiling.

I think Secretary Mnuchin has been on the show several times saying how close we were cutting it already just getting to the end of September, when the reality is, September 14, 15, right before those tax payments come in, was actually cutting it close as well.

MULVANEY: So, we think the responsible thing to do was to look at the supplemental spending and the debt ceiling at the same time.

CAVUTO: Director, it's thought that the president might secure more Democratic support than would normally be thought of for this tax plan, whatever it is. And it has tongues wagging that maybe, maybe that's because it leaves out provisions that, let's say, liberals or Democrats would find objectionable.

A tax cut for the wealthy might not be in there, that the lower taxes for corporations might not be as low as was originally talked about.

Can you outline any of that?

MULVANEY: I can say what we have said 100 times before. Our policies of the administration have not changed.

We want the biggest, most aggressive tax cuts, tax reforms that we can pass into law.

CAVUTO: For everybody, Director?

We want stuff that can pass into law that will help get to us to that 3 percent sustained economic growth that is the target for this administration.

CAVUTO: The reason why I mention it, sir -- I'm sorry to jump on you there...

CAVUTO: ... is that your definition of what would be an adequate tax cut for corporations might not be jibing with the speaker, Paul Ryan.

Here's what he said on the corporate tax rate. And I want you to react to this, Speaker Ryan.

REP. PAUL RYAN, R-WIS., SPEAKER OF THE HOUSE: The numbers are hard to make that work. He obviously wants to push this as low as possible. I completely support doing that.

But at the end of the day, we have got to make these numbers work. I think our goal is to be at or below the industrialized world average, and that's 22.5.

CAVUTO: All right, I should put that in some context.

The report was that the president wants to, maybe you want to, lower that corporate rate to 15 percent from roughly 35 percent now.

CAVUTO: It would be still much lower under Paul Ryan's thinking, but not nearly that low. What do you think?

MULVANEY: I think what you are seeing, Neil, is actually the way the law is supposed to get made.

They are going to mark up a bill. And we will continue to advocate for the biggest reforms and the biggest reductions that we can possibly get. At the end of the day, the president doesn't get to make law. The House and the Senate do.

So, we will be working with them, as we have, to try and get the best possible package that can pass. I just think what's being lost is how many things we agree on at this point in the tax policy. That two- or three- pager that the big six put out a couple of weeks ago was actually quite noteworthy in the number of places that we agreed on, and things that, for example, the border adjustment tax was out of the picture at that point.

We all agree to try and get corporate rates down as much as we possibly can. So, I think it's better to start focusing on what we agree on and not the things that might divide us. That's the way we get the best piece of legislation we can.

CAVUTO: Director, is it fair to say, as I think Treasury Secretary Mnuchin hinted -- I'm just saying hinted -- that the wealthy are not going to share in this tax cut, they might see their rates cut a little bit, but with offsets by limiting deductions, et cetera? They might not be part of this?

Now, by the way, they might be fine with that if everyone else is getting it. But is it your sense in the end that that is what we are looking at?

MULVANEY: Well, again, I don't know what we are looking at in the end, because this is going to go through the process.

CAVUTO: But you know what is being proposed in that building behind you. Right?

MULVANEY: Don't worry. I'm not going to dodge your question. I'm going to tee that up and then say this.

MULVANEY: Balance that against some of the proposals that we have talked about previously, such as getting rid of the deduction for state and local income taxes.

CAVUTO: But even if you're in the middle class and you're in those high-tax states, you would be affected by that. Right?

And, again, that's part of this discussion. That's why I think what you are seeing is the right way to handle it. It's not a precooked bill. It's not coming down from the mountain and saying, look, here's the tax plan.

CAVUTO: Do you think it will pass by the end of the year and that it will be retroactive to the beginning of the year?

In fact, when I think it passes -- secondly, yes, if it passes by the end of the year, it will be retroactive.

But as to the first question, I do. And I think, in mid-December, when the tax bill passes, people will look back at what the president did this week and say, you know what? Maybe he was right, cutting that deal in September was a big part of getting these taxes before the end of the year.

CAVUTO: Do you know whether the president is genuinely annoyed at Republicans in the aggregate, the leadership, and that's why he's reaching across the aisle, because he's fed up with them?

I just read into what he did with Chuck Schumer and Nancy Pelosi on this debt thing as a sign, I'm sick of you guys.

MULVANEY: I will answer half your question, which is, is he annoyed with the Republican leadership?

MULVANEY: Yes, I think he probably he is. And, believe me, as a Republican, so am I. As a citizen, I am, too. I was promised that they would have repealed and replaced Obamacare by now.

I'm a voter. I have a member of Congress. I have a senator. I not only made those promises to people for the last seven years when I was running for office. People made them to me.

And I was disappointed and somewhat annoyed that we haven't followed through on that promise. I don't think that's an unnatural reaction at all. And to the extent the president was annoyed by that, I think he's simply reflecting the opinion of many of the people in the country.

CAVUTO: Are you worried that he might be losing friends if he's embracing the Democrats who aren't keen on him and Republicans who feel that he always picks on them, that he's going to be last man standing?

MULVANEY: Face it. Any self-respecting Republican worth his or her salt is probably annoyed at the party as well. Not being able to follow through on the major promise is a major problem for us, and they need to fix it.