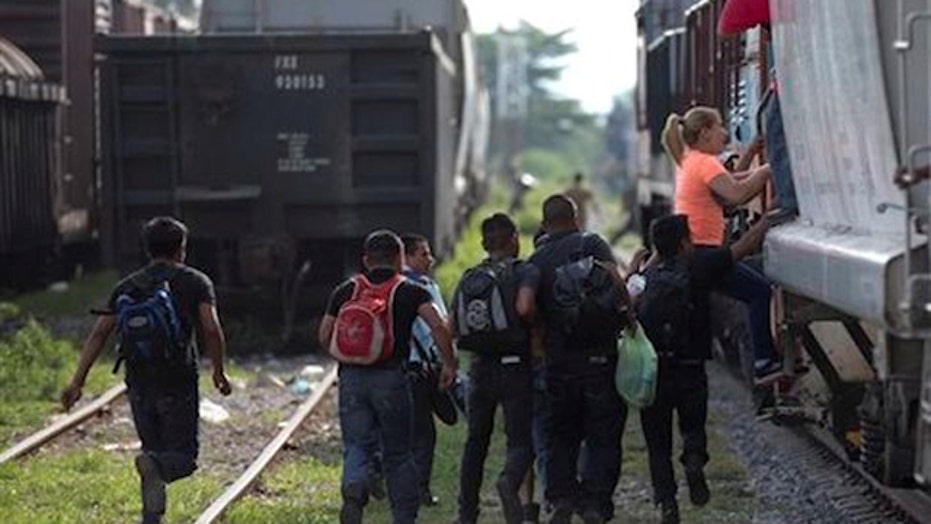 More than 600 illegals with criminal records released by ICE

MICHELLE FIELDS: They are putting the American people at risk. These are not criminals who went and stole candy. These are level one offenders and criminals meaning they murdered, raped, or have serious drug offenses. It seems as this this administration does not care about the American people. The only way for Democrats to care about Americans is if they went to Mexico, denounced their citizenship and came over here illegally.

JONATHAN HOENIG: Criminals are destructive, immigrants are productive. Of course releasing anybody with a criminal record, anyone who is a criminal is totally unacceptable. I believe we should screen all immigrants for jihadists, people with infectious diseases and more.

JEHMU GREENE: The reality is that when you take away the money to keep the detainees in there, they have to release some because their budget has been cut.

WAYNE ROGERS: How do you stop someone from doing what they shouldn't be doing? The only way to do that is to fine them. Dock their pay. Take it away for whatever it is or fine them or just fire them. It doesn't matter.

WAYNE ROGERS: I think it's a syndrome which is an addiction of the young. These are people who are essentially financially ignorant. They are very young when they make an enormous amount of money. They see the meritorious values around them, people with big cars, big houses, all of that. They get an entourage. That's a very short life. We all know that, and they run out of gas. It's all gone.

MICHELLE FIELDS: It has a lot to do with incomes varying from year to year. They have everything paid for them. They don't have good financial advice and women are expensive. When you want to divorce us, we're even more expensive. A lot of men in Hollywood find themselves getting taken to the cleaners because of divorces. That is what happened to Williams. He lost a lot of money in two divorces. They are getting divorced in California, which often times their money is taken away from them by the courts. That has a lot to do with it.

JEHMU GREENE: Specific women are expensive. I'm still numb from his passing. I think he did incredible work raising tens of millions of dollars for comic relief to help homeless people and clearly a lot of these stars have some really crumby greedy people who are managing their money and we hear all of the tales of like their taxes haven't been paid for years. Yes, they absolutely should be a little more personally responsible with who they are bringing on to their teams.

JONATHAN HOENIG: Its stars and non-stars, in my opinion, go broke for the same reason. They don't think long term. For any man to succeed he has to think long range and long term. Few people suffer from what is called the wealth effect. They spend everything they make and more. They find the feeling of having money is a lot better than anything that money could buy.

JONATHAN HOENIG: The postal service has gone down; the price has gone up over years. What other industry can make that claim? The service is terribly run. The average total compensation for a postal employee is about $80,000. That's 20 grand more than the private sector and it's not surprising why they keep this money-losing operation open, it's the jobs. 91 percent of postal union employees donate to Democrats. We should follow Europe in this case and privatize it just like postal industries in England, in Denmark and in Germany, all privately run.

MICHELLE FIELDS: We need to privatize it, I absolutely agree with Jonathan. This is not surprising. All you have to do is walk into a post office to understand why they're going broke. It's horrible customer service. Why are they wasting $2 billion a quarter just to send us a bunch of coupons and bills from Visa? Just privatize the whole thing.

JEHMU GREENE: The post office actually gets no tax dollars from us so we're not paying for it. They have to supply the treasury with $6 billion a year to take care of the retirees and health benefits.

WAYNE ROGERS: The proof of the fact is that you have FedEx and that you have these other postal services that came out of the private sector to compete with the post office. I mean 75 years ago they weren't there. They're there today and they are competing and the post office should go out of business. They should privatize it, as you said, or let them go out of business or they have to compete with the FedEx and those people.

ERIC BOLLING: Wake up, America I want to share with you. Something I found that is horrifying and shook me to the core. Check out this recruitment video, prepared by the PR wing of ISIS, a heartfelt young man walking thru a hospital. Now listen to British and Australian converts- casually calling for other westerners to join radical Islamic jihad, and here, an ISIS fighter calling out America, mocking us. These recruiting videos are extremely well made. They are slick media presentations. But these videos don't show the death and destruction that follows ISIS radicals, wherever they go there are pictures so graphic, we won't show you here, but twitter is littered with beheaded corpses, young men hanging on crosses and even young children slaughtered. These guys are for real and no, they're not your typical Muslim. They're bloodthirsty radical Islamic jihadists and they are pure evil, not the nice young men in the PR videos I just showed you, and they certainly aren't the JV team of Al Qaeda. Remember who called ISIS the JV team? Sorry, President Obama, you were absolutely wrong about ISIS, they're not the JV team; they're the freaking Green Bay Packers! Here's an idea, how about you stay off the golf course and stay in DC and deal with this. Don't worry; you can take a few extra vacation days on your annual Hawaiian extravaganza. We have work to do now, I'll see you on "The Five." Have a great weekend.