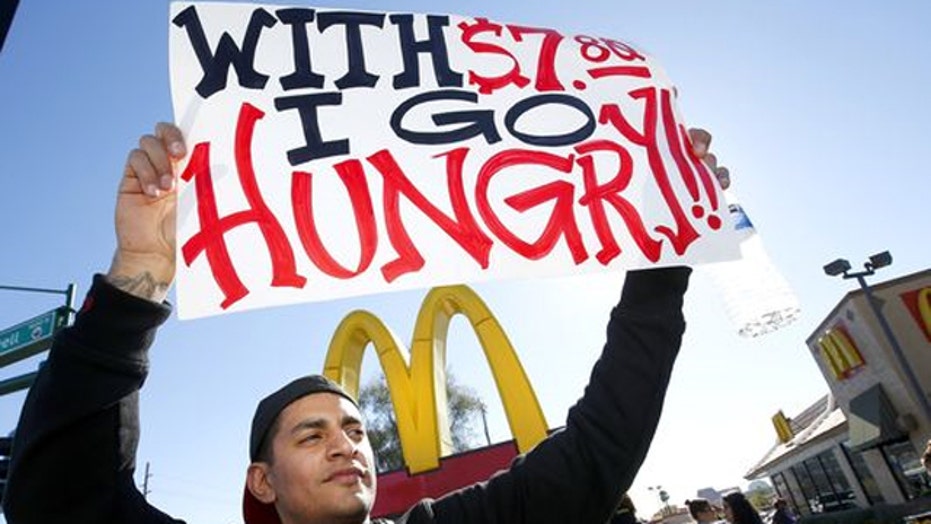 GARY B SMITH: At least most of them, Brenda. Look, the concern the cry is for the $15 minimum wage. If 100 people now are getting minimum wage, at the end 95 won't get anything and maybe five will get the minimum wage. Why? Because the $15 minimum wage, Brenda, is just a signal for companies to automate even faster. That can be automated. It's being automated in McDonald's. Now in the bank, you see one or two tellers and a row of ATM machines. You go to the supermarket and you see self-service checkout. All the jobs will go away quicker. The cashiers, the supermarket clerks, if we go to $15 minimum wage. All it is is a sign that says if you have low skills or just entry jobs, don't bother, we can automate it.

BERNARD WHITMAN: It's the absolute right time to raise the minimum wage. Doubling it to $15, no, I think that's too fast too soon, but raising it to $10.10, What Congress tried to do in the face of GOP opposition, that's the way to go. There was a study that looked out state level data from 1990 to 2006, and I am sure Gary is familiar with that, and raising wages for low wage workers does not contribute to a decline in employment. The University of California had a similar study. How can people making $7.25 raise families? It's poverty level. But $15, that's too much

JOHN LAYFIELD: I see your study and will raise you a study. You are right. There are studies on both sides, just like you said. The latest study came out to $15 an hour, and it will cost half a million jobs out there. To get people out of poverty, minimum wage is not the best way to do it, the average family that has a minimum wage worker makes about $53,000 a year, because most of these are part time, a spouse that is also working not just as the head of the family. Why $10.10? President Obama raised the minimum wage, and this is all about politics. This is all about mid-term elections. They could fix this. Believe me, they could fix it and they don't want to because they want to pitch the poor against the rich at mid terms and not talk about the economy or foreign policy.

TRACY BYRNES: Mcdonald's has been struggling lately. Their numbers are coming close as far as earnings go, and they are not blowing it out of the water like everybody seems to think. To pay them more, the big question is where the money is going to come from. Where is the mom and pop going to find the extra money to come up with the $15? I think, again, the market must dictate what these people are paid, what everybody is paid. The market dictates what we are paid. Again, you should not strive to be on a minimum wage salary for the rest of your life. Maybe we should empower ourselves and try to be better. The tax credit promotes apathy, because they know they make too much money they don't get it anymore. Everybody is expecting handouts and it's hurting the economy.

JONAS MAX FERRIS: It radically increases job insecurity. $15 is good pay. Definitely will increase the amount of people that want that job. Think of all the times you want to go to workers and do a lousy job, and isn't it like the DMV where there is no job insecurity. High productivity, you want that job and you know ten people want that job at your wage rate and you get that, and sure, consumer prices will go up, and you will see people working harder.

JOHN LAYFIELD: Yeah, we said it would happen. There is good and bad news about Obamacare. Most of the people that sign up are people that need insurance, and it's bad economically for ObamaCare because you need the young people that don't need insurance for this to work to pay for those that are older and have a lot of medical costs. That's not happening. So what is going to happen is exactly what you are seeing, fewer options in hospitals and doctors and higher premiums. We are getting a much worst system because of the way the system was set up.

JONAS MAX FERRIS: Yeah, this is the secret to limiting and lowering prices. I want to see the doctor I want to see. What fantasyland does the government or somebody else paying for your insurance have that choice? If I damage my car, and I want to paint it with flames, but they are not going to ship my car out there and pay $20,000 for a paint job, right? That's because I don't have a choice. They have the choice. I pay the premium, and insurance says you have to go to the cheap and local paint shop.

GARY B SMITH: Jonas seems to imply that it was a mad cap choice world that we had that caused prices to go up. It's really just the opposite. We didn't have choices. You couldn't buy insurance and go across state lines and you could be the go to some doctor that was not approved by some medical conglomerate. We didn't have free choice at all in health care, and that's why prices went up. Now, as far as this ObamaCare, what you have is where Jonas is right, the only way this monopoly, and that's what it is, to exist it has to control supply and prices, and of course, even then it will fail just like communist Russia did, and that's what we have, communist Russia in the '50s, and we have a force march to whatever the ObamaCare guru says what doctor you can go to, and the official says we have to get over the choice thing that's right because that's the only prayer ObamaCare has to succeed.

BERNARD WHITMAN: Gary b. Is entirely wrong this time. This insurer that said that statement had almost no market share before the Minnesota exchange went online. They decided, you know, we are going to give customers the option and have few choices, very low premium, and people flock to it because they wanted that choice. The market produced a solution that customers wanted and with lower cost it's going to come with lower choice. $8 Million have signed up. News flash. 8 Million people, it's working, and young people are also signing up.

TRACY BYRNES: Right, so those people are doing the happy dance while everybody else is suffering with the backlash of the whole thing. The system is not going to work because it's completely imbalanced. Sure, all these people signed up, but nobody has paid yet.

TRACY BYRNES: it's unfortunate because our country is so beautiful and we want to be able to live in all parts of it, in the hills and on the water, but natural disasters keep happening and we keep paying for them. I think it's really silly we keep rebuilding in places that keep getting hurt, and again, insurance premiums, we have been talking about this, they just keep going up because of what is happening. I think there is a conversation to be had here about whether or not it's smart to rebuild in these places.

JOHN LAYFIELD: Yeah, I love this place, and that's the reason I live here and I have a house reinforced for hurricane-strength winds and the house pays a higher premium. If something were to happen I would rebuild and still live here and I think people should have that choice. You can't prepare for fire and tornados like you can for a hurricane. I think they should be mandated that they do have house insurance, so there is not a federal bailout.

BERNARD WHITMAN: I agree, I think the market should dictate what happens, I think user fees and higher premiums, and unfortunately the families will have to pay for it and I don't think it's fair for the taxpayer across the board to bear the responsibility for it and I think the market should and the users and those that live in the areas will have to pay additional assessments as well as higher premiums and insurance.

GARY B SMITH: I don't think so Brenda. I am in agreement with Bernard, the market should dictate and if you want to live in a place high risk, you should have to pay higher premiums and do the kind of things that John says. The fact of the matter, Brenda, it seems like there is less and less places in the country that are safe. I am sure the people a year or so ago in New Jersey and Long Island thought they were safe until hurricane sandy came. There is flooding, you know, just in the past few weeks, and Alexandria, Virginia, along the Potomac. Tornado alley in the midwest. So you should be able to choose where you want to live, and you just have to accept there will be costs.

JONAS MAX FERRIS: The government is still on the hook for the next sandy. The government needs to tax the same people whose insurance went up to cover their costs that went up, and insurance is only half the problem and the government has to lay on taxes in these areas.

JOHN'S PREDICTION: (CSCO) THE "TRIPLE CROWN" WINNER OF STOCKS; UP 20 percent IN 1 YR